Cheltenham 2018 HOME IS THE HERO 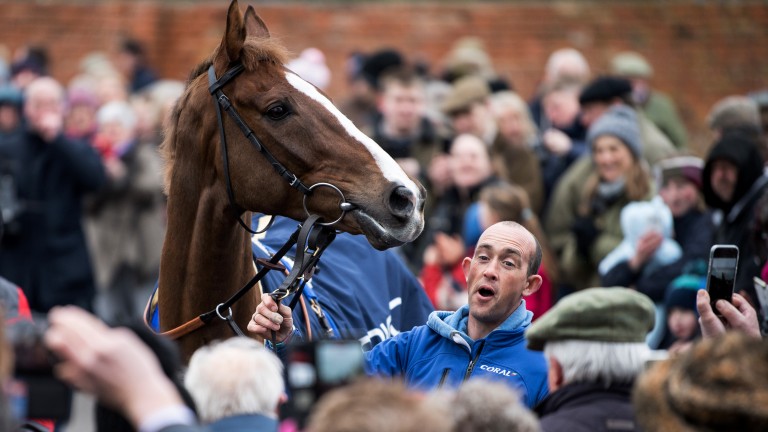 There must be 300 of us in the car park of the Virginia Ash pub in little Henstridge, about three miles and two and a half furlongs as the crow flies from trainer Colin Tizzard's hilltop empire. Native River ran that far on Friday afternoon, ran it so hard and so well under Richard Johnson that he won the Cheltenham Gold Cup. And that's why we're waiting for him in the cold.

The Gold Cup itself, the symbol of his success, has preceded him. It's swinging from the fingers of his owners Garth and Anne Broom, whose slightly shell-shocked expressions betray the fact that this belongs to them now, this is their Gold Cup. It gleams in the morning's sullen light, 24-carat, hallmarked, the real thing, passing from hand to hand through the crowd.

"It's like the holy grail," says Garth Broom as queues of people wait to take it off him, to have their photograph taken with it, to wave it in the air, to feel what it's like. It's lighter than it looks, almost flimsy, the stuff that dreams are made of.

"It's the holy grail to us, to all of us I suppose. Every horse we buy, we think 'maybe it'll be a Gold Cup horse', but of course it never is. It gets injured, or it's too slow, or it's the trip, or it's another reason. But now we've got a Gold Cup horse. It's new territory for us, it hasn't sunk in yet. Well, it's beginning to." 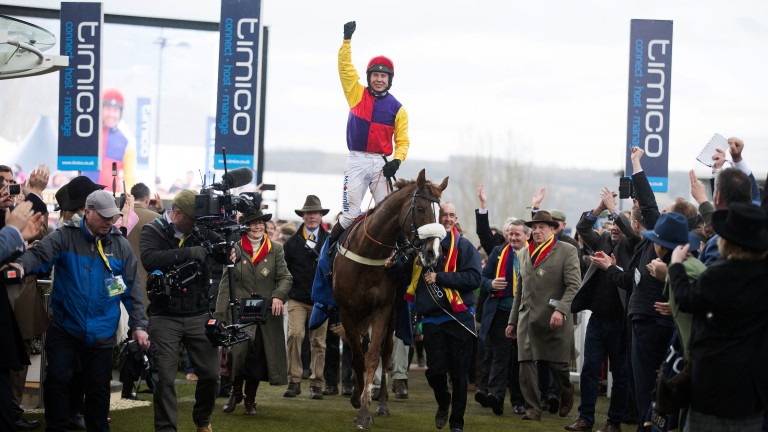 Native River and Richard Johnson walk in triumph into the winner's enclosure after the Cheltenham Gold Cup
Patrick McCann (racingpost.com/photos)

A ragged cheer from the far end of the car park coalesces into something more sturdy as Tizzard's blue horsebox pulls in. After a minute or two Native River steps cautiously out, this not what he was expecting after all that hard work the day before, his day off gone for a burton, and is met with a volley of cheers and applause, even from the loyalist wearing a Cue Card scarf.

Travelling head groom Richard Young walks him through the throng, Native River looking elegantly from side to side, wondering politely what the hell is going on, looking as fresh as he did in the parade ring at Cheltenham.

He's the freshest of the lot, you'd bet. If the Tizzards – Colin, son and assistant Joe, daughter and assistant Kim, wife Pauline – had gone home with the milk the previous evening no-one would have been in the least surprised. They stopped off at the Virginia Ash – owned by John Romans, whose Elegant Escape was third in the RSA Chase on Wednesday – on the way back from Cheltenham to see if anyone had heard the result of the big race.

"It was pure magic," says Katie Garland, who runs the pub with Viv Cooper. "When Colin walked in the place erupted, there was singing, there was champagne, there was party-poppers. It was a wonderful night. No-one went home early."

Tizzard grins widely at the memory. Draped over the optics behind the bar is a red, purple and gold Native River scarf, which would have been helpful outside a little earlier.

"It's the pinnacle," he says. "It's something I've been looking for most of my life. It's the race everyone wants to win and now I've won it.

"We ran Bob Bob Bobbin in the Gold Cup one year [2007] just so we could say we had a runner in the race. Now look what's happened. It's been brilliant, a brilliant day. I'm so proud of the horse, so proud of the staff."

His staff are at the bar, picking up where they left off last night, although no-one was a minute late for first lot. Tizzard was there to check.

"Colin drove into the yard first thing this morning, beeping his horn, punching the air," says groom Jules Shergold. "That's what it feels like to win the Gold Cup.

"We all had hangovers but it didn't matter, it doesn't matter when something like this happens. To be part of this is second to none. We're not the biggest team in racing but we all work hard and the boss is brilliant, we're all so pleased for him."

Outside the wind is blowing with increasing urgency, but Native River is warm inside his Timico rug. Young walks him up and down again for the cameras while his groom Hameer Singh, who must have done something wonderful in a previous life because he also looks after Cue Card and Thistlecrack, talks slowly and happily to the media about his day of days. Broom holds up his Gold Cup for the umpteenth time, the umpteenth photograph, and it begins slowly to fill with snow. "It's only a little cup," he says; mind you, so was the Holy Grail.

Earlier this season, a long time ago now, on a bright October morning Tizzard had sat in his unfussy office to do a stable tour for this newspaper, and when the conversation turned to Native River he said a few things and then he said: "If he has an easier time of it through the season he might just win a Gold Cup."

Funny how things turn out. Once upon a time Tizzard was a dairy farmer with a few horses for a pastime, and pipedreams for company.

Now the dreams have come true and if in the glare of the media spotlight he has a faraway look in his eye it's not difficult to work out why. And around here, where Dorset and Somerset rub up companionably against each other, and where 300 people turn out on a bitter morning to wait for a horse, the sort of horse people wait a lifetime for, they will talk about Native River and his golden afternoon until the cows come home.