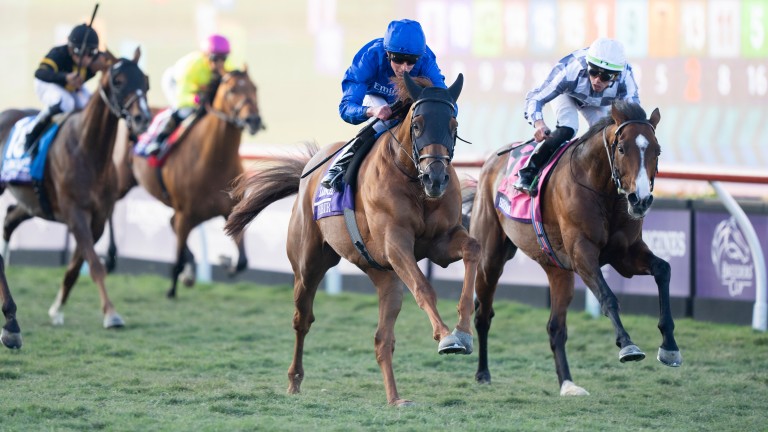 Yibir (near): stormed home for Turf success
Edward Whitaker (racingpost.com/photos)
1 of 1
By Richard Forristal at Del Mar UPDATED 9:13AM, NOV 7 2021

Charlie Appleby, who has had a rollercoaster couple of days in California, took his sensational Breeders' Cup record to six winners from just 11 runners when Yibir motored home to deny Broome in a thrilling climax to the Turf.

William Buick's mount raced ferociously keenly early on, but finished to devastating effect from an unpromising position to seal a remarkable third win at this year's meeting for both trainer and rider. Yibir and Broome led home a British and Irish 1-2-3-4, with Teona and Japan filling the other places.

Juvenile Turf scorer Modern Games and Mile hero Space Blues were the other two winners for Buick and Appleby at Del Mar.

Buick, who shook his head in disbelief crossing the line, said: “It’s amazing to have this amount of success on the world stage and I’m lost for words really. I’m in a very privileged position to work for Godolphin and ride these great horses. You take on the best jockeys and best horses at the Breeders’ Cup, so the last two days have been unbelievable.

“I can’t believe what Yibir did today. He was pulling my arms out for the first half of the race and I thought we were in trouble. He was amazing and picked up really well.”

The winning trainer said: “I’m delighted for the team and they’ve done such a fantastic job. A lot of credit goes to Shane Fetherstonhaugh, as he rides Yibir out and he’s not the easiest character.

“To have three winners on this world stage is fantastic and it’s been a great weekend for team Godolphin.” 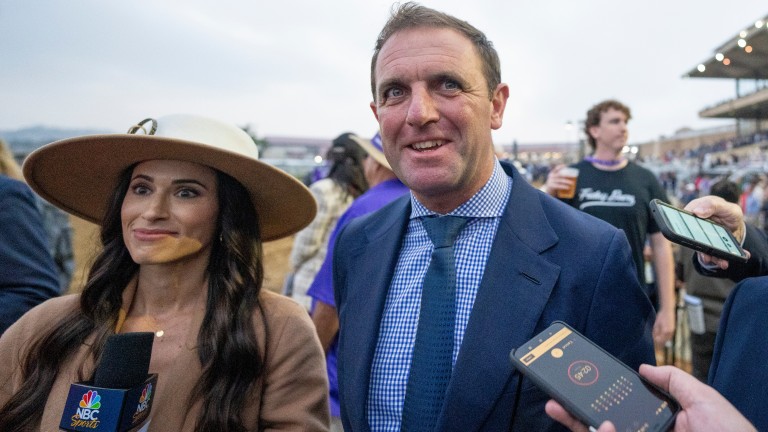 Ahead of the Mile, Appleby had an eerily similar experience to the one that saw Albahr and Modern Games scratched from the Juvenile Turf on Friday, before Modern Games went on to sensationally win the race after being reinstated for purse money only.

This time, Master Of The Seas was scratched after rearing up in the stalls under James Doyle, leaving Space Blues to record what was an emotional win for Appleby. It was Space Blues' final run for the stable, and sending him off in such poignant style was bittersweet for the trainer.

After the Turf, he reflected on two helter-skelter days.

"I don’t know how to describe it really," he laughed. "There’s been a lot of emotions. Yesterday we had two potentially scratched and one got reinstated back into the race. I felt sorry for the crowd, their winning tickets didn’t come off with Modern Games, but that’s not the horse’s fault. It was great to see him win the way he did.

"Then today, standing there again before the Mile, to see what was potentially unfolding in front of us, it took a bit of stepping back and having to take a breath again. I just knew the right horse was left in the gate in Space Blues. He was always going to be the main player. Yibir in the last was the icing on the cake. It's been great."

The Roger Varian-trained Teona finished well and ran with great credit in third on David Egan's first ride at the world-renowned meeting. 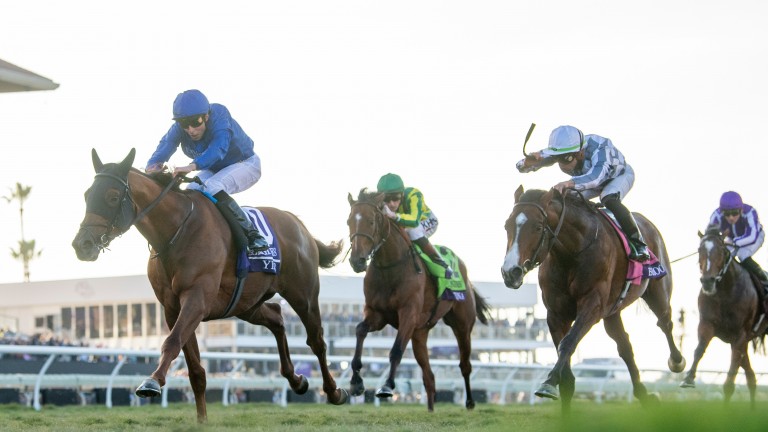 "She is a lengthener really," Varian suggested afterwards. "She stays really well and when David angled out of the home bend, if he just had a kick, a bit of acceleration, she could have put the race to bed.

"But she just lengthens, and she was arguably strongest at the line. You’d argue it isn’t her ideal track, and she is lightly raced, so I think she has run with great credit. Hopefully she is fine after the race and I’m sure she will be in training next year so there’ll be some big races to aim her at. She is very exciting."

Last year’s winner Tarnawa raced in rear from her wide draw and made little headway in the straight, finishing in mid division. She was last seen finishing second to Torquator Tasso in the Prix de l'Arc de Triomphe, and her rider Colin Keane felt that knocked the edge off her.

"I’d say just the Arc run has taken it’s toll on her to be honest," said Keane. "She just felt like a filly that was flat. It was a true run race, but, from halfway when I needed her, she wasn’t there. The writing was on the wall a long way out unfortunately."

Yibir, following the likes of Enable, Highland Reel and Found, became the sixth European-trained winner of the Turf in last seven runnings.

FIRST PUBLISHED 11:57PM, NOV 6 2021
I can't believe what Yibir did today. He was pulling my arms out for the first half of the race and I thought we were in trouble