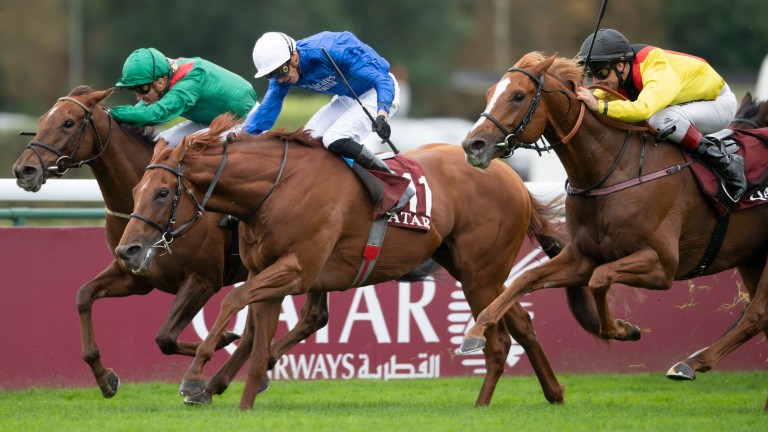 Dermot Weld believes Tarnawa would have won the Prix de l'Arc de Triomphe had the rain stayed away on Saturday evening but was bursting with pride at the way the runner-up battled on heavy ground.

The five-year-old, who was a big market drifter, had every chance in the final furlong but could not match shock winner Torquator Tasso, who scored by three-quarters of a length.

There were no obvious signs of dejection from the trainer in the packed parade ring, only a glimmer of regret that his stable star arrived in peak condition but could not quite show her very best.

"She ran a super race and battled well," said Weld, fully aware of the thin line between triumph and disaster. "She was in tremendous order coming here and got a great ride from Christophe [Soumillon].

"She tried hard and we've got no excuses but you saw the stamina of Tarnawa, not the speed, which was nullified on the testing ground. If we hadn't had so much rain on Saturday night, we'd have won.

"I started to worry as soon as the rain came. She's got a lot of pace, which you saw when she won at the Breeders' Cup last season and in the Irish Champion Stakes, but she just couldn't quicken today – she handles soft but didn't have the speed on that gluey ground."

Weld has won big races all over the world since he began training in 1972 and was philosophical after coming so close to winning his first Arc, adding: "It's a tough game and these are the knocks you take."

Soumillon, who took over from regular rider Colin Keane as the Aga Khan's retained rider in France, agreed with the trainer and said Tarnawa would have been the "lead actor" on slightly better ground.

"I'm not disappointed because she's run a fantastic race and we have nothing to be ashamed of," he said. "The winner had half a length or three-quarters of a length on me all the way up the straight. If we’d been beaten a nose you might think you were unlucky and I would have been disgusted but the ground was sadly just a little too sticky.

"I had a wonderful trip and she broke well, which I had been a little bit worried about. I had a dream run and pulled her out with 400 metres to go but as soon as I saw the German silks I knew it would be tough. I'm delighted with Tarnawa – Dermot and his team have done an unbelievable job getting her here after two runs this year.

"I hope she has the chance to win another good race abroad. She's a superstar and being second in the Arc is nothing to be ashamed of. I think on slightly better ground she would have been the lead actor."

Tarnawa may not have to wait long to take centre stage. Weld said a return to the US was a "definite possibility" next month and she was cut to 7-2 (from 11-4) to win her second Grade 1 Breeders' Cup Turf.

FIRST PUBLISHED 6:00PM, OCT 3 2021
She ran a super race and battled well. She was in tremendous order coming here and got a great ride