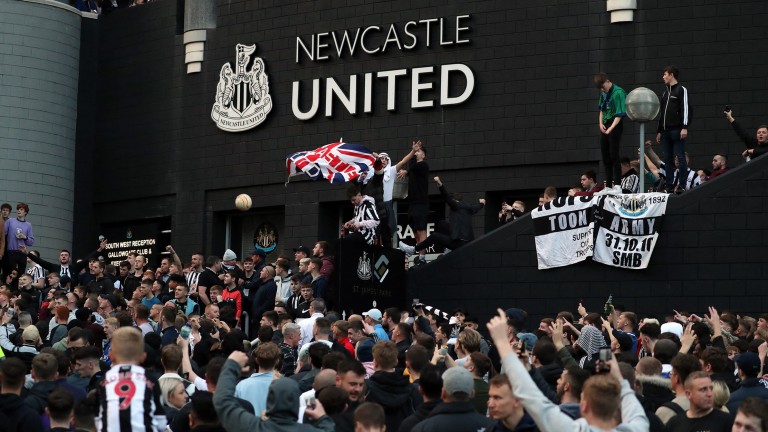 It was the takeover that launched a thousand questions, as everyone scrambled to understand the implications of the acquisition of Newcastle United by Saudi Arabia’s sovereign wealth fund.

But one rather important query seems to have been largely overlooked amid the debates this hugely controversial and intriguing change of ownership has sparked: which division will the club be playing in next season?

I am amazed at how willingly most people are assuming it will be the Premier League.

I suppose the case for this is built on the fact that Newcastle have, despite the almost permanent sense of doubt and unhappiness that has hung over St James’ Park in the last years of Mike Ashley’s ownership like a fog on the Tyne, found staying up reasonably easy in the four completed seasons since Rafa Benitez led them back into the top flight.

Under Benitez and then Steve Bruce they have been remarkably consistent, finishing with (most recent first) 45, 44, 45 and 44 points and never ending up fewer than ten points from the drop zone.

Add that to the unprecedented wealth of the new owners, with promises of an elite level manager and world-class players, and on the face of it things are looking rosy for the Geordies.

“Manchester City, we’re richer than you,” they sang before Sunday’s first game since Ashley cashed in, and given there is a strong correlation between wealth and success in football it is likely at some point Newcastle won’t just be richer, they will also be better than City and indeed every other club.

But the date of that eventuality might well be delayed by at least a year, because I have Newcastle a good bit shorter than public opinion and, more importantly, the bookies to take a backward step before they can accelerate to the peak of the game.

You can back them at 2-1 to be relegated, and that is a value bet.

I need to dent my own argument at this moment by pointing out Newcastle started the 2018-19 season with only two points from their first nine games and went on to stay up comfortably.

However, recoveries like that are rare and the key area of concern for Newcastle’s new owners should be that not only have they begun this season poorly, with three draws and five defeats from eight matches, but they face an extremely tough set of fixtures before they are able to field new players.

That first opportunity will come on January 2, at Southampton, a game put back a day for TV purposes, although how many fresh recruits will be available so near to the opening of the transfer window is questionable.

In the meantime they must play the following 12 league games with the squad they currently have: Palace away, Chelsea home, Brighton away, Brentford home, Arsenal away, Norwich home, Burnley home, Leicester away, Liverpool away, Man City home, Man United home and Everton away.

Given they have managed just three points from a softer opening run of tasks, it is hard to have them in for any more than ten from that dozen assignments, and it could be fewer.

If it starts to look like the spending will be so lavish and extensive that many of the current squad realise they face the first half of 2022 on the bench, in the stands or elsewhere, there is a decent chance that morale, already reported to be low, could slump further.

And that would then present another problem. If Newcastle find themselves with fewer than 14 points after 20 games they will become a less attractive proposition for the kind of new signings they should want to make, ie those hungry for success rather than just money.

The sort of players who could make a difference may well think twice about joining a club if it looks like they will be playing Luton rather than Liverpool come August, leaving only those from the mercenary category to come in and attempt to win a relegation battle.

The bottom side in the Premier League after 20 games have been on 13 points in three of the last four seasons, which gives an indication of the size of the task whoever replaces Bruce will face unless the current squad picks up points more successfully than the difficulty of the upcoming schedule suggests.

The creative magnificence of Allan Saint-Maximin, the goals of Callum Wilson and the ability of the incoming manager to pull the squad together and get them scrapping will be crucial if Newcastle are to avoid the new dawn starting under leaden skies.

They are not a bad side - indeed their 1-1 draw at home to Leeds last month was one of the most entertaining games to feature under 2.5 goals I have seen in ages.

But they are brittle, and three points in eight games leaves them in a far more vulnerable position than many seem to realise.

Perhaps it will be fine. A mustard new gaffer may come in and create a better spirit, and then when the big-name players arrive in January they could surge up the table and this column will be gleefully dredged from the internet and retweeted numerous times along with the ever-hilarious line “this aged well”.

And if it does, I won’t hesitate to own up to a bad call. But at 2-1 I’m happy to put my money where my mouth is and back Newcastle to have to delay their probable rise to the pinnacle of English football while they spend a season as what would surely be the hottest ante-post favourites for an EFL division since betting began.

FIRST PUBLISHED 5:00PM, OCT 20 2021
Not only have they begun this season poorly, with three draws and five defeats from eight matches, but they face an extremely tough set of fixtures