Bryson DeChambeau and Collin Morikawa could be set for thrilling shootout 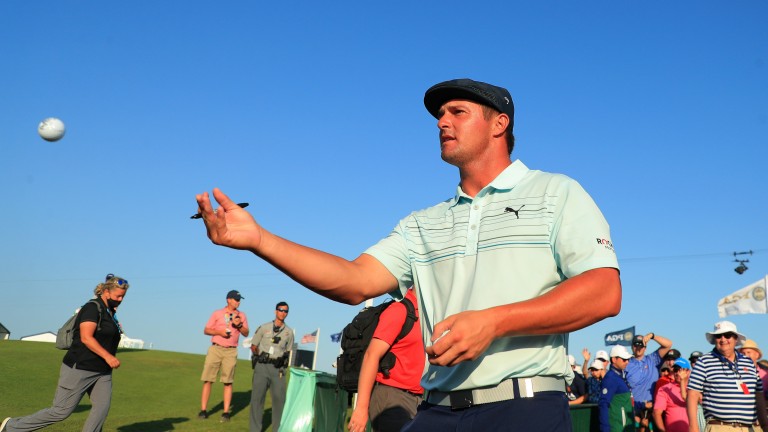 Louis Oosthuizen carded a glorious eagle at his final hole of round three to propel himself into a share of the US Open lead, claiming favouritism at Torrey Pines, California, going into Sunday's conclusion.

Oosthuizen, who has finished runner-up in each of the America-staged Majors but has never won a Stateside event, has reached five under par through 54 holes. The last-gasp heroics on the 18th green - a 52-foot eagle putt - brought him level at the top of the leaderboard with Russell Henley and Mackenzie Hughes.

Oosthuizen, a pre-tournament 50-1 chance, has become a general 7-2 market leader. Henley was 200-1 on Wednesday, while Hughes, who missed five cuts in a row on the PGA Tour before heading to Torrey Pines, was freely available at double those odds.

Bookmakers will be hoping the leading trio stay in front - because several much-fancied runners are lurking just behind, including well-backed pre-event favourite Jon Rahm. The Spaniard was 7-2 going into the weekend, but a double-bogey at the 14th dented his challenge and he ended up three shots off the pace.

Bryson DeChambeau and Rory McIlroy are only two shots behind, while Dustin Johnson, Collin Morikawa and Xander Schauffele are four off the lead, knowing a strong final round will give them winning hopes too.

The good news for UK and Irish punters is that the final US Open twoball is scheduled to tee off at 8.55pm, so the closing round will end mercifully earlier than the previous three, unless it goes to a playoff. The bad news is that identifying who will be lifting the trophy in the wee small hours of Monday morning is devilishly difficult.

Narrowing down the long list of contenders is the task for the betting community. Mackenzie Hughes and Russell Henley are perhaps the easiest to knock from punting plans. Hughes was in terrible form prior to this week and has an abysmal Majors record, never bettering 40th place. Henley was unconvincing in his post-round media conference, wondering out loud whether he would ever get another chance of Major glory, mentioning his age (32) as if time was running out for him. Given a 50-year-old has just won a Major, these were peculiar musings. The lack of self-belief was palpable.

Louis Oosthuizen seems by far the most likely winner of the front three - a Major champion who strongly contended in the US PGA a month ago - but he has never won Stateside. In the Zurich Classic pairs event alongside Charl Schwartzel in April, Oosthuizen badly sliced a drive into water in the playoff to blow another golden opportunity of a long overdue breakthrough in America.

Can Oosthuizen hold himself together if Rory McIlroy, Bryson DeChambeau, Jon Rahm, Dustin Johnson, Collin Morikawa and Xander Schauffele charge at him?

Expect the USGA to impose the back tees and let the drying course provide a hugely demanding final round, bringing the five under par leading score closer to par.

Oosthuizen has been swinging well enough to relish the added difficulty. But it seems almost certain he is going to have one or two of the world's best players challenging him down the stretch. Another Stateside Major bridesmaid role may be coming.

McIlroy has a long Major-winning drought to overcome and may not be entirely comfortable with his technique amid swing changes, Johnson has been struggling to find his A-game for months, while Schauffele has become the PGA Tour's nearly-man.

The best options, then, may be DeChambeau, Rahm and Morikawa. DeChambeau has warmed to his task as the week has gone on, improving his score each day, holing long putts at key moments in his round. The Californian has the scent of home-state glory in his nostrils and has forged an encouraging buffer between himself and his rival Brooks Koepka. A successful title defence for DeChambeau is definitely on.

Rahm loves Torrey Pines and found peak form in his previous tournament. He is still well in the hunt, but has never won a Major and will do well to forget his nightmare on Saturday at the 14th hole, where he imploded on the green. That gutbusting double-bogey may be the moment where Rahm lost his grip on this event.

Perhaps then, a shootout between DeChambeau and Morikawa is in the offing. Morikawa did not appreciate the soft, soggy, murky conditions of Thursday morning after a marine layer had enveloped the course, carding a 75 which left him tailed off. But in firm, fast conditions since, the rock-solid Californian has been in his element, finally getting under par for the tournament with an up-and-down from the bunker at 18 on Saturday.

From four shots off the lead, Morikawa has little margin for error, but the 2020 US PGA champion can be expected to hold his score together, hoping for those around him to crumble on potentially the most difficult set-up of the week.

Punters who can access the 80-1 dual-forecast offer about DeChambeau and Morikawa should consider that, but maybe a better option is just to back both each-way at current best odds. Hills are offering Morikawa at a best-price 28-1 and with the best each-way terms (fifth the odds, four places).