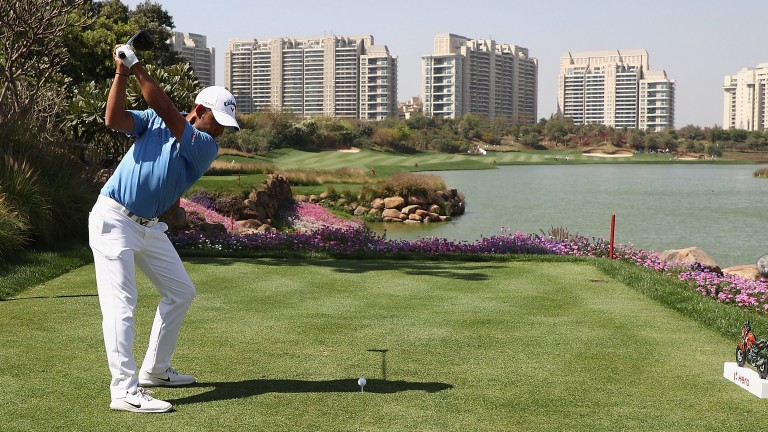 Jorge Campillo has shrugged off a dismal spell of form to assume the lead going into the final round of the Qatar Masters at Education City Golf Club in Doha.

The Spaniard, who has results this year of 34-MC-MC-67-MC, was a 125-1 chance ante-post for Qatar glory. Three steady rounds have seen him reach 14 under par, though, and no bigger than 12-5 is available with 18 holes to play.

Campillo made his European Tour breakthrough in the Hassan Trophy last year – winning in Morocco by two shots – but that success came when he was on a run of superb form. He has missed 11 cuts since that victory and a Qatar triumph would be completely out of the blue.

Two Tour maidens – David Drysdale and Jeff Winther – are tied for second place. Another one – Benjamin Poke – won Q-School last year to book his place on the circuit and the Dane lies alone in fourth spot at Education City GC.

Jorge Campillo has burst into life in Qatar and the man who enjoyed form figures of 2-2-20-3-1-3 from the first week of March onwards last year has found his mojo again 12 months later.

Campillo has a golden opportunity to turn this sudden resurgence into a trophy, given that three maidens head the chasing pack. David Drysdale is a likeable 44-year-old Scot who has spent a long career being disappointed on Sundays, while Jeff Winther, although one of the circuit's great characters, has always been too inconsistent to get over the line in front.

Benjamin Poke, lacking top-flight experience and adopting a hugely unconvincing pre-shot routine, may also struggle to retain his place in the thick of things.

On a sunny day, with only light to moderate breezes forecast, Campillo can be expected to go extremely close to a second European Tour title. But the gauntlet may be thrown down by one of his compatriots. Pablo Larrazabal seems a terrific price at 10-1 to turn a share of fifth place – only three shots off the pace – into the sixth victory of a distinguished European Tour career.

Larrazabal has won some top-class titles and fended off some world-class opposition in the process – for example, the French Open with Colin Montgomerie behind, the BMW International by beating Sergio Garcia in a playoff, the Abu Dhabi Championship by edging Rory McIlroy and Phil Mickelson – so a Qatar Masters with Campillo, Drysdale, Winther, Poke and Co as his rivals holds no fears whatsoever.

And it has been 'name on the trophy' stuff for Larrazabal ever since he closed with back-to-back birdies in round two this week when he was sitting on the cut mark. That last-gasp spurt, which included an enormous holed putt, was followed by a round-three 63 highlighted by two eagles.

Larrazabal came home in just 29 shots – a six-under-par back-nine – and he must be relishing the possibility of following his 2014 Abu Dhabi joy with further desert glory.

Despite suffering badly with blisters in the final round of the Alfred Dunhill Championship in December, Larrazabal won that event, showcasing the putting touch and bottle which has made him a European Tour fixture for more than a decade. If Campillo shows any sign of weakness in front at Education City GC, expect his fellow countryman to be waiting to teach him a lesson.

Campillo, Winther and Drysdale are scheduled out in the final threeball at 11.25am local time (8.25am UK and Ireland).