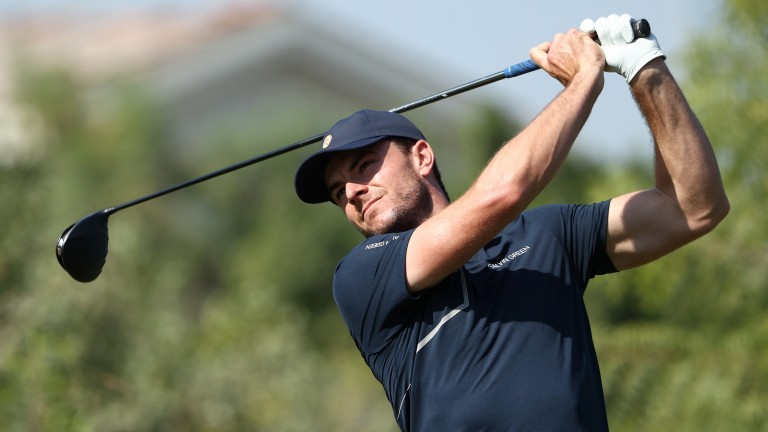 Golf tips, best bets and player analysis for the Canary Islands Championship at Golf Costa Adeje on the European Tour.

Live on Sky Sports Golf from 2pm on Thursday

South Africans have been dominating the Canary Islands Swing of the European Tour, with Garrick Higgo and Dean Burmester bombing their way to 25-under-par totals and comfortable victories in Gran Canaria and Tenerife respectively.

Both Higgo and Burmester are well capable of further glory in this week's Canary Islands Championship, but bookmakers have made them understandably short odds, meaning the value arguably lies elsewhere.

Golf Costa Adeje may provide the stage for Laurie Canter to make his European Tour breakthrough on Sunday. The Bath man was at a disadvantage in the Tenerife Open, having not competed in the Gran Canaria Lopesan Open on a similar track the week prior, but with 72 holes under his belt it is reasonable to expect much better in the Canary Islands Championship.

Canter had not played since the Qatar Masters in the middle of March, so there was no disgrace in producing two good rounds and two bad ones last week. He closed with a 73, but was three under par for his final eight holes, signing off with some confidence.

Canter is extremely long off the tee, so the plethora of par-five holes at Costa Adeje are meat and drink to him, and there could be fireworks this week if he rediscovers his brilliance of last season. Second place in the Portugal Masters was followed by second in the Italian Open, fifth in the DP World Tour Championship, then fourth in the Dubai Desert Classic in January.

Three of the last four European Tour events staged in Tenerife have been won by an Englishman, and Canter is well equipped to bolster that statistic. He won the 2011 Spanish Amateur Championship.

Mercurial 31-year-old Frenchman Victor Dubuisson is yet to fulfil his enormous potential - he has only two European Tour titles in his locker - but there have been signs of focus and form returning in the last few months. The former world number one amateur and 2014 Ryder Cup star has the ability to tear Costa Adeje to shreds.

Dubuisson finished 16th and seventh in the two Kenya Swing events last month, then finished 21st in Gran Canaria, firing a second-round 62. Last week he missed the cut by a shot, but he was third for greens in regulation on the Friday. A double-bogey five at his opening hole cost him dear, but he played rock-solid golf for the remaining 17 holes. If Dubuisson can warm his putter, the Andorra-based enigma may complete an overdue Tour hat-trick.

Big-hitting Italian Guido Migliozzi possesses the tools to destroy the par fives at Costa Adeje, and he made an eagle and 22 birdies in the Tenerife Open. Three cardbusters meant a 33rd-place finish, but Migliozzi has been generally impressive over the last couple of months, finishing second in the Qatar Masters, 12th in the Kenya Open and 15th in Gran Canaria.

A third Tour title could be coming soon for Migliozzi, while Sebastian Garcia Rodriguez and Robin Sciot-Siegrist could also make an impact.

Garcia Rodriguez has a fantastic record in his homeland - he won an Alps Tour event in Spain in 2017, has twice finished runner-up on that circuit in Spain, and was runner-up in the 2019 Challenge de Espana. It is also worth noting his runner-up effort in the 2019 Open de Portugal and his sixth place in the Portugal Masters last year.

Garcia Rodriguez was fourth and 14th in the two Kenya Swing events, then eighth in the Tenerife Open last week. Sciot-Siegrist finished 22nd last week, making three eagles, falling in love with Costa Adeje. The 27-year-old French left-hander was second in the Challenge Tour Grand Final in Mallorca and has a good record in the Costa del Sol Match Play. He won on the Challenge Tour in 2017 and could go close to a main-tour breakthrough on Sunday.

Sami Valimaki
The Finn closed with a 66 for 22nd place last week, having not competed since February. Further improvement can be expected this week.

Sean Crocker
The American has been hitting his ball well for months, struggling on the greens. A share of 18th place in the Tenerife Open may be followed by a top-ten finish on Sunday.

Scott Hend
The power-packed Aussie, revelling on the numerous par fives, has the game to contend at Costa Adeje and finished tied for eighth on Sunday.

Adri Arnaus
The Spaniard, a huge driver, is perfectly at ease on the Costa Adeje layout and tied for eighth spot on Sunday. Can he get his typically unruly putter to behave?

When to bet By 8am on Thursday

Course overview Golf Costa Adeje hosted the Tenerife Open last week and stages the Canary Islands Championship this week. The European Tour website indicates that the yardage will come down from 6,857 to 6,816 for this event, while the eighth will become a par-five hole, with the par increasing to 72. It remains to be seen whether this is the case. There will be six par fives in operation if so. Golf Costa Adeje hosted the 2003 Spanish Open won by Kenneth Ferrie. There was a Challenge Tour event in Tenerife - at Abama Golf Club - in October, 2005, which was won by John Bickerton, so Englishmen have a good record of success in Tenerife. The holes are short by modern standards - with only the 241-yard par-three tenth offering a significant challenge to professionals - so scoring should be extremely low unless there are strong winds. Dean Burmester reached 25 under par last week. The Jose Gancedo design, built on banana plantations, has paspalum grass fairways and TifEagle bermuda grass greens. The fairways on this straightforward resort course are wide and welcoming.

Type of player suited to the challenge Powerhouses carrying a hot putter can overwhelm the track unless the wind gets up, as demonstrated by Burmester last week