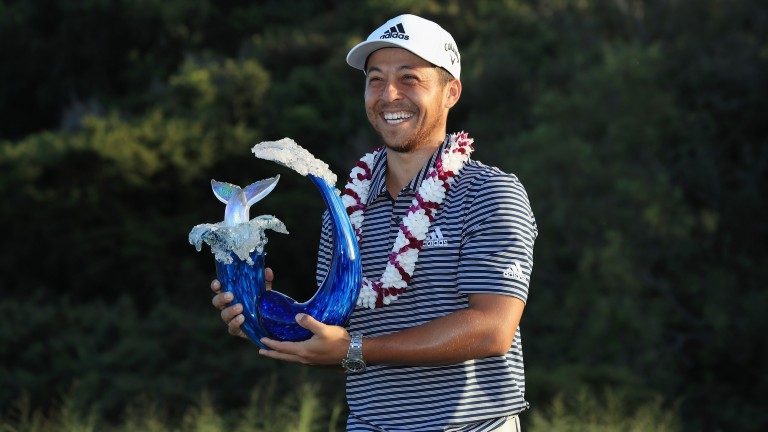 Golf tips, best bets and player analysis for the Hero World Challenge at Albany on the PGA Tour.

Live on Sky Sports Golf from 6.30pm on Thursday

Tiger Woods is already stealing the show at the Hero World Challenge this week, explaining his future plans to reporters who have been starved of sport's greatest star, but punters must focus on the 20 players lining up on the Albany fairways.

Rory McIlroy and Collin Morikawa, who have battled for the CJ Cup and DP World Tour Championship titles recently, head the betting for the Hero. McIlroy repelled Morikawa to win the CJ Cup in Las Vegas, but got swallowed up by the American in Dubai.

Both McIlroy and Morikawa are making their course debut this week at an Albany track which has staged this event since 2015, so that is enough to make the pair of market leaders avoidable at short odds. Justin Thomas is more tempting at a slightly bigger price, but his putting confidence remains extremely low.

The Hero World Challenge is a PGA Tour event - and something that Xander Schauffele would dearly love to win. His last Tour triumph came in January 2019, so the victory drought may soon stretch to three years. For such an elite player, that is a remarkable winless streak.

Schauffele, technically weakness-free, has let lots of winning chances slip through his fingers, but claiming the gold medal at the Olympics in August restored some self-belief. With so many of his rivals probably switching off mentally as the calendar reaches December, the Hero seems a fantastic opportunity for Schauffele to land some overdue silverware.

Since the Olympics, the Californian was the third-best scorer in the Tour Championship, then he made a superb Ryder Cup debut, scoring three points from four matches and leading the American celebrations.

Schauffele has finished eighth and tenth in his two Hero starts at Albany. This time he can be expected to strongly contend. His last Tour success came at Kapalua and he will be relishing more island golf this week. Three of his four PGA Tour wins have come in small-field, no-cut events like this one.

Another player carrying enough motivation to justify a betting investment this week is Bryson DeChambeau, who was defeated 5&3 by Brooks Koepka in The Match last Friday. That emphatic failure in the made-for-TV joust against his arch-rival will have left DeChambeau seeking positive Hero headlines.

The musclebound Californian was surprisingly rusty and underprepared for The Match, explaining afterwards how he had not touched a club for weeks, and he should come on for the run.

DeChambeau, wearing shorts and handing out cakes on the first tee, did not have his game-face on for Koepka. Intensive practice since should result in a more dangerous DeChambeau in the Bahamas.

Albany has been his close-season practice base since 2016, so he does not need to spend any time this week getting to know the track. He can concentrate on sorting out his iron-play, which was his main issue against Koepka.

DeChambeau was excellent in the FedEx Cup playoffs and unbeaten through three matches in the Ryder Cup. He thrashed Sergio Garcia in the singles and became an American hero. The events of Whistling Straits have much improved DeChambeau's relationship with the Stateside galleries.

The Tour's longest driver is yet to make an impact in the Hero. He carded an eagle and 22 birdies on his debut in 2018, but too many mistakes meant he finished 12th. This time - on a course he knows well and with five par-fives to attack - expect big Bryson to contend.

Complete a team of dependable, efficient putters with Justin Rose. Scoring should be extremely low this week, so chances must be converted on the greens. Rose has spectacularly turned his putting from a weakness to a strength and will be looking forward to attacking a familiar layout.

Rose lived in the Bahamas for many years and still spends lots of time practising there. He has probably prepared more thoroughly than anyone for the Hero, given how important it is that he collects plenty of world-ranking points from the event. The Englishman is 47th in the world rankings, so will be looking to use the Hero to cement his position in the top 50.

Rose, fuming to miss out on the Ryder Cup, is, like Schauffele, winless since January 2019, on the PGA Tour. The Hero represents a golden opportunity for Rose to do what his pal Henrik Stenson did at Albany two years ago - stabilising a faltering career with a timely trophy.

Rose, 12th in the RSM Classic last time out, can boast form figures of 5-3-5 from the last three World Challenges at Albany.

Brooks Koepka
The comfortable manner of his Match success - and the fact his putter purred - may provide the injection of confidence the Floridian needed to improve his dismal recent PGA Tour form.

Jordan Spieth
The Texan became a father to son Sammy just over a fortnight ago, so is full of positive vibes. How much practice has he done since? His Albany record is excellent.

Viktor Hovland
The Norwegian is one of many dangerous debutants in this elite field. If he takes a shine to the layout, there is every reason to believe he will feature on the leaderboard on Sunday.

When to watch Live on Sky Sports Golf from 6.30pm on Thursday

Course overview The World Challenge's traditional home was Sherwood Country Club, California, where it was staged from 2000 to 2013, but it moved to Isleworth Country Club, Florida, in 2014, then to Albany in 2015. Albany is a luxury resort on the island of New Providence, which opened in December, 2010. Ernie Els designed the course and is a member there, along with Tiger Woods and Justin Rose. The straightforward, open, relatively rough-free, links-style track has five par-fives, five par-threes and eight par-fours, encouraging aggressive golf. The field size has increased from 18 to 20 this year.

Weather forecast Sunny throughout, temperatures around 28C, with light to moderate breezes

Type of player suited to the challenge Bubba Watson overpowered Albany in 2015, going 13 under par for the five par-fives and 12 under par for the rest of the course. Big-hitters carrying hot putters can destroy this track