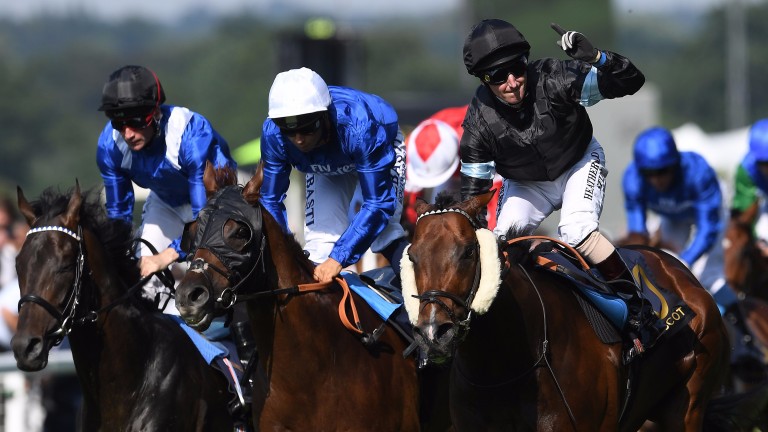 Zhui Feng chose the hottest June day since 1976 to end a Royal Ascot drought that stretched back to the start of the millennium for Amanda Perrett in the Royal Hunt Cup.

Since Give The Slip gave his rivals the slip to land the 2000 King George V Handicap there have been numerous places but no wins for the stable whose illustrious royal meeting winners include dual Gold Cup winner Sadeem and To-Agori-Mou.

In one of the most competitive handicaps of the season everything fell right for Zhui Feng, who gave Martin Dwyer an armchair ride, taking advantage of his stands' side draw to make all and hold Blair House by half a length, with Tashweeq a neck back in third.

The 25-1 winner, owned by John Connolly and Odile Griffith, was stepping up a furlong after finishing third in the Victoria Cup at the same track.

Perrett said: "He ran really well in the Victoria Cup and we freshened him up. We were lucky with the draw, lucky with the way the race was run, but it's nice to have a bit of luck on our side for once.

"Martin rode Tungsten Strike for John and Odile on many occasions in Group races. He's a great judge of pace and very experienced.

"It's tough to win here. We've had plenty of placed horses in the meantime but it's great to get the win. It's been a long time since Give The Slip."

Dwyer was ending his own barren spell, the Derby-winning jockey having not scored at the meeting since a Buckingham Palace Stakes win in 2011.

"It's the hardest meeting in the world to have winners at and it's a great feeling to have one," he said.

"I thought he had a good chance because he ran well in the Victoria Cup. He was stepping up to a mile, which I knew would suit, and he was crying out for firm ground. I knew I had a real good shot at it.

"In big mile handicaps it's difficult to make all, but this year there were very few front-runners. Nothing was making it so I got a reasonably easy lead. He's happy in front and has a big stride.

"Ian Balding always said if you get to the rail it makes it harder for those behind and gets some in trouble."

Martin Dwyer: made all on Zhui Feng
Martin Lynch (racingpost.com/photos)
The tactics paid off as the three market leaders were no-shows. Abe Lincoln was only 15th, El Vip 20th and Banksea 26th.

Blair House was having his first start since October last year having been gelding.

Trainer Charlie Appleby said: "If you'd told me this morning he was going to be second, I would have taken that.

"We always thought he would appreciate a bit of cut in the ground; he has more proven form with juice in the ground."

The 66-1 shot Tashweeq had missed the whole of last season and trainer John Gosden said: "The handicapper just needs to give him a bit of relief."

FIRST PUBLISHED 5:11PM, JUN 21 2017
When they gave me an uncontested lead, I was able to save enough petrol and go again. It was a good performance