Yorkhill throws it away as Respect pounces to nick a thriller

Yorkhill dramatically threw away the Ryanair Gold Cup – and what could end up being a crucial €40,000 in trainer Willie Mullins' title tussle – by jumping sharply left at most of the fences and handing the Grade 1 Fairyhouse prize to Road To Respect.

Yorkhill, sent off at 4-7, even threatened to duck out at the last, but while he was brilliantly guided over that obstacle by Ruby Walsh, he succumbed by a neck to the 7-2 shot.

Both horses had won at last month's Cheltenham Festival, when Yorkhill had landed the JLT Novices' Chase and Road To Respect the Brown Advisory & Merriebelle Stable Plate.

But this return to a right-handed track proved a disaster for Yorkhill, who provided all of the drama throughout the race. He pulled his way to the front after the fourth fence and leaped markedly to his left thereafter, producing his worst sideways manoeuvre at the last.

For Mullins, Yorkhill's wayward performance was something of a nightmare.

"That was very disappointing," he said. "We knew he might jump to the left, but we certainly weren't expecting him to do it to that extent.

"To be beaten only a neck after all the ground he lost tells you a lot about the horse – he is a huge talent. But what we can do to sort him out for going right-handed, I just don't know. It's back to the drawing board, that's for certain." 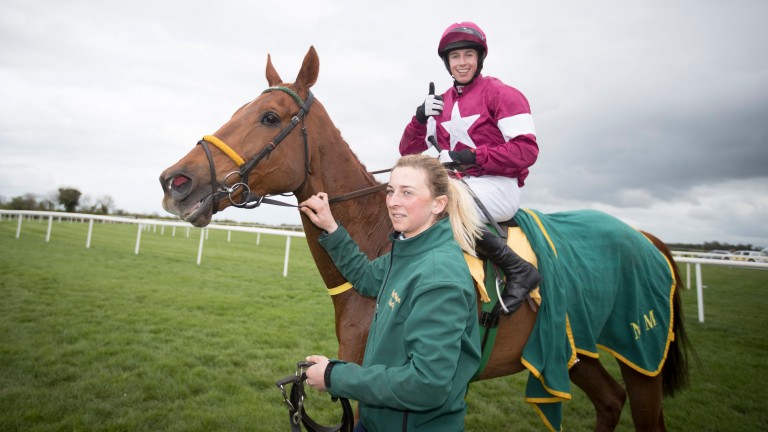 Thumbs-up: Bryan Cooper is all smiles after Road To Respect's Grade 1 victory at Fairyhouse
Patrick McCann

Noel Meade, who was training his third winner of the contest, said: "We dithered between running Road To Respect today or waiting for the Irish National tomorrow and it looks as if we made the right call.

"We knew Yorkhill might jump to the left. We hoped he would and he certainly did, and we've benefited from it. Yorkhill is obviously a very talented horse but all is fair in love and war!"

Meade added of the Gigginstown House Stud-owned winner: "He's only six and we think there is plenty of improvement to come. He'll probably appreciate longer distances too.

"That might be the end of his season, although I'll have to talk to Michael and Eddie [O'Leary] to see what they want to do regarding the possibility of him running at the Punchestown festival. He looked super today and he's one of those horses who seems to be better the less you do with him at home."

Road To Respect's jockey Bryan Cooper, like the owners, was enjoying a first success in the race.

He said: "I knew Yorkhill was jumping out to his left but I just had to concentrate on my fella. He did it well and keeps on improving. I was keen to take a lead if I could and it worked out well. He's a lovely horse and has given me two great days now."

Ball D'Arc was five lengths behind Yorkhill in third, with Baily Cloud half a length back in fourth.

Yorkhill remained 7-1 third favourite for the 2018 Timico Cheltenham Gold Cup, with Road To Respect trimmed into 25-1 (from 33), but unsurprisingly the runner-up's odds for the King George VI Chase drifted just like he had in the race and he can now be backed at 14-1 (from 10) for Kempton's Christmas highlight.