Watch: Contrail wins Japanese Derby on the bridle and earns 10-1 price for Arc 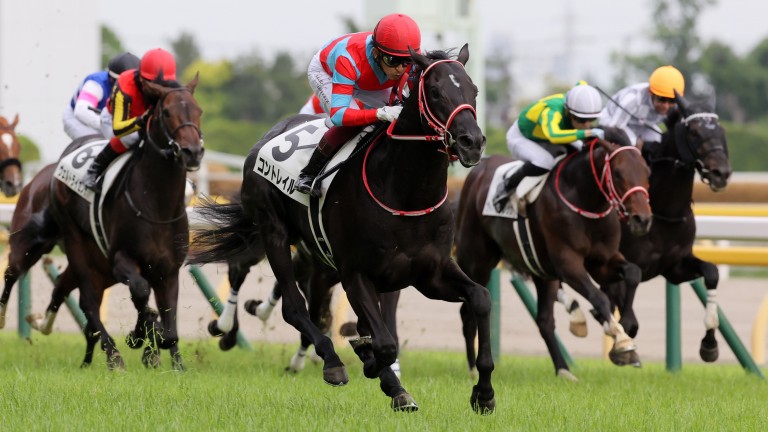 Contrail: extended his unbeaten advantage to five in the Tokyo Yushun (Japanese Derby)
JRA
1 of 1
By James Stevens UPDATED 11:24AM, MAY 31 2020

Contrail established his superstar status in Japan with a breathtaking win in the Tokyo Yushun (Japanese Derby), with that performance earning him quotes as short as 10-1 for the Arc.

Racing in midfield, he travelled with exuberance throughout and jockey Yuichi Fukunaga remained motionless as he begun to pass his rivals and into the lead.

Key challenger Salios made a late charge for home but he was no match for the mighty Contrail, who had extended his advantage to three lengths without breaking sweat.

The son of Deep Impact was a red-hot favourite following his impressive win the Japanese 2,000 Guineas last time and he is now just one leg away from becoming the eighth winner of the Triple Crown.

A win in the Kikuka Sho on October 25 would make him just the third horse to achieve the feat this century, following Orfevre in 2011 and Contrail's sire Deep Impact in 2005.

But the Yoshito Yahagi-trained Contrail's devastating performance has seen his price slashed for the Prix de l'Arc de Triomphe if connections choose to go to Longchamp on October 4. He is a general 10-1 chance to become the first Japanese-trained winner of the race, with his price twice the odds of favourite Enable. Japanese ace Almond Eye is a 6-1 chance.

Winning jockey Fukunaga, who enjoyed his second win in the Japanese Derby, said: "I was just focusing on finishing this race on a high note and although he still has room for improvement, he tends to lose his focus when he's leading. He still is able to win like he did today, so he's got great potential and there's a lot to look forward to with this colt."

The win means there could be two Japanese Triple Crown winners in 2020. Last Sunday, Daring Tact won the Yushun Himba (Japanese Oaks) and the final leg of the Fillies' Triple Crown is the Shuka Sho on October 18.

The success also continued Deep Impact's dominant record as a stallion in Japan. He has sired four of the last five winners of the Tokyo Yushun.

FIRST PUBLISHED 11:22AM, MAY 31 2020
I was just focusing on finishing this race on a high note and although he still has room for improvement