Thistlecrack denied by heroic final performance of Many Clouds 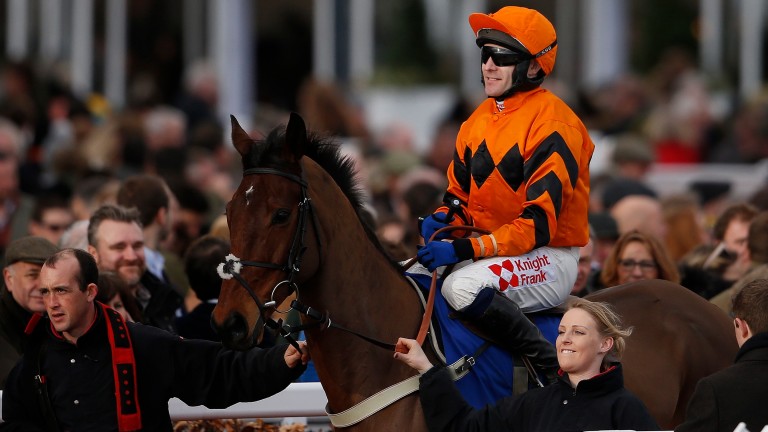 It was a result overshadowed by the sad death of the heroic Many Clouds, but Thistlecrack's perfect record over fences came to an end when his colours were lowered for the first time by the 2015 Grand National winner in an unforgettable duel at Cheltenham on Saturday.

The brilliant King George VI Chase winner and Timico Cheltenham Gold Cup favourite lost out by a head in a photo-finish with Many Clouds in the BetBright Trial Cotswold Chase, a festival prep that has become synonymous with upsets.

"It had to happen someday" was the reaction of Thistlecrack's trainer Colin Tizzard, but such had been the brilliance shown by the novice in four runs over fences that few expected that moment to arrive this side of the Cheltenham Festival.

The reaction from bookmakers was to ease the previously odds-on Thistlecrack, who had been as short as 8-11 before the Cotswold, to a top-priced 5-2 with Betfair Sportsbook as the next five in the Gold Cup market were all shortened.

Thistlecrack displayed less of the exuberance he had shown in wins at Kempton, Newbury, Cheltenham and Chepstow as he produced the least effective performance of his short chasing career.

With last year's Cotswold winner Smad Place setting out to make it a searching test from the front and Many Clouds keeping him company, Thistlecrack's jumping was peppered with minor errors.

He nodded on landing over the ninth fence, got in close to the fourth last and was scruffy at the next as Many Clouds passed Smad Place to launch his bid for victory.

But Thistlecrack appeared in charge as he joined battle with two to jump and then moved ahead of his rival. Many Clouds, however, was brave to the last and fought back on the run-in to snatch the spoils in an absolute thriller, only to go down strides past the line.

A magnanimous Tizzard said: "It had to happen someday and in the end he was outstayed. We haven’t been used to this with Thistlecrack and you almost come to expect it [winning]. But he’s still run a beautiful race and that might be some of the best form we see this season.

"Many Clouds is a good horse and he’s beaten us. I’m not making any excuses. He went to the last like he was going slightly the best and he got outstayed. We’re all going to get beat someday.”

Thistlecrack and Tom Scudamore: "I don’t think we’ve lost much in defeat," said the jockey
Alan Crowhurst
Thistlecrack suffered his first defeat in ten starts and joined one of his Gold Cup rivals, Djakadam, among the illustrious horses to have been beaten favourite in the Cotswold, which has not had a successful market leader since 1999.

His jockey Tom Scudamore said: “It was a great performance by Many Clouds and I don’t think we’ve lost much in defeat. He’s jumped very well and we were beaten by a better horse on the day.”

The death of Many Clouds was a tragic blow at the end of such a magnificent duel.

Tizzard said: "Poor old Many Clouds. It’s as sad as can be. He’s a fantastic, lovely horse and beat us on the day.

"We’re not making any excuses whatsoever. On winter ground here we were beaten by a better horse. No question about that. They went to battle and it’s a tragic end to the race and everyone here will feel the same.”

FIRST PUBLISHED 5:14PM, JAN 28 2017
On winter ground here we were beaten by a better horse, no question about that. They went to battle and it’s a tragic end to the race