Talk Of The Tracks NO AMERICAN DREAM 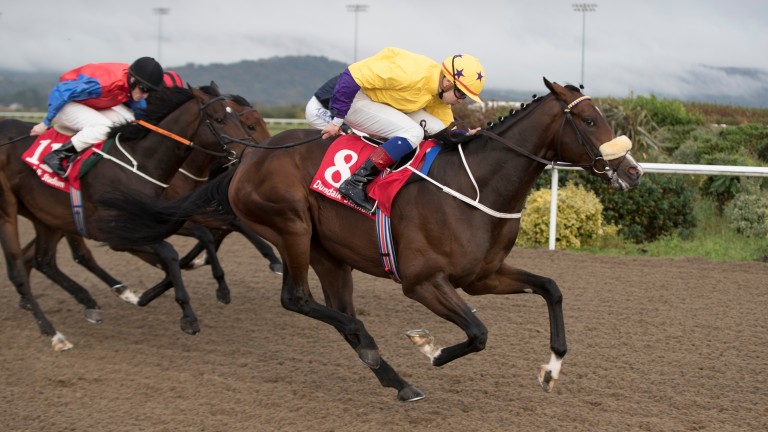 Playa Del Puente: off to Hong Kong after his Listed win at Dundalk
Patrick McCann (racingpost.com/photos)
1 of 1
By Bruce Jackson and Justin O'Hanlon UPDATED 9:20PM, MAR 6 2019

Jahbath extinguished the Kentucky Derby dreams of his rivals as he put them in their place as an odds-on favourite should do in the feature race at Kempton on Wednesday evening.

Although the mile conditions race carried the 'Road To The Kentucky Derby' title, Sheikh Hamdan Al Maktoum's colt was prepping for a tilt at the UAE Derby at Meydan.

The owner's retained rider Jim Crowley made the trip back to Britain from Dubai to take the ride on the William Haggas-trained colt, who won by two lengths from 20-1 outsider Getchagetchagetcha and Target Zone.

Crowley easily covered the pace set by Amplify as Jahbath broke alertly and eased effortlessly into the lead off the home bend.

Hard as the pursuers tried, they could make no inroads as Crowley only had to push out Jahbath to maintain his clear advantage.

Things did not go so smoothly for the favourite in the other Kentucky Derby trial that was the rearranged BetVitor Patton Stakes at Dundalk.

The Listed mile had been won a year ago by the Aidan O'Brien-trained Mendelssohn but Western Australia, the 6-4 favourite representing the same team, was readily held by Playa Del Puente, who is another who will be heading east rather than west for his next assignment.

Winning trainer Mick Halford said: "He is a really smart horse. He took a while to settle but he's on the improve the whole time. We sold him to the Hong Kong people and we were grateful that they left him with us.

"He's going to go to Hong Kong now. That was always the plan for him to go out there in May. It was great to have him and he has a real future ahead of him. I would say they want him for the Hong Kong Derby next year."

FIRST PUBLISHED 7:52PM, MAR 6 2019
I would say they want him for the Hong Kong Derby next year