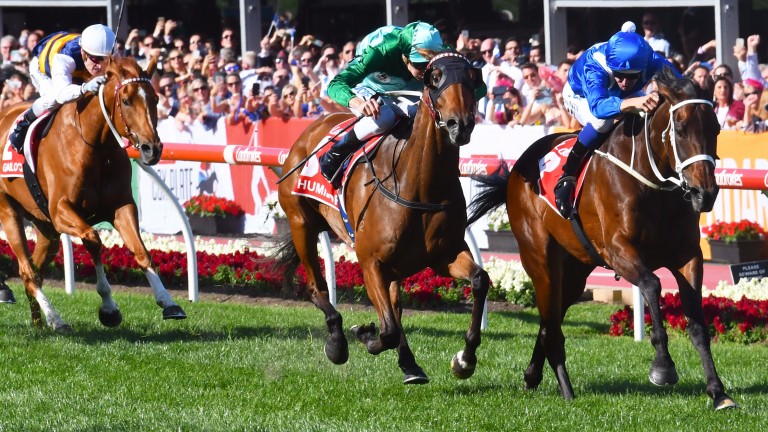 Winx holds off the challenge of Humidor in the Cox Plate at Moonee Valley on Saturday
Vince Caligiuri (Getty Images)
1 of 1
By David Jennings UPDATED 2:32PM, OCT 28 2017

The world was watching, the sellout crowd was worshipping and history was waiting – so it is lucky Winx has a will to win like no other and was able to withstand the late surge of Humidor to claim her third Ladbrokes Cox Plate.

The stakes could not have been higher and Winx cashed in her chips in a course-record time despite having only half a length to spare. It was more workmanlike than wonderful but the style of the success did not matter. This game is about winning and the wondermare has perfected the art.

Winx has now won 22 on the trot, is Australia's highest-earner, has matched Black Caviar's record of 15 Group 1 wins, has followed in the hallowed hoofprints of Kingston Town – who also completed a Cox Plate hat-trick – and has broken her own course record at Moonee Valley. Now that's what you call a good day at the office.

"I'm lost for words," was winning jockey Hugh Bowman's immediate reaction to the historic moment, but he soon found the right ones to sum up the superstar.

"She's a freakish individual and supreme athlete," he said. "She's recognised throughout the world as an exceptional horse. She's a dream to deal with; she's the ultimate professional, and she's not finished yet."

The absence of the Jane Chapple-Hyam-trained Kaspersky, who would have been a first Cox Plate ride for Michelle Payne, due to swelling of his near foreleg meant the field was reduced to eight. Gailo Chop adopted his customary frontrunning role and set a brisk tempo, helping Winx to relax in midfield. 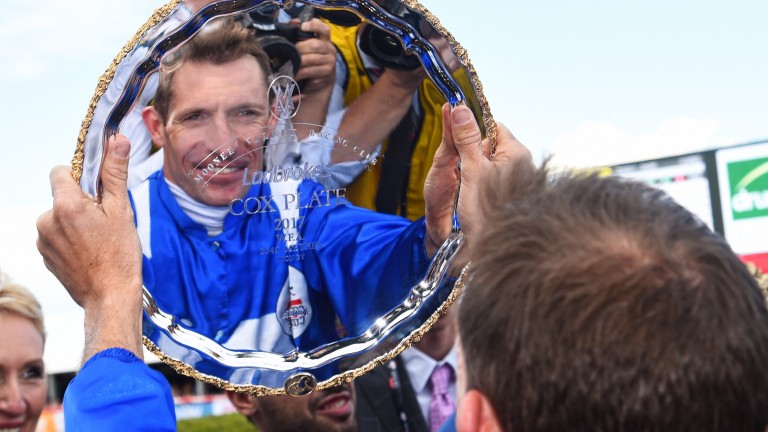 Hugh Bowman poses with his trophy after riding Winx to victory in the Cox Plate
Vince Caligiuri (Getty Images)
Just had been the case in her two previous Cox Plate wins, Bowman began to move on the outer with three furlongs of the mile and a quarter contest left to run and gobbled up Gailo Chop on the home turn, at which point course commentator Matt Hill roared, "the Valley is rocking and the world is knocking".

But there was one more twist in the tale as Blake Shinn went in pursuit on Humidor. Would Winx wobble? Of course she wouldn't. She is made of steel and gave the world the result they wanted, holding on gamely, and there were a further four and a quarter lengths back to Godolphin's Folkswood in third.

"We're in the presence of greatness," beamed Bowman. "It means so much to so many people. She'll go down in history as one of the greatest horses to have ever graced the Australian turf.

"The expectation was there that she'd do the inevitable. I'm so proud of her and so proud of what she's done for our sport." 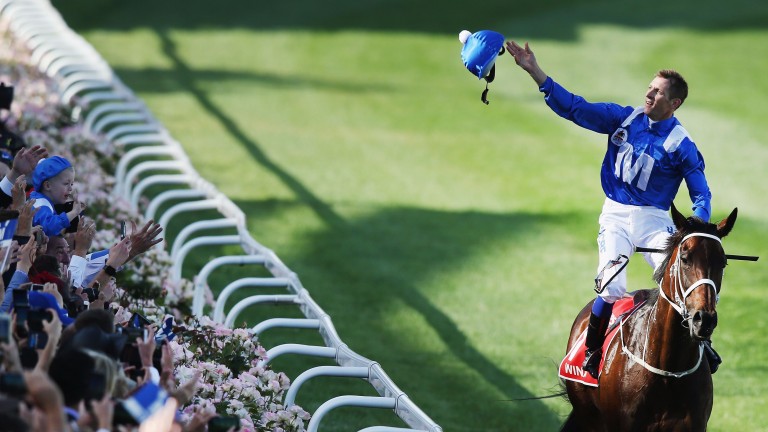 Winx: will be the star turn at Randwick
Michael Dodge (Getty Images)
Trainer Chris Waller fought back tears as he tried to put the magnitude of the occasion into words.

"It's been a pretty intense four months trying to get her in the best possible shape for all of her fans today," he said. "I'm just as proud of my team as I am of Winx. They've all done such a wonderful job with her. I'm blessed to be a part of it."

Waller stressed that no decision on a possible trip to Royal Ascot, or anywhere else, will be made until the spring.

He said: "She'll go only if she's at her very best and I'm happy with her. We won't make a decision until at least March."

Shinn, who came close to spoiling one of the biggest parties in the history of Australia racing, heaped praise on Winx, saying: "I never really thought I was going to get her but we just kept on trying and trying. She's a champion and she pulled out all the stops."

The supreme racehorse who is Australia's Wonder Woman