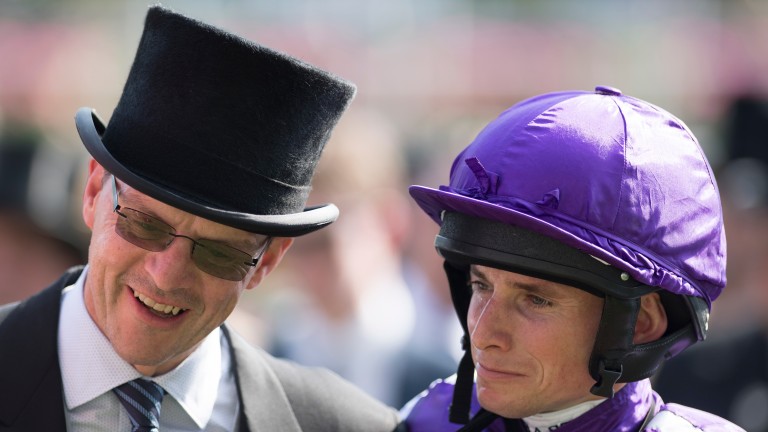 Aidan O'Brien was crowned top trainer at Royal Ascot five times in the last eight years, while Ryan Moore has been the meeting's top jockey on all but one occasion in that time, and the pair are odds on for their respective honours this week, with O'Brien a best-priced 1-2 in the leading trainers market and Moore 4-5 to be top jockey.

The most successful current jockey at the royal meeting, Frankie Dettori, is the only other rider at a single-figure price, with 11-4 the best available, while James Doyle (11-1), William Buick (12-1) and Christophe Soumillon (16-1) are the others whose chance is rated better than 25-1 by the bookmakers.

Punters put off by Moore's prohibitive price can dabble in William Hill's total winners market, for which they make six the 5-2 favourite. Five – and three or four combined – are 11-4 shots, with seven or more available at 4-1, and two or fewer the 6-1 outsider.

Hills' spokesman Rupert Adams said: "Royal Ascot is a key week for us and the meeting can make or break our racing book. Early turnover is at a record high and we need Lady Aurelia and Rhododendron to miss out on day one."

The week will also usher in a notable concession for punters, with Betfair Sportsbook becoming the latest to guarantee a loss up to a certain limit.

In this case the amount is £500 on all UK and Irish Class 1 and 2 races, including Group, Listed and top handicap races, starting at 10am on day one of Royal Ascot.

Kevin Harrington of Betfair said: "Royal Ascot has some of the most competitive racing on the planet, so we thought it was an ideal time to launch our new online £500 guarantee, which will in future apply to all Class 1 and 2 races."

FIRST PUBLISHED 6:00PM, JUN 18 2018
Early turnover is at a record high and we need Lady Aurelia and Rhododendron to miss out on day one

Aidan O'Brien is on course for one of his best years - and you'd hardly know it Mickaelle Michel taking inspiration from Hollie Doyle ahead of Shergar Cup New option for Palace Pier as Qipco British Champions Day entries are revealed Fellowes warns controversial vet checks are deterring Melbourne Cup raiders Mother Earth continues O'Brien's French summer of love with Rothschild success Ryan Moore: 'I try not to offend anyone but for me it's always about the horses'