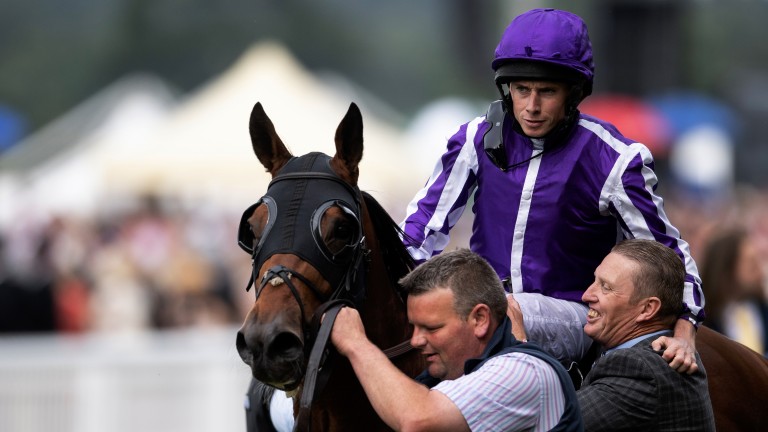 Ears pricked: Merchant Navy is led back in with Pat Keating and his groom David Hickery after his Diamond Jubilee victory
Edward Whitaker / racingpost.com/photos
1 of 1
By Graham Dench UPDATED 10:19AM, JUN 24 2018

Aidan O'Brien feared Merchant Navy faced an impossible task at the weights as a southern hemisphere-bred three-year-old against top older sprinters and he was resigned to him being on the plane back to Australia before he had another opportunity with him.

Now, following a nail-biting short-head defeat of French raider City Light that left commentator Simon Holt unsure of the result and the cameraman focusing on the runner-up, he is praying he can hang on to the top-class son of Fastnet Rock for another three weeks and therefore bid to complete the identical double to his previous winner of the race, Starspangledbanner, another Australian three-year-old who took the sprinting scene by storm in 2010.

Merchant Navy is currently booked to fly back to Australia on the day of the Darley July Cup, but the breeding season, for which he is already syndicated and has a full book of mares, does not start until September and 'the lads' will surely find a way to delay his trip by a week or two.

Merchant Navy had survived a bump from pace-setting third Bound For Nowhere inside the final furlong to lead close home and avoid the stable suffering a first Royal Ascot without a Group 1 win since 2005.

But the race had been turned on its head from the outset when favourite Harry Angel got a leg stuck in the stalls and started slowly. He could never feature in the race and finished seventh.

Winning trainer O'Brien spelled out some of his worries going into the race. He said: "We thought it was an impossible task for Merchant Navy as he was meeting the other horse from Australia [Redkirk Warrior] 12lb wrong compared to when they met there.

"He's only a three-year-old [bred to southern hemisphere time] but being treated like a four-year-old.

"It was a big worry and when he ran at the Curragh he didn't know if he was going into the winter or coming into the summer. He had a lot of readjusting to do, and you have to leave it to nature, but he's obviously got a great constitution as well as a great mind. He sleeps and eats and is very straightforward."

He added: "He's a lovely big horse. He's relaxed and genuine and has a good mind. He's no problem in any way. He's a joy to have anything to do with.

"We don't do a lot with him at home, and [besides his run at the Curragh] he's only done five half-speeds. He'd have been unlucky not to have won as Ryan [Moore] said he got a bump. He's a big horse, and that's why it took him a little while to rebalance."

With an eye to the future he said: "I can't tell you how happy we are. He improved a lot from the Curragh to here, and we thought there was plenty more to come, but he's booked to go back to Australia after this so I don't know what's going to happen. Wouldn't it be great to have him for the July Cup too."

Merchant Navy was a fourth Ballydoyle winner of the week, following Hunting Horn, Kew Gardens and Magic Wand, but O'Brien feels that some of his runners have been just short of their absolute peak after a tricky spring.

He said: "It's been a great week and our horses ran very well, but some of them were maybe three weeks off as that little edge wasn't there. We've had some winners and we've had some losers, but it's a privilege to be here. We're delighted."

Tom Magnier, who runs Coolmore's Australian operation, is a big fan of Merchant Navy and can't wait to have him back for his second career.

He said: "He won at Flemington [Group 1 Coolmore Stud Stakes] and was very impressive that day. We acquired the horse after that.

"He'll be covering mares in September and he's got a full book, which is very exciting. Breeders in Australia are very keen on him. Aidan has had the formula right in the past with Starspangledbanner, and Merchant Navy is already syndicated."

As for Redkirk Warrior, he started 4-1 joint-second favourite with the winner behind 5-2 market leader Harry Angel but was unable to make a splash, finishing tenth of the 12 runners.

FIRST PUBLISHED 4:38PM, JUN 23 2018
He's booked to go back to Australia after this but the lads will see. Wouldn't it be great to have him for the July Cup too? We'll do our best