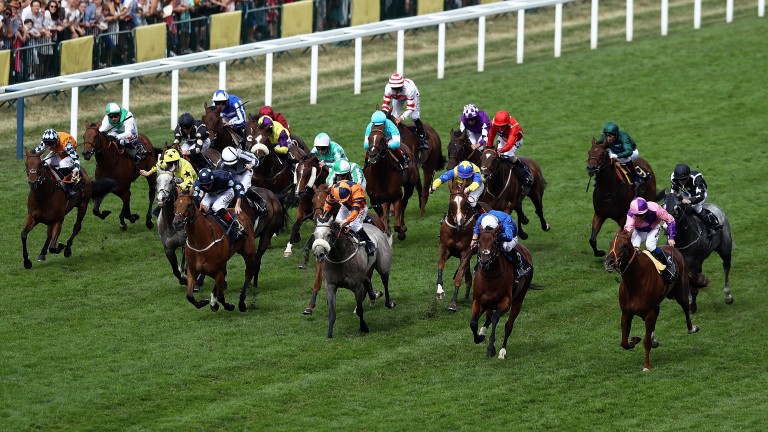 For 20 years Brian Meehan has felt aggrieved every time the Wokingham crossed his mind. No longer.

“I was beaten a short head in this many years ago with Dancethenightaway,” said the trainer as he celebrated the success of Bacchus to right the wrong.

“I thought I was robbed that day. She was on the stands’ side as the winner came down the middle. But this one was bang up the middle. Jim [Crowley] gave him a copybook ride. I couldn’t be happier.”

Meehan’s joy at his seventh Royal Ascot winner and first in six years was shared by bookmakers, who escaped a huge payout when his 33-1 chance wore down the heavily backed favourite Dreamfield, supported into 2-1 in the 28-runner handicap, in the final 50 yards.

The unbeaten Dreamfield had won all three of his previous starts and looked like giving John Gosden his fifth winner of the meeting when he took the lead under James Doyle after the two-furlong pole.

But the four-year-old drifted left throughout the final furlong, forfeiting crucial ground, as Bacchus, who had been off since finishing fourth over course and distance in October, moved stealthily behind before pouncing.

"Fair play to Brian Meehan, it was a fine training performance," said Crowley.

"The race panned out perfectly for me. The one thing Brian said was he wouldn't want to be in front too soon, and when Dreamfield went clear I rode my horse to beat him – it was perfect.”

On his week, he added: “I’ve had three seconds so it could have been five winners, but I’m very grateful to have the two.”

The win was only an eighth winner of the year for Meehan. But now things look brighter.

He said: “It’s been a bit tough. The spring didn’t go well and I decided not to run this horse and go straight to the Wokingham.

“When you have a nice horse like this you can afford to be adventurous. He’s a lovely horse with a huge future. He's a stunning horse and one of the yard favourites. I thought Jim was masterful on him.

“He’s tailor-made for this sort of thing and the plan is to go for the Ayr Gold Cup next. But we’ll have to see what the handicapper does.”

Crowley received a four-day suspension for using his whip above the permitted level inside and in the incorrect place, while Doyle was suspended for two days for using his whip without giving Dreamfield time to respond inside the final furlong.

FIRST PUBLISHED 5:12PM, JUN 23 2018
He’s a lovely horse with a huge future. I thought Jim was masterful on him

Armory tees up Arlington Million tilt by taking on Mohaafeth in Group 2 'It's too easy to go into every battle. You won't win the Arc that way' 'He's a really exciting horse' - Angus Gold on Shadwell's latest star Johnny Drama lands John Smith's Cup to see Josh Bryan bring up century in style