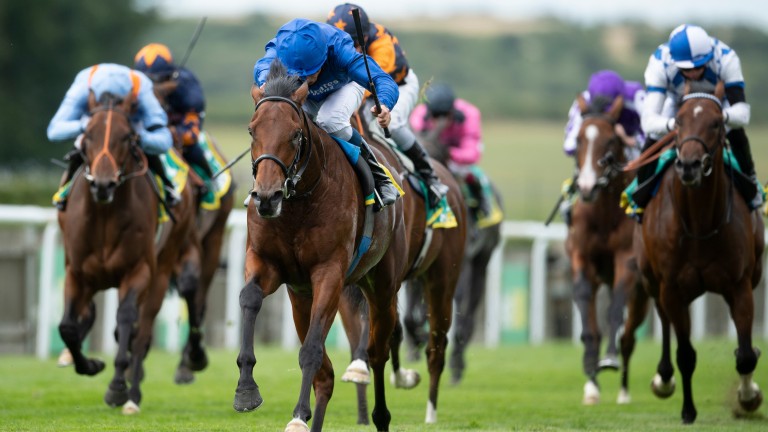 Master Of The Seas storms to victory in the Superlative Stakes at Newmarket
Edward Whitaker (racingpost.com/photos)
1 of 1
By Andrew Dietz UPDATED 6:02PM, JUL 11 2020

Master Of The Seas earned quotes for next year's Qipco 2,000 Guineas after emulating his sire Dubawi by winning the Group 2 bet365 Superlative Stakes at Newmarket.

The Godolphin-owned juvenile was a dominant winner of the 7f contest for in-form duo Charlie Appleby and William Buick.

Many bookmakers were impressed with his Guineas odds as low as 8-1, although Paddy Power were more reserved with their first-show 25-1. That price did not last long as the firm soon went 16-1.

Sent off at 4-1 having won on his debut on the Rowley Mile last month, Master Of The Seas was on his own down the centre of the track but he galloped on relentlessly to leave runner-up Devious Company in his wake, with three lengths the margin at the line.

Seventh Kingdom, who was slowly away and under pressure a long way out, finished strongly in third up the stands' rail.

Appleby said: "That was pleasing. He's very straightforward and has a lovely temperament and is one of the horses who has been under the radar slightly.

"We'll give him a little bit of a break as Goodwood would come a bit quick, so the likely route is we will head to the National Stakes [at the Curragh].

"William said he wasn't for stopping. It's a bit early to be getting too excited where we might be next year, but he has the right attitude and physique to see him go beyond a mile with a bit of luck."

Master Of The Seas would need to defy the trends next season as the Superlative has failed to produce the Guineas winner in its 34-year history.

Motakhayyel on top in Bunbury Cup

Motakhayyel held off Sir Busker in the battle of the Royal Ascot winners in the bet365 Bunbury Cup at Newmarket.

Jim Crowley has shown a canny knack of selecting the right Hamdan Al Maktoum runner as that was the case again on the Richard Hannon-trained winner, with favourite Mutamaasik finishing unplaced.

"I probably went for a home a bit too soon but I know he stays a mile very well," said the jockey. "He's a solid horse, whose won two nice handicaps, and I'd like to think he can make the step up to Group races at some stage."

William Haggas continued his domination of the fillies' handicap on Ascot's Summer Mile card after Manaabit gave the trainer his third straight win in the race.

The improving three-year-old, who won at Beverley on her turf debut last month, travelled powerfully just off the pace in the mile contest before pulling clear of her rivals to score by a length at 17-2.

She followed the Haggas-trained Ummalnar and Beshaayir on to the race's honour roll, while Roxy Star also scored for the trainer in 2015. 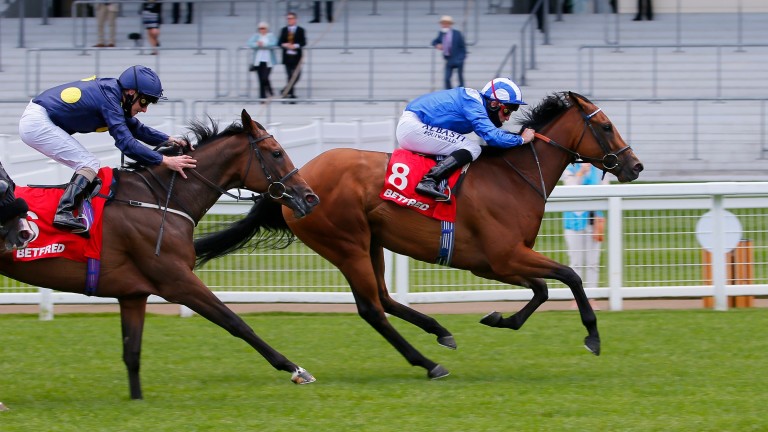 Winning jockey Dane O'Neill said: "She's very straightforward. She got a flyer from the gate and did it as she liked. She's kept improving, when I spoke to William this morning he said he wasn't sure whether she'd hit her ceiling but today she showed a really good attitude and that she is progressive."

There were shades of Royal Ascot as Manaabit carried the colours of Hamdan Al Maktoum, who enjoyed a superb royal meeting with six victories over the five days.

In 2018, Beshaayir went on to strike at Listed level before winning the Group 2 Lanwades Stud Stakes at the Curragh the following season.

It's still her favourite day! There's no Shergar Cup but Turner dazzles again 'Every year it felt like we'd have a top-class horse': 40 years of Sheikh Hamdan 'He's capable of winning lots of Group 1s' - Mohaather given French option Tom Marquand: 'I've had the jockeys' title on my mind since I was five' 'Treat him like a good horse' - Burrows eyeing Group races for exciting juvenile Why handicaps and Saturday schedule need attention after a unique week