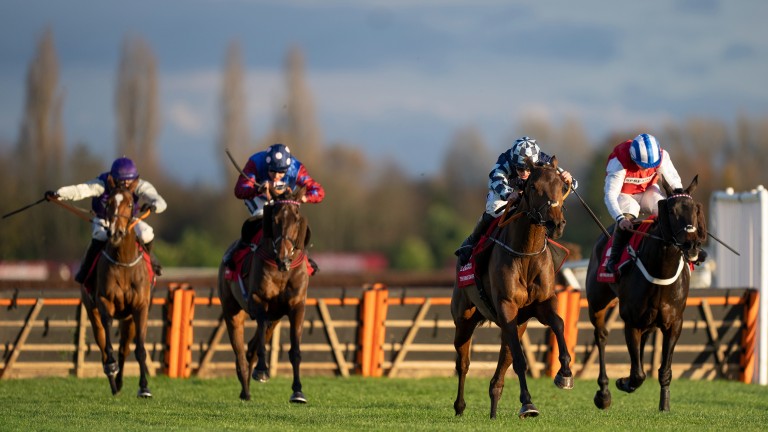 Olly Murphy suggested no horse has tested him as much as Thomas Darby, whose four previous successes probably do not begin to tell the whole tale of his talent, which he demonstrated in style with victory in the Ladbrokes Long Distance Hurdle.

It was probably not the easiest watch in the world for Murphy, but resulted in one of his leading lights being cut to 16-1 (from 40) by Paddy Power for the Stayers' Hurdle at the Cheltenham Festival.

In his fifth season training, Murphy has come a long way in a short time and lives and breathes the sport, so a signature success meant plenty, even if he did admit to his faith in Grahame and Diana Whateley's classy eight-year-old being challenged when the 7-1 shot lost his position after a mistake four out. 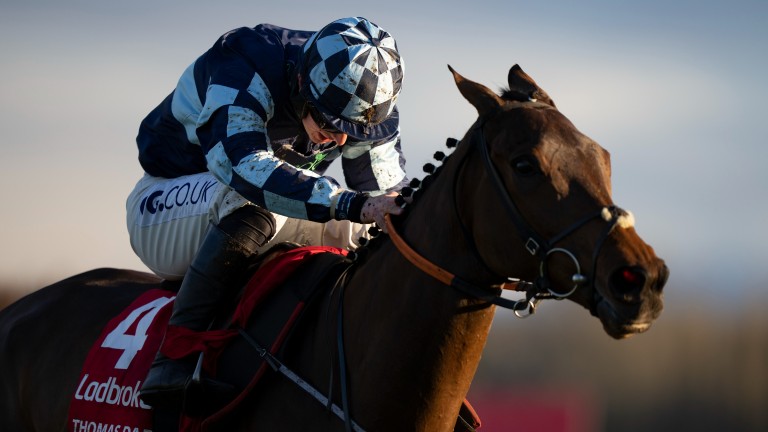 Thomas Darby: had looked in trouble turning for home before powering to victory
Edward Whitaker (racingpost.com/photos)

That, to Murphy's relief, was a fleeting error and Thomas Darby picked up powerfully under Sean Bowen to overcome On The Blind Side, with Paisley Park – the 2019 Stayers' Hurdle hero – far from disgraced in third.

Murphy said: "I'm sick and tired of saying this lad will win a good race and, turning in, I thought, 'He's lost all my trust'. Two down he's come back hard on the bridle and I've always said he's a good horse.

"Saying he's let me down is probably wrong, but I stuck a tongue-tie on him three mornings ago and he saw his race out really strong today. He made a mistake down the back and Sean let him get back into the race and he got there plenty soon enough."

The Howden Long Walk Hurdle at Ascot on December 18 is likely to be next for Thomas Darby and Murphy added: "It wasn't a terribly hard race and Sean never picked his stick up from the second-last to the line. Grahame and Diana are massive supporters of mine and to have a winner on a big stage for them is great.

"I don't see any reason he can't be a bona fide Stayers' Hurdle horse. The Irish probably have a stronger hand, but there's not much else this side of the water – but I just want to see him back this up. He'd run well at Aintree in the spring and then disappointed at Wetherby, but he's been good today."

Grand was the word Emma Lavelle used to describe the effort of Paisley Park, although she finished her post-race debrief by declaring she "just wanted to win".

Murphy knows that feeling and was, understandably, revelling in it.

Will a return to Newbury spark a revival for former winner Django Django? Our man advised 4-1 and 7-2 winners in the last week and is back with four bets Newbury Placepot tips: Graeme Rodway gave a winning perm at Chepstow on Monday 'I was able to dictate' - Eclair Surf routs Classic Chase field for Bellamy 'He'll sneak in off a nice weight' - Betfair plan for Constitution Hill victim Punters look back in anger as two of three Oasis-themed runners beaten