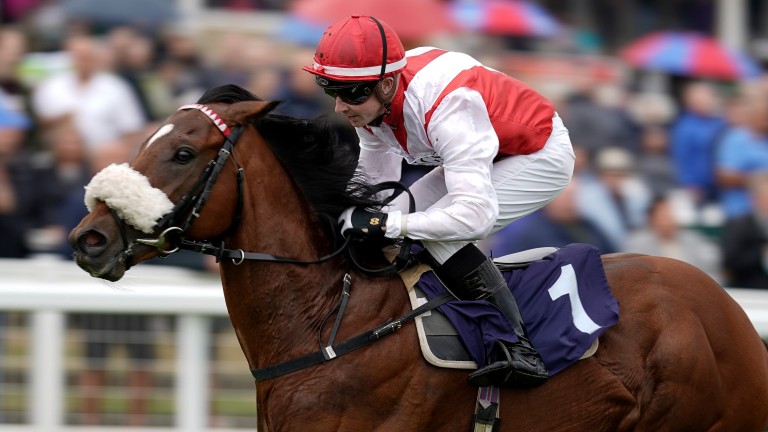 My Little Tip completed an extraordinary hat-trick in just eight days after recovering from a poor start to land the 7f nursery at Catterick.

Since being purchased in April for £11,000, My Little Tip has taken his enthusiastic owners, the ten-strong MLT Club syndicate, all over Britain, with victories at Salisbury last Friday and Yarmouth on Tuesday before here in North Yorkshire.

The hat-trick looked in doubt when the George Boughey-trained juvenile was slow out the gate. But Saffie Osborne, standing in for Aled Beech who was at his sister's wedding, did not panic and they eventually got up to beat Neptune Legend three-quarters of a length.

A spokesperson for the syndicate said: "It's been brilliant, it's a stuff of dreams. We got him for £11,000 at Doncaster breeze-ups and it's looking a bit of a shrewd purchase. The credit has to go to Kings Bloodstock who found him, and we've got to thank George, Aled and Saffie.

"There's about ten of us who have got a share, we're all friends so it's been a fantastic few days. Some of us have been all over the country going racing, which has been great and we'll all be having a few beers tonight."

The winner was striking off a mark of 87, and connections will eye bigger targets after he has a well-earned rest.

Old Flame registered an easy win in the 7f novice stakes to give the famous Juddmonte silks a first success at this track since 2018.

The Ralph Beckett-trained three-year-old kicked clear in the straight to beat the once-raced winner Lightening Company by eight and a half lengths.

FIRST PUBLISHED 6:03PM, SEP 18 2021
Some of us have been all over the country going racing, which has been great and we'll all be having a few beers tonight