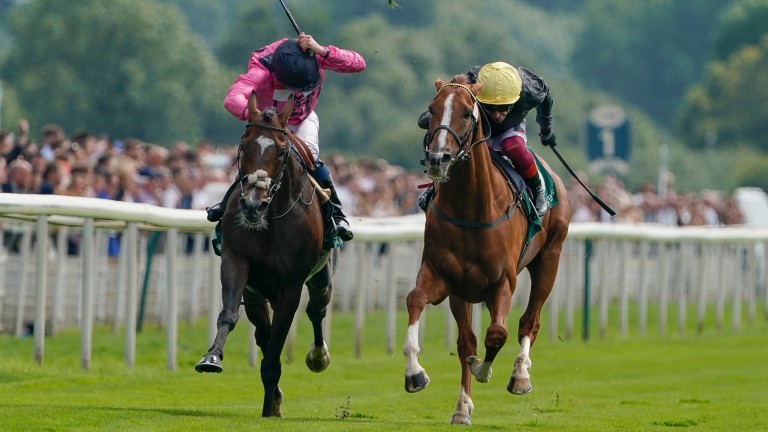 Stradivarius (right) beats Spanish Mission in a ding-dong finish to the Lonsdale Cup
Alan Crowhurst
1 of 1
By David Carr UPDATED 9:53AM, AUG 21 2021

Mishriff and Snowfall may have drawn applause with runaway wins earlier in the week but Stradivarius brought the house down as he scrambled home by a head. That's what happens when you are a star.

As the roaring Cheltenham hordes showed when Desert Orchid got up in the 1989 Gold Cup, there is nothing a crowd likes more than a legend of the game battling to overcome adversity. And Stradivarius is a bona fide legend.

Fighting back to see off the plucky Spanish Mission in a titanic Weatherbys Hamilton Lonsdale Cup gave him the 16th Group race success of his astonishing career and took his earnings past £3 million.

Racing for the first time since unable to land a blow from well off the pace in the Gold Cup at Royal Ascot, Stradivarius was headed at least twice by the runner-up who was matched at as low of 1.07 on Betfair – by folk who probably not did not join in the huge cheer that went up on course when the result of the photo finish was announced.

An emotional Frankie Dettori blew kisses to those who rushed to get a glimpse of Stradivarius as he returned to the winner's enclosure on a track where he now has a perfect five from five record.

Recounting the battle with William Buick before securing his 13th victory on the three-time Gold Cup winner, Dettori said: "He passed me once, then I passed him back, then he passed me and then on the line my horse went: 'Boom, I won!' 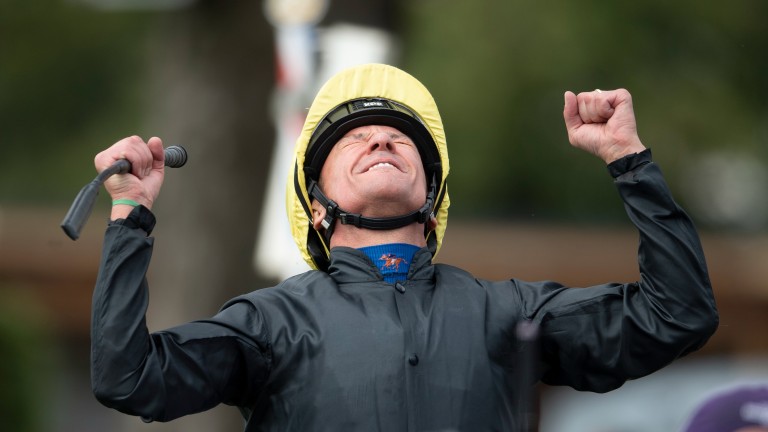 "I really think he knew where the line was. When I crossed the line there was a five-second delay and then an explosion from the crowd. I love the horse so much, he's seven and not getting any younger. The reception he got – he's loved by everyone. All the people came to see him and listen to the noise!"

Stradivarius was once likened to Muhammad Ali in the way he floated like a butterfly and stung like a bee, but trainer John Gosden said: "He's a little more rope-a-dope now. Spanish Mission put it up to him. It was a proper race for everyone to watch.

Those wanting to be present for Stradivarius' next appearance need to wait on a decision about running plans.

"The Doncaster Cup is a possibility and there is Champions Day but last year it was heavy and all the good horses got beaten," Gosden said.

However, retirement may still be some way off as the trainer said: "The horse will tell us, it's not our decision. As long as he's enjoying his training and racing and he's very enthusiastic, which he is, we keep racing. The moment that seems to be fading that's when we stop.

The Melbourne Cup beckons for Spanish Mission. Trainer Andrew Balding's wife Anna Lisa admitted: "When we went ahead I thought we'd got him. But we didn't.

"Someone said to have a good race you need two good horses and everywhere bar the line he had it. We'll stick to Plan A and Australia here we come, let's hope he does his stuff out there."

Ultimate professional Snowfall turns on the charm in Knavesmire procession

Members' Club: Get your tickets booked for Paris – Snowfall is headlining a 100th Arc to savour

Expert jury: 'colts will ask more of Snowfall in the Arc – she doesn't appeal'

FIRST PUBLISHED 2:34PM, AUG 20 2021
The reception he got – he's loved by everyone. All the people came to see him and listen to the noise!