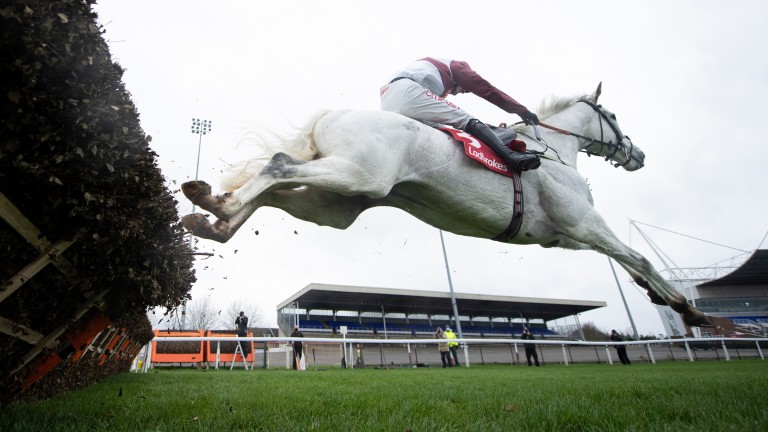 The Christmas Hurdle was supposed to be little more than a public gallop for the reigning queen of the two-mile hurdling division. Instead it was finally a glorious moment in the spotlight for one of the most admirable horses in training.

Epatante may have been sent off the 1-5 favourite, but it was Silver Streak who stole the show. The Evan Williams-trained seven-year-old has long been a favourite of racing fans as much for his eyecatching near-white coat as the woodpecker-like regularity with which he has banged his head against the door in Grade 1s. Not today.

In truth Epatante was well below herself. Last year she put five lengths into Silver Streak without Barry Geraghty having to so much as pick up his stick. This time she ran as flat as when beaten in the Mares' Novices' Hurdle at the 2019 festival.

Her rider Aidan Coleman said: "I'm not really sure what went wrong but the winner deserved to win. Just from turning in that usual burst of speed she usually has wasn't there today for some reason. But she'll be back." Asked if the mistake at the last in the back straight cost her he added: "No, not at all."

'It means an awful lot to us'

And Coleman was right, the winner certainly deserved to win. Silver Streak has been nothing if not a gallant yardstick at this level and delighted his trainer Evan Williams.

"There are lots of horses who you hear people say deserve it, but the reality is it's a tough old game but that lad today is so genuine and because he's so tough he genuinely did deserve it," he said.

"I've been hoping he'd be good enough one day as I've been telling everybody, but to land it like he did does mean an awful lot to us. I don't believe in bad luck, he's been beaten fair and square, but he's tough, he's genuine and I did think the ground is a huge thing – I can't emphasise that enough."

So often played late, a change of tactics made a huge difference as Silver Streak led from start to finish.

Williams said: "I was racking my brains and I said to Adam on Christmas Eve 'I want you to make the running in the Christmas Hurdle'. I didn't want to be second or third in the Christmas Hurdle, that means nothing to me. I had no ambition for that and I wanted to try and win one, and the only way I could see that was by going a good early gallop. The jockey has played a blinder."

FIRST PUBLISHED 6:39PM, DEC 26 2020
I didn't want to be second or third in the Christmas Hurdle, that means nothing to me. I had no ambition for that and I wanted to try and win one

'Jamie's been through a lot, which is why Goshen at Wincanton was so emotional' Brewin'upastorm readily accounts for McFabulous in Grade 2 at Fontwell Max McNeill wanted a sexy two-miler - in Tritonic he's found an absolute cracker James Bowen pulls off extraordinary feat after riding a winner with one rein 'You wouldn't be complaining with the runners we have for the festival' Ditcheat double? Big support for Paul Nicholls' two Grade 2 hopefuls