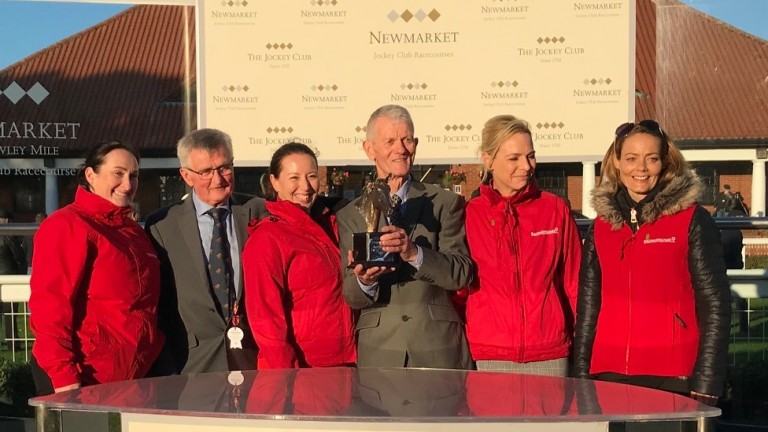 Dave Goodwin receives his lifetime in racing award on behalf of himself and Jean Bucknell
1 of 1
By David Milnes 7:19PM, OCT 20 2021

The final race on what was formerly the all two-year-old card was run as the Jean Bucknell A Lifetime In Racing Nursery Handicap, which was dedicated to the late Newmarket gallops stalwart who died in 2019.

Bucknell ran her own tour company around the Newmarket Heath many years ago and was later a familiar figure at the National Horse Racing Museum in the town, she also has a tree planted in her memory on the gallops close to the Al Bahathri Polytrack.

Always a talented work watcher, Bucknell is survived by her partner Dave Goodwin, who was was at the centre of a presentation after the race won by the Louis Steward-ridden Lawful Command. 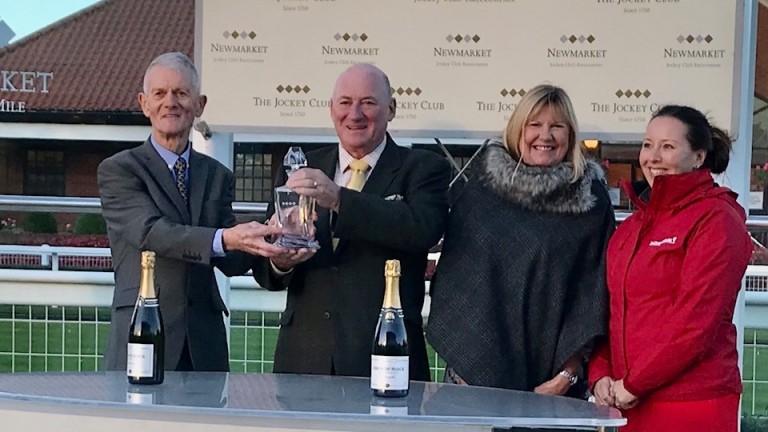 Goodwin has looked after not one, but two Derby winners – Slip Anchor and Commander in Chief in his time with Sir Henry Cecil – and recently came out of retirement to ride out for Chris Dwyer.

He said: "It's great to honour Jean in this way. The race was originally supposed to honour me but I didn't want to leave Jean out and in the end there was only space enough for one name in the race title.

"In the end I'd rather me not be in it than Jean, who is sorely missed and many of her friends were here today."

The first division of the 7f fillies novice was filled with two eventful incidents, beginning when favourite Social Contact did not take kindly to contact with the stalls and had to be withdrawn.

There was further drama when the eventual result was reversed by the stewards after first past the post Silver Kitten had carried initial runner-up Canterbury Bell across the course. 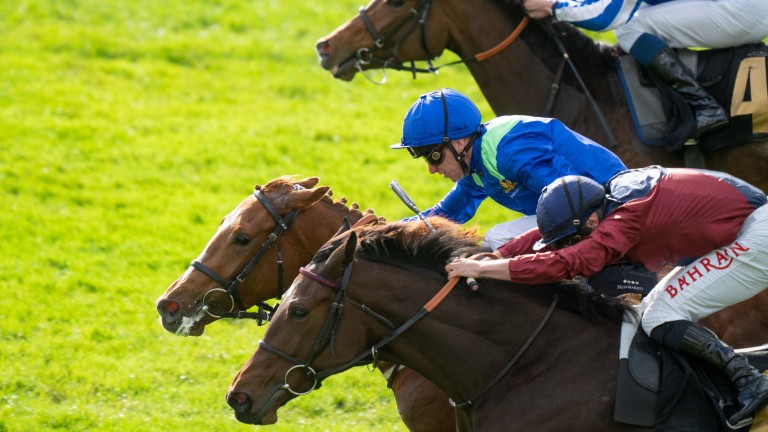 Canterbury Bell (near): given the verdict in the stewards' room
Edward Whitaker

Tom Marquand, rider of the latter for trainer William Haggas, said: "I would have been disappointed not to have got the verdict as I was carried halfway across the track, it's never a given but I had a strong case."

Joe Fanning, rider of the demoted filly, was later hit with a three-day ban for careless riding, which will be between November 3 and 5.

Jane Chapple-Hyam could have a 2,000 Guineas horse for next year as she struck with her second juvenile newcomer in two days when Claymore powered through a rainstorm in the 7f novice.

Just 24 hours after stablemate Heat Of The Moment scored at Yarmouth, Claymore made most of the running to see off Noble Order by four lengths.

She said: "I had to persuade the owner not to run him until now as these Kuwaiti's like to run them straight away. He could be a Classic horse."

Ton up for Appleby

New London brought up a century of domestic winners for the season for Charlie Appleby when coming from nearly last to first in the 1m2f maiden.

The son of Dubawi is from German stock on his dam's side and relished the soft conditions to collar front-runner Soul Stopper.

Appleby said: "Things are going well and we hoped New London would handle conditions and enjoy the trip. I’m delighted to get my 100th winner in the UK this year.

"It is great for the whole team and Godolphin. It has been a fantastic year and all the achievements are well deserved by everybody and long may it continue."

FIRST PUBLISHED 7:19PM, OCT 20 2021
In the end I'd rather me not be in it than Jean, who is sorely missed and many of her friends were here today