My Sister Sarah and Metaphorical contribute to Wayne Lordan's treble 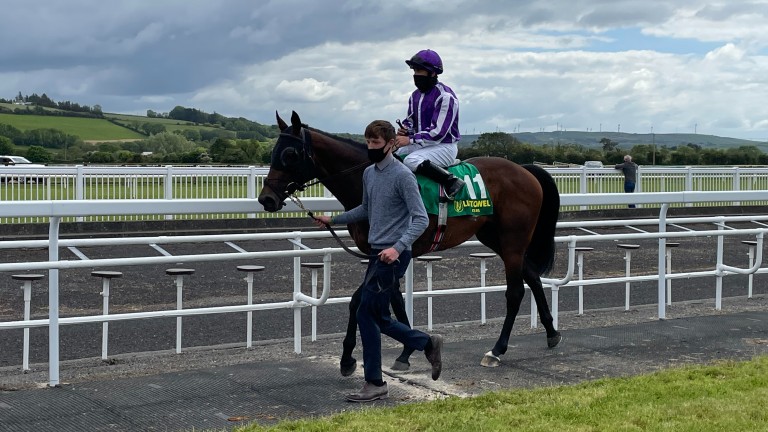 Metaphorical is led back in after helping supply Wayne Lordan with a treble at Listowel
Justin O'Hanlon
1 of 1
By Justin O'Hanlon 6:19PM, JUN 6 2021

Wayne Lordan enjoyed an eventful 19-1 treble, with two of the victories coming in the last couple of strides.

The most comfortable triumph came in the opening juvenile maiden when the Aidan O'Brien-trained The Acropolis accounted for his market rival Thunder Eclipse by three and a half lengths, having been beaten a similar margin by that rival at the Curragh on his debut.

Lordan said: "He benefited from his first run and come forward. He jumped and travelled and got to the line well. Riding him on a track like this, you feel that he could improve plenty. He's a fine strong two-year-old and a very likeable horse."

It was a first winner in Ireland for his sire Churchill, and Lordan added: "The Churchills we have are very nice movers and give a very nice feel."

It augurs well for the future of his stock if they can all improve like this one has.

The other two legs of the Lordan treble came with inches to spare. The Willie Mullins-trained My Sister Sarah just about got going early enough to touch off bottomweight Coventry by a nose in the 2m handicap.

The most surprising victory was recorded by the Ballydoyle colt Metaphorical, who showed a willing attitude to get up on the line and touch off odds-on favourite Emporio, who was last seen finishing fifth to Mac Swiney in the Irish 2,000 Guineas.

It was not totally plain sailing for Lordan, though. He was found to have used his whip with excessive frequency on My Sister Sarah and picked up a six-day ban.

Curragh trainer Andrew Kinirons had the first double of his fledgling career, winning both divisions of the mile 45-65 handicap.

He went through some emotions in all likelihood when topweight and favourite Mary Salome was all dressed up with no run on the inside rail in division one, but rider Luke McAteer was rewarded for staying where he was.

The mare picked up well when the gap appeared to score by a length and a half.

The second division was more straightforward as the Mikey Sheehy-ridden filly Praying Mantis stretched clear from over a furlong out to beat Crystal Pool by two and a quarter lengths.

Both fillies are entered to run in a 7f handicap at Cork on Wednesday. "I hope there's a divide," he joked.

Kinirons added: "This is my new favourite track and that is my first racecourse double, I hardly ever have two runners!"

"We have a lovely team coming up, we have 20 horses and while we have a handful of jumpers, 90 per cent are for the Flat. We are always looking for more!"

FIRST PUBLISHED 6:19PM, JUN 6 2021
Riding him on a track like this, you feel that he could improve plenty. He's a fine strong two-year-old and a very likeable horse

Hopes high of strong European team for Spring Carnival despite veterinary checks Plucked from obscurity, The Shunter could now add Galway Plate glory to his haul 'She's very much the matriarch' - You'resothrilling a true blue hen for Coolmore 'The more rain the better for Trueshan' - trainer quotes on the Group 1 Take a sip of Ballybrit Lite, it won't taste the same but you might like it 'A long-term target' - find out who could go close in the big day one handicap