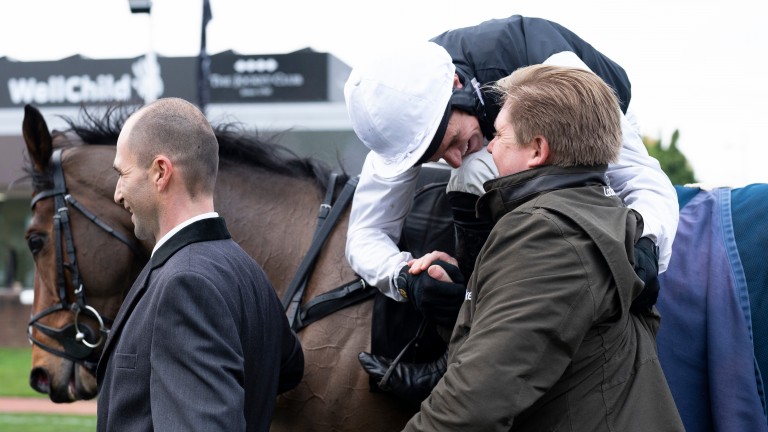 The Skelton brothers share a moment as West Cork returns to the winner's enclosure
Edward Whitaker
1 of 1
By Jonathan Harding UPDATED 9:11AM, NOV 15 2021

Dan Skelton described success in the Greatwood Hurdle as one of the biggest thrills he has experienced on a track after West Cork defied a 631-day layoff to complete a landmark day for the yard.

The trainer and his brother Harry had just combined to win the previous race, the Shloer Chase, with Nube Negra 35 minutes earlier and had still not come back down to earth when they watched West Cork hold on to win by three-quarters of a length.

"That was one of the biggest thrills I've had on a racecourse after the euphoria of Nube Negra winning," said Skelton, who was joined in front of the ITV cameras by his wife Grace and daughter Flo.

"You're due a come down after a high like that but to stay up there for another half an hour or so is magic. Professionally that's about as much fun as I've had on a racecourse – it's been an amazing day.

"After we decided to run Nube Negra due to the ground, we were driving back from the races and I told Harry we had nothing for the Greatwood so he told me to run West Cork as he wants two miles." 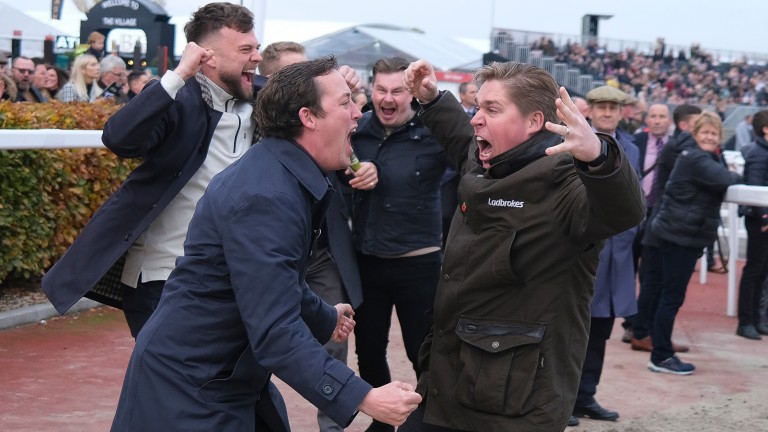 The Greatwood Hurdle helps establish the quality of the previous season's juvenile and novice hurdling form, but West Cork missed the entirety of that campaign last term after suffering an injury while he was being unloaded.

His last start came in February 2020 when he finished second in the Grade 2 Dovecote Novices' Hurdle, but fast-forward 631 days and he was finishing clear of Grade 1 winner Adagio in a hard-fought finish, with his key preparation being working alongside Nube Negra last week.

The win was made all the more impressive by the fact Skelton was without a whip for the end of the race. When his father Nick tried to return it, the jockey jokingly told him he no longer needed one.

It was a memorable meeting for West Cork's owner Mike Newbould, who after 40 years in the sport celebrated his first Cheltenham winner last month when Third Time Lucki won his chase debut. He now has three after that winner's success in a Grade 2 on Saturday.

The Skelton team have experienced every emotion at the meeting with the low of My Drogo falling with the race at his mercy on Friday, but Grace Skelton said they try to treat the highs and lows the same – though Dan was not in the best mood two days ago.

"He’s fairly philosophical as a general rule," she said. "There are hard days in this sport, but they are countered by really great days like today and that’s part of what we do.

"We’ve got to lead from the front and help bolster our team and we’re fortunate to have a fantastic one. Dan leads them from the front, he shows them that we bounce back for days like today – even after enduring tough ones."

FIRST PUBLISHED 3:10PM, NOV 14 2021
To stay up there for another half an hour or so is magic. Professionally that's about as much fun as I've had on a racecourse

'He's a proper Gold Cup horse' - Henderson switches focus to Chantry House Chantry House and Champ among big guns entered at Cheltenham this weekend It will be the roar of all roars - and now we have a Supreme worthy of it Meet the miracle workers with just four horses but eyes on the biggest prizes Are the opposition running scared of Bob Olinger? Four Turners talking points Will Gordon Elliott dominate again? Four National Hunt Chase takeaways