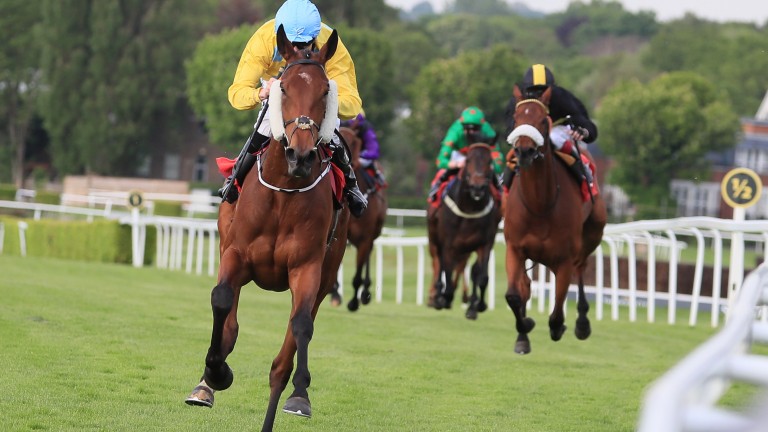 Ridden with supreme confidence by Jamie Spencer, the 14-1 winner stormed home from Ranch Hand, with 4-5 favourite Ocean Wind in third.

"She was excellent. There weren't many two-mile races at home so we thought we'd come over and give it a go hoping to finish third. Jamie was brilliant," said De Bromhead, who was asked by a member of the Sandown crowd whether he was not content with winning the biggest races over jumps.

"She's improving with time and is still developing. We would have been delighted with third so to see her storm up the hill was incredible – she stays so well and is so genuine. I keep telling Anthony [Rogers, owner] she'd be a lovely mare over hurdles but he's not buying it at the moment."

On future targets, the trainer added: "We were considering the Prix du Cadran at the Arc meeting. That was dreaming but maybe it's not now."

Euchen bounces back in Brigadier Gerard

Euchen Glen stayed on best to spring a 20-1 surprise and provide trainer Jim Goldie with his first win in the Coral Brigadier Gerard Stakes.

The eight-year-old picked his rivals off one by one in the straight before shrugging off his 3lb penalty with a powerful finish. He finished four and a quarter lengths clear of the favourite Sangarius.

Euchen Glen, who won the Group 3 St Simon Stakes last season, finished down the field on his first two starts of the campaign.

"Jim's horses have turned a corner in the last couple of weeks," said winning jockey Paul Mulrennan. "I ended up getting there a little bit soon because they stopped in front. It's a credit to Jim because Euchen Glen had a serious injury and was off for 18 months. 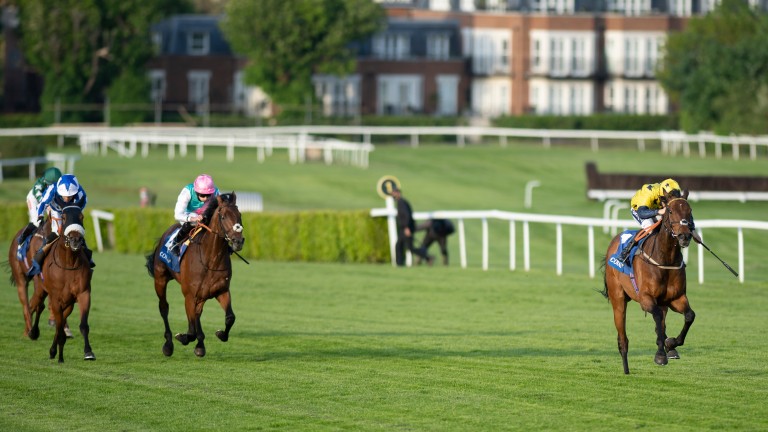 "It took him a couple of runs to build his confidence last year, but Jim and the team have worked wonders to get him back to this level."

The jockey added: "He definitely likes to get his toe in and the ground was perfect for him. With the way the weather has been, the Ebor at York could be an attractive option for him."

Ebro River did it the hard way but more than made up for his slow start when powering clear to land the Listed National Stakes.

The two-year-old, whose sire Galileo Gold won the 2,000 Guineas for trainer Hugo Palmer, hung badly left but produced a late burst of speed to finish three and a quarter lengths ahead of Little Earl under James Doyle.

"He's looked very smart from the first day he came in," said Palmer. "He's obviously still a bit babyish and has a few crinkles to iron out – how we do that, I'm not sure."

Ebro River was introduced at 14-1 for the Coventry Stakes at Royal Ascot, and Palmer added: "I'm not sure which race he'll go for. He wouldn't be able to give away four lengths in the Norfolk like he did tonight. He will get a mile in time and we'll gradually step him up in trip as the season progresses. He's got some growing up to do."

FIRST PUBLISHED 7:03PM, MAY 27 2021
I keep telling Anthony [Rogers, owner] she'd be a lovely mare over hurdles but he's not buying it at the moment

Paul Kealy fancies four horses to help boost the Royal Ascot betting bank Our top tipster fancies fast-ground lover to outclass her rivals This is all about Samcro - but will the one-time future megastar battle again? Singing Banjo calls the tune again after Punchestown festival heroics