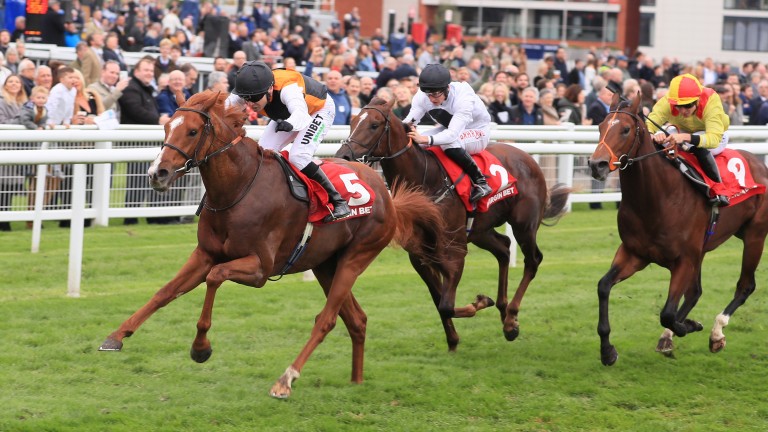 David Simcock looks to have found a Classic contender for next season in Horris Hill Stakes scorer Light Infantry.

The Newmarket-based trainer is eyeing up a tilt at 2,000 Guineas glory in Britain or abroad for the son of Fast Company, who overcame unsuitable soft ground to gamely win by a length and a half under Jamie Spencer.

Simcock said: "He got away with the ground today. He’s a good action horse, he’s done very well to sustain his challenge and being strong at line shows he’s got a good engine – it was really pleasing.

"He’s going to be a better horse on better ground, so we'll look at a trial in the spring and then work from there. If all goes well, we'll look at one of the Guineas next year, be it France or England."

Simcock hopes Light Infantry, a 33-1 shot to win the 2,000 Guineas with Paddy Power, can carry the flag for Trillium Place next season and beyond.

He added: "We've been lacking a star for the last three years, I've been selling horses and since Lightning Spear, Tepal and Sheikhzayedroad all left Desert Encounter has been holding up an end. It's great to get another good profile horse with his potential."

Simcock completed a double on the card when Ching Shih landed the mile fillies' novice under James Doyle – a family he knows well having trained her dam Madame Chiang to Group 1 success.

The Galloping to Give 10 Years With A Transplant Stakes was turned into a procession by 9-4 shot Jumbly and completed a double for Hollie Doyle, who also landed the opening 6f nursery on Gisburn.

The race was named to commemorate the ten-year anniversary of Henry Kimbell’s kidney transplant and started the charitable organisation Galloping to Give, which provides educational horse racing experience packages.

Kimbell said: "Newbury was my local course growing up and I plan to raise at least £10,000 for both of the hospitals who have been instrumental in my care."

FIRST PUBLISHED 6:42PM, OCT 23 2021
He’s done very well to sustain his challenge and being strong at line shows he’s got a good engine