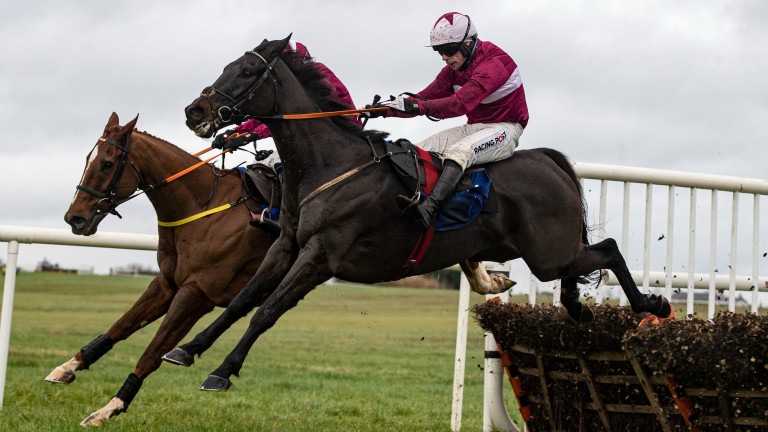 It was a day for Cork trainers to grab the headlines, particularly Jonathan Sweeney, who has had an impressive number of good young horses in his care for a small stable.

He may well have another in Churchstonewarrior, who landed a taking success in a competitive 2m7f novice hurdle.

Under a trademark confident ride from Denis O'Regan, the son of Mahler could afford to be out jumped by his main rival Idas Boy at the final two flights and still come back on the run to the line to win by a cosy half-length.

Sweeney, who also has high-class mare Roseys Hollow among his string, said: "It was a good performance. Denis was good on him; he rode him with fierce confidence and was very happy with him."

He added: "He's coming forward the whole time and I still think it will be another year before he is a proper horse. The Dorans Pride at Limerick over Christmas could be a race for him."

Beacon Edge may have been a late scratching from the opening beginners' chase, but that should take little from the performance of the Paul O'Flynn-trained West Cork Wildway, who put up a fine performance.

In lowering the colours of more vaunted rivals, The Bosses Oscar and Stratum, the son of Yeats looked as though anything he previously achieved would be eclipsed by what he might do over fences.

O'Flynn said: "That was very good. He took an unlucky fall last time at Killarney but he learned from it and is a nice horse.

"The owners have been a great syndicate for me and have backed me from the start. We always thought he was nice and he could have been sold for good money early on, but the lads told me to have a go with him. I don't know how far he can go but I'll take him as far as I can!"

Ryan not done yet

After his fantastic summer, things have quietened down a little for John Ryan, but not completely, and he looks to have another nice horse in Gaelic Arc, who landed the bumper under Finny Maguire.

An Arcadio half-brother to four-time French Grade 1 winner Galop Marin, he stayed on well in the final furlong to hold off Getaway Charlie by a length and a half.

Ryan said: "He's a smasher and Finny thought he won a bit snug. I would say we'll go for a winners' bumper because he handles soft ground. He's a lovely horse to have."

FIRST PUBLISHED 6:00PM, NOV 18 2021
He's coming forward the whole time and I still think it will be another year before he is a proper horse