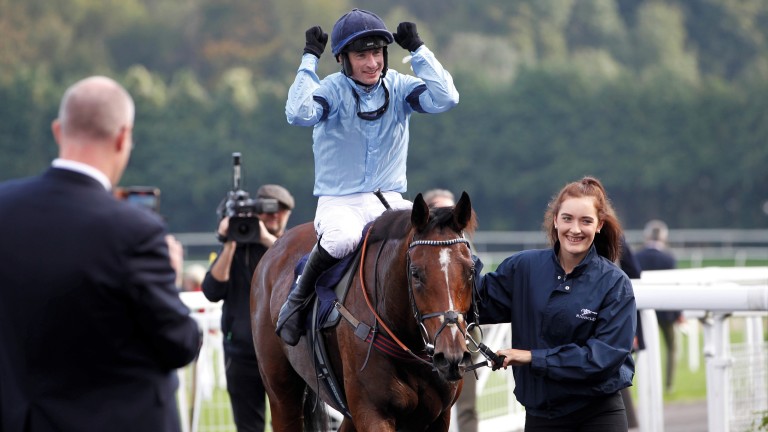 A jubilant Tom O'Brien returns to the winner's enclosure after winning the feature aboard Orbys Legend
Steve Davies
1 of 1
By James Burn UPDATED 6:26PM, OCT 9 2021

Tom O'Brien confessed he was unable to sleep on Friday night after watching Aidan Coleman and Camprond gallop away with the Grade 2 Persian War Novices' Hurdle for his boss Philip Hobbs, but he quickly banished the memory by riding a 95-1 double for the Somerset trainer, who has enjoyed a superb couple of days.

O'Brien, who opted for Luttrell Lad in Friday's feature contest as part of a Hobbs 1-2, made no mistake for Saturday's Grade 3 Wasdell Group Silver Trophy Handicap Hurdle as he guided Orbys Legend to a length success on his handicap debut.

O'Brien, speaking after Hobbs's third winner at the meeting, said: "He's an exciting prospect for the season ahead. It's a great testament to the team at home who put in the hard graft every single day and have got them here in top shape."

"I didn't sleep last night to be honest. The decision was down to me. I just didn't forgive Camprond for getting beat at odds-on at Stratford, but obviously being sent on early in the straight suited him."

The feature success completed a double on the afternoon for O'Brien after he rousted Masters Legacy, who was in fourth at the final flight, to victory by a head in the 2m handicap hurdle. O'Brien added: "I’ll sleep tonight! It goes with the territory, but today was a good day."

The win was a touching one for octogenarian owner Pam Bosley, who was watching on from her home near Taunton.

Trainer Hobbs's wife Sarah said: "The horse is named after her husband Geoff, who was a joint-master of the West Somerset Foxhounds. She had £30,000 inheritance to spend on a horse and he's now won three for us." 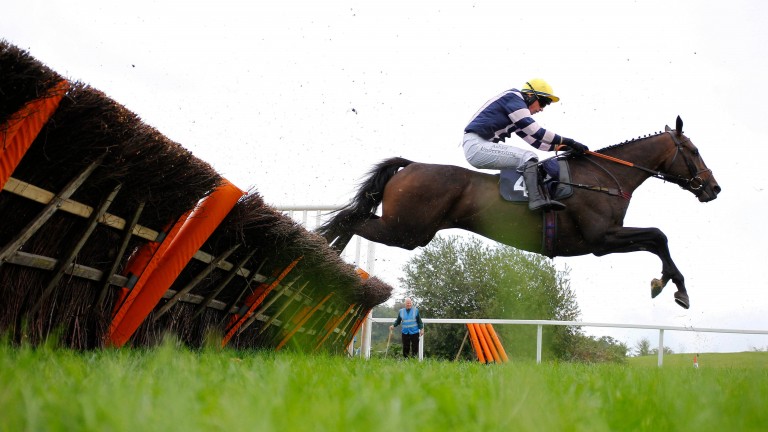 Tom Lacey was wearing two jumpers and has another smart one on his hands in Tea Clipper, a useful hurdler who promises to be even better over fences and showed just why by winning the novice chase.

"I can't afford a coat," joked Lacey, who, on a mild afternoon, was warmed by the performance of one of his stable stars.

"I'm very pleased. He was placed at Cheltenham and Aintree and he's a good-ground horse so there's no point trying to campaign him in mid-winter. We got him in in plenty of time and this race was always our target before he went out in the summer, so it's lovely it came off.

"I think he could be a better chaser than hurdler and we'll try to do Cheltenham and Aintree again, and you'd like to think he's a Graded horse." 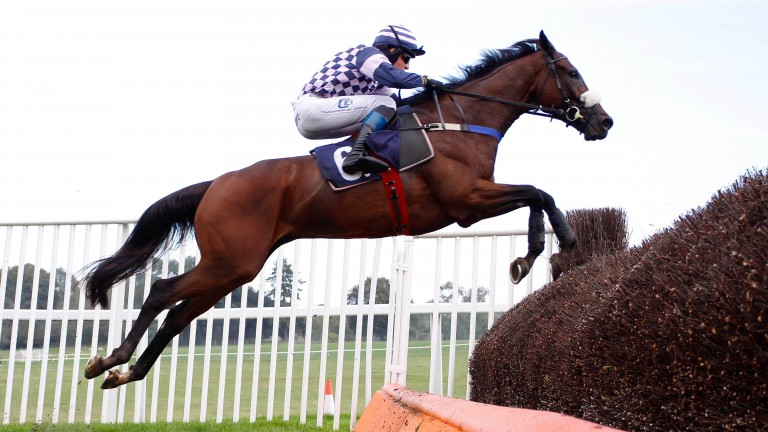 Nicholls on the mark

Paul Nicholls, who dominated this meeting last year, did not necessarily expect to have the same stranglehold on the two-day fixture this time, but he still landed the juvenile hurdle with Magistrato as well as the closing bumper with £175,000 purchase Timeforatune.

The champion trainer, who also struck with Knappers Hill at the track on Friday, said: "This time last year, our horses had been in two weeks earlier because of Covid and I think this meeting is a little earlier too, so whatever anything does they're going to improve.

"I'm not worried at all, absolutely not. The horses yesterday ran well and a lot will need it."

'He'll be something to be reckoned with' - Roque It impresses on chasing debut Nicholls keen on forecast rain to help Monmiral's cause ahead of Fighting Fifth Twiston-Davies rides peaks and troughs as family friend brings up 60 for season What they say: 'This has always been the plan but ideally we'd run beforehand' Blackmore hails a phenomenal A Plus Tard - and she was right Cesarewitch hero Buzz has his team dreaming of Stayers' Hurdle target