Hussey shines as Iowa mows them down for Ulster Derby success 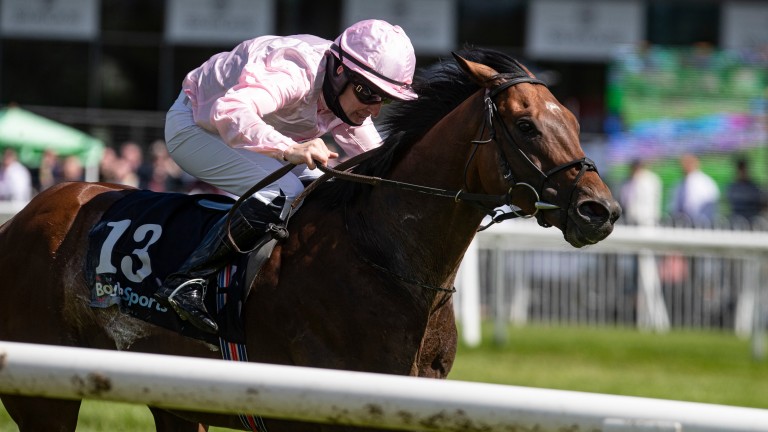 Jockeys attached to Ballydoyle can be in the situation where chances to shine on the track are sparse, but when the opportunities come they are there to be grabbed. Just ask Derby-winning riders Padraig Beggy and Emmet McNamara.

With senior riders involved at Royal Ascot for Aidan O'Brien, it was the turn of Mick Hussey to grab one of those chances as he guided 14-1 shot Iowa to victory in the BoyleSports Ulster Derby.

An eight-race maiden, the 79-rated son of Galileo was one of four Ballydoyle representatives here and came from off the pace to beat shorter-priced stablemate King Of The Castle by two and a half lengths. It was only Hussey's fifth ride of the season, four of them coming since Wednesday.

Hussey said: "He was game. He switched off well and appreciated every furlong. He's a mile six furlongs horse really. He didn't get a hard race there and can step up again.

"Everyone gets their chance at Ballydoyle and it's a great one to get while the lads are away."

It was O'Brien domination in the feature races as Joseph produced 22-1 shot Princesse Mathilde to readily land the BoyleSports-sponsored Ulster Oaks.

The daughter of Dalakhani put up easily her best performance in Ireland as she pulled out plenty under Mark Gallagher to see off main challenger Soaring Sky by a neck.

Assistant trainer Brendan Powell said: "Before she ran first time for us she was doing exceptional work but she was disappointing, whether it was the ground or not I don't know, but Mark said she absolutely loved that good ground.

"She travelled like a dream the whole way round. He didn't know what she would find when he picked it up, but he said she kept finding every time the other filly came at her.

"That was what we expected first time she ran. Hopefully she can go on from here and she might be a bit better than a handicapper."

The return of crowds has to start somewhere and 500 paying customers a day for this two-day meeting was the starting point for Down Royal, with racecourse manager Emma Meehan hopeful that number can be increased for the next meeting in late July.

The 500 racegoers did create a noticeably better atmosphere, and Meehan said: "We sold out last Thursday within an hour and we could have sold out seven or eight times over, and I think you can judge how it's gone by the good time people have had. The eagerness for people to return to Down Royal bodes well for us in the future."

She added: "The Northern Ireland legislation means we can operate in an indoor capacity for our next meeting on July 23 and we're hopeful that we can comfortably hold 1,500 people. That is due to be ratified on July 5, so fingers crossed that's what happens."

FIRST PUBLISHED 6:00PM, JUN 19 2021
Everyone gets their chance at Ballydoyle and it's a great one to get while the lads are away

'She's very much the matriarch' - You'resothrilling a true blue hen for Coolmore 'The more rain the better for Trueshan' - trainer quotes on the Group 1 Kings and queens of Ascot can illuminate the galleries on racing's day to shine Master Of Reality the one to beat in Her Majesty's Plate as old rivals clash Can Aidan O'Brien land his eighth Tyros Stakes in a row with Point Lonsdale? Aidan O'Brien hails 'incredible' St Mark's Basilica as focus turns to York