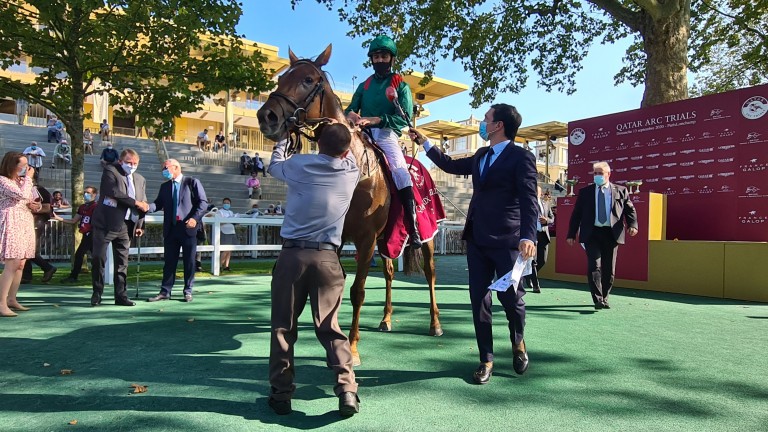 Christophe Soumillon gives his impressions after Tarnawa's victory in the Qatar Prix Vermeille
Racing Post/Scott Burton
1 of 1
By Scott Burton UPDATED 8:22AM, SEP 14 2020

Tarnawa turned in a winning performance as good or better than most witnessed in the Prix Vermeille over the last decade or so, in what has become a very influential trial for the Qatar Prix de l'Arc de Triomphe since Zarkava struck in 2008.

Carrying the same emerald green silks of the Aga Khan, Tarnawa was given a patient ride in behind by Christophe Soumillon and the four-year-old homebred daughter of Shamardal showed a real glint of class in motoring down the outside to pull three lengths clear of her field, with Raabihah also coming from the back to snatch second from longtime leader Dame Maillot.

Tarnawa is entered for the Prix de l'Opera back here in three weeks but would need to be supplemented for the Arc, a race for which she received a raft of quotes around the 16-1 mark.

Representing his father Dermot, Mark Weld did not rule out such a move, though both the Opera and the British Champions Fillies and Mares are also possibilities.

"I just spoke to my father and we'll have to talk to the Aga Khan's team," said Weld. "Today was probably the day for now but she was so impressive. We'll talk to Christophe again but it [coming back in three weeks time] is a possibility.

"It's thanks so much to His Highness the Aga Khan, his family and his team. This is a very prestigious race.

"We were hopeful. She's very consistent and is from a great Aga Khan family, which just get better and better. She's a joy to train."

Pushed to nominate the trip at which he felt Tarnawa would prove best, Weld added: "Ten [furlongs] possibly, but we will see. She has speed, she’s just a good filly and good fillies tend to go the extra yard. It’s worth a try."

Dermot Weld enjoyed a marquee day as Tarnawa's victory was followed swiftly by that at the Curragh of another patiently-campaigned filly in Search For A Song.

Reacting to Tarnawa's victory, his first in the Vermeille, Weld snr said: "The autumn was always the plan for her and she came back to me from Gilltown Stud looking in great condition. She went to Cork and won the Group 3 from Cayenne Pepper and it was just a real good performance. And she put up a real good performance today. Today was the day for both of them [Tarnawa and Search For A Song]. I'll have to speak to His Highness the Aga Khan and Pat Downes and we’ll come back with a plan."

Tarnawa's come-from-behind surge deserves extra marks considering the overall time of the race was a second and a half outside that of Mogul in the Grand Prix de Paris.

Raabihah also had to make up plenty of ground and Jean-Claude Rouget observed: "She ran well but this was not the same opposition as before. She has proved she is the best three-year-old filly in France. We'll see how she is in a fortnight but if she is well she will run in the Arc."

Dame Maillot showed tenacity to hold off the closers for third.

"She has produced a good performance to be third and she has been beaten by two good fillies," said Dettori.

FIRST PUBLISHED 3:48PM, SEP 13 2020
That was absolutely fantastic and she's a wonderful filly

William Buick not giving up on title dream without a fight after double strike Flying Visit makes it a Saturday to savour for Bolger and his young apprentice Who do our experts fancy for next season's 2,000 and 1,000 Guineas? Jim Bolger times it right to land Group 1 with Derby contender Mac Swiney Tom Segal keen to take on Old Roan favourite with a pair at decent odds 'I'm happy with that': Gordon Elliott unperturbed by Tiger Roll defeat