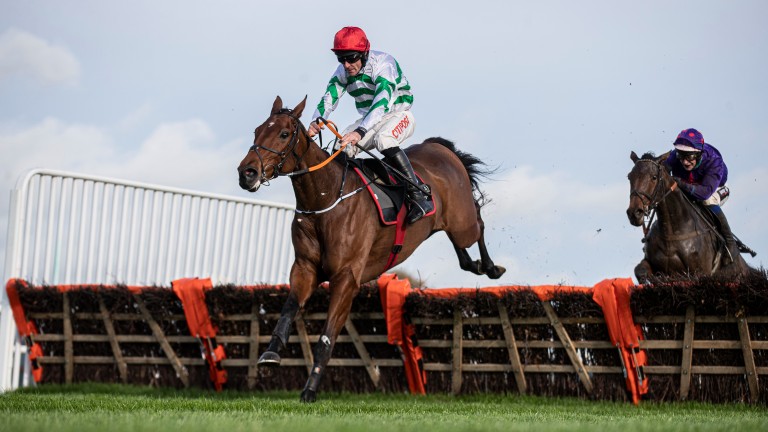 Gordon Elliott had won the Grade 3 John Lynch Carpets & Flooring Monksfield Novice Hurdle six times in the last decade and he added another exciting youngster to a roll of honour that includes Samcro and Death Duty when Hollow Games extended his unbeaten record to four from four.

A worrying late drift, which saw him ease from 2-9 all the way out to 2-5, proved to be wide of the mark as he quickened up smartly to win what turned into a sprint up the home straight.

Elliott was impressed, saying: "He's a nice horse. It turned into a sprint and Davy [Russell] said after the race that he's not as slow as you think he is. He really quickened. He put his head out and galloped.

"I was worried as they went no gallop but he will have learned a lot there. I think he'll go to Naas now [for the Lawlors of Naas Novice Hurdle]. He races behind the bridle but he's a real nice horse. It's great for Noel and Valerie [Moran] as it's local and it's on terrestrial television [RTE] today."

Hollow Games is the new Albert Bartlett favourite after BoyleSports and Paddy Power both trimmed him to 8-1.

How fitting that on the day Navan celebrated its 100th anniversary the chairman of the track won the finale with a filly who could just be the next big thing to come out of Castletown.

The Model Kingdom, trained by Noel Meade and sent off 2-1 favourite for the Listed Coolmore NH Sires In Swoop Irish EBF Mares Flat Race, travelled into the lead like a seriously talented filly but the problem was that it was well over two furlongs out.

It was a long way from there to the line but her ability got her home under a strong ride from Pat Taaffe, and she had a length and a half to spare over Harmonya Maker at the line.

Meade, the track's long-serving chairman, said: "I almost got heart failure there. The last thing I said to Pat was 'don't be in front before you get to the last fence'. I would have been disappointed had she been beaten today but, having said that, we're disappointed so often that you get used to it. I sweated a little in the last furlong but I'd say she's a very good filly.

"The mares bumper at the Dublin Racing Festival would have to be the race you would look at for her next. If she gets through that, you might look at the mares' bumper at Aintree but we'll have to see. She was a bit buzzy but she's quietened down well now and she's from a very good family."

Speaking of that family, The Model Kingdom's mother Fickle Fortune was second in the same race in 2012 when she found only Joanne One too good.

Blackmore returns with a winner

Fresh from A Plus Tard's awesome display in the Betfair Chase, Rachael Blackmore was back on home soil to win the beginners' chase on Kapard. It was a seriously good ride too as she timed her challenge to perfection to reel in the tearaway Mt Leinster.

Blackmore said: "It was a small field but there was plenty happening. It was a great performance by her and hopefully she's going to do a lot more over fences than she did over hurdles. It's a great starting point for her.

"I thought turning in I still had plenty under me. She picked up the whole way up the straight, idled a bit when I got to the front but then battled back really well again."

The easiest winner was Futurum Regem, who took the 2m6f handicap hurdle by nine lengths under Dillon Maxwell for another local trainer, Hugh Finegan.

FIRST PUBLISHED 6:41PM, NOV 21 2021
I almost got heart failure there. I would have been disappointed had she been beaten today