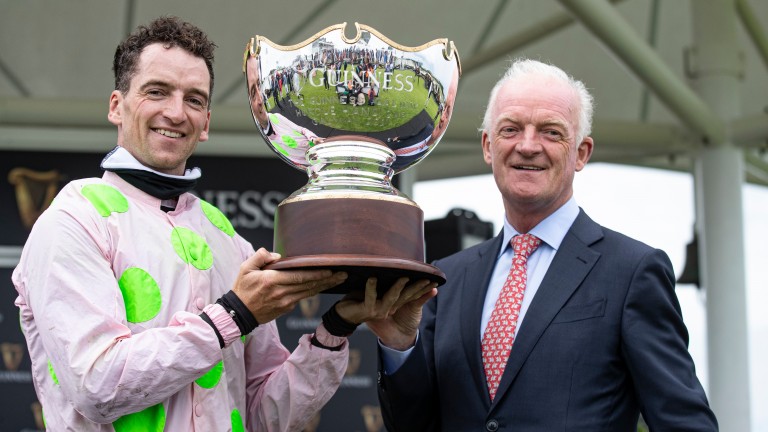 Willie Mullins (right) with son Patrick after the victory of Saldier in the Galway Hurdle
Patrick McCann
1 of 1
By Richard Forristal UPDATED 10:26AM, JUL 30 2021

Willie Mullins has made Ballybrit his own personal fiefdom in recent years and his glorious reign is now embellished with the distinction of being the most successful trainer in the 108-year history of the Guinness Galway Hurdle thanks to Saldier’s classy weight-carrying triumph under his son Patrick.

The father-son combination is becoming something of a standing dish in the €250,000 showpiece, having combined to win three of the last four. Following Royal Rendezvous' Plate coup a day earlier, it was a win that also saw Mullins become the first trainer since Edward O’Grady in 1979 to plunder the Plate and the Hurdle in the same year.

Jonjo O’Neill rode both the Plate winner Hindhope and the Hurdle hero Hard Tarquin for O’Grady. In victory here, the 13-time champion amateur emulated O’Neill by becoming the first jockey to win three Hurdles since Dawn Run’s iconic rider also bagged a third in four years on Pinch Hitter in 1983.

“It’s fantastic for Patrick,” said the winning trainer, who bagged a fourth win of the day when his son doubled up on M C Muldoon soon after.

“To win a third Galway Hurdle is an extraordinary achievement. I know he is kicking himself that he isn’t able to win the Connacht Hotel Qualified Riders’ Handicap here on the Monday night but I don’t think he’d swap one of them for three Galway Hurdles – it’s extraordinary. The commitment he has, I just marvel at what he does at his age, with his height and weight and everything."

Just like Sharjah in 2018 and Aramon last year, Saldier also carried top weight to his decisive two-length success at odds of 18-1. A year ago, Aramon defied 11st 10lb off a rating of 155 to record the most impressive weight carrying performance in over two decades, and the Susannah Ricci-owned Saldier replicated exactly that accomplishment here.

Settled in behind the early leaders on the rail by Mullins, he had to be angled out to make his challenge as they swung towards the final flight. At that stage, the Emmet Mullins-trained Cape Gentleman, the gamble of the race who was backed into 6-1 favouritism, touched down in front.

All the while, though, Patrick Mullins had him in his sights. He swerved around his cousin’s charge and within 50 yards had got by him and stretched away in a heartbeat.

The British challenger Milkwood kept on gamely to nab second on the line by a head from Cape Gentleman, with Jesse Evans another head back in fourth in what was a pulsating spectacle. 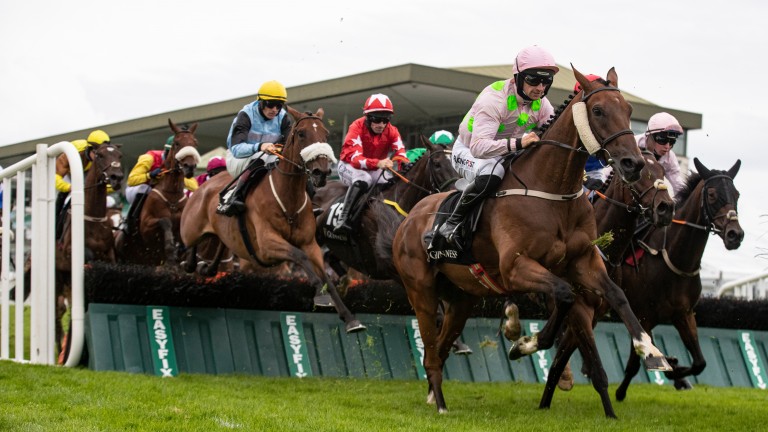 It was the champion trainer’s fourth Hurdle win in the space of six years, and his fifth in total following his breakthrough victory with Mystical City in 1996.

His legendary father Paddy won the last of his four with Camden Buzz in 1993, a feat that was also achieved by Barney Nugent in the 1940s and Clem Magnier up to 1981.

Mullins now stands alone atop that pile. Getting Saldier, a dual Grade 1 winner, back to his best is up there with some of his finest achievements, as he is a horse who has lost his way at times, most recently after winning the 2019 Morgiana Hurdle. He opted for first-time cheekpieces here, and they certainly did no harm.

“We had tried everything with him,” Mullins admitted. “It was just the prize-money that was the lure to come here. A prize like that, we needed to have a crack at it anyway. I put the cheekpieces on to concentrate his mind and Patrick thought he was travelling well at all stages. He just got into a few traffic problems around the second-last but when he got out then he came through. He was very brave throughout the race and jumped great – he never missed a beat.”

Mullins suggested the seven-year-old could now revert to the Flat, although he was non-committal on plans.

Of his own stunning achievement, the winning rider said: "I never thought I'd get to ride in the race, let alone win it, as an amateur at my weight. I'll have to try to win the Connacht Hotel Handicap next year, and the Plate is on the list as well. We have more to do."

FIRST PUBLISHED 6:31PM, JUL 29 2021
We had tried everything. It was just the prize-money that was the lure to come here