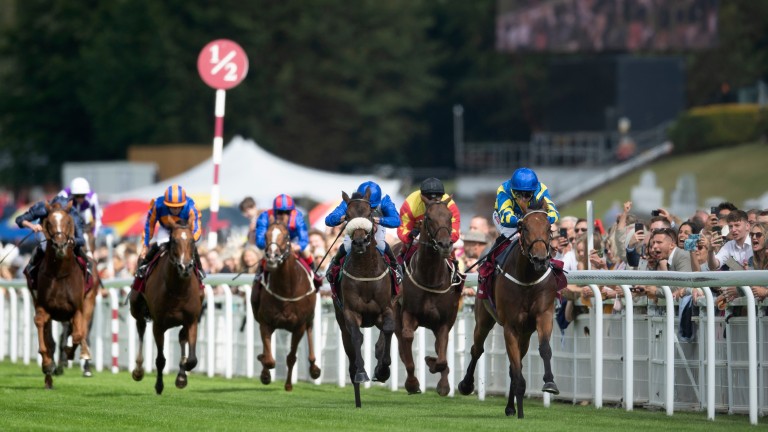 Trueshan (right) stayed on best to win the Goodwood Cup under Hollie Doyle on Tuesday
Edward Whitaker
1 of 1
By Jonathan Harding UPDATED 9:03AM, JUL 28 2021

Riding short-priced favourites at the top level may still be uncharted territory for Hollie Doyle but she showed no signs of inexperience when taking the initiative aboard Trueshan in the Al Shaqab Goodwood Cup.

Her decision to switch the five-year-old to the rail on the straight was met with cries of 'Go On Hollie' from the stands, which quickly gave way to rapturous applause when they hit the rising ground and powered three and three-quarter lengths clear of Away He Goes.

The winner's enclosure was lined with people when they returned after a long wait and among the first to congratulate them were trainer Alan King and part-owner Andrew Gemmell, who added a big winner at Glorious Goodwood to Cheltenham Festival victory with Paisley Park.

"I was very confident but I've not had many top-level experiences, especially not on a short-priced favourite, but he's exceptionally talented on this ground," said Doyle, who was jokingly asked for an autograph on her way to weigh in after winning her second Group 1.

"There was no gallop and I expected a bit of pace so halfway round I thought, 'I'm going to do something about this', as I didn't want to get caught on the rail – he just went when he hit the rising ground."

Doyle appeared relaxed before the race but admitted there was extra pressure following the withdrawal of the favourite Stradivarius due to the testing ground, which meant Trueshan was sent off at 6-5.

It could hardly have been more different to the pair's memorable success in the Long Distance Cup in October, when her mount was sent off at 11-1 and returned to mostly empty stands at Ascot.

"I got some buzz off of that," added Doyle. "I try not to get too high or low but you have to make the most of experiences like that one." 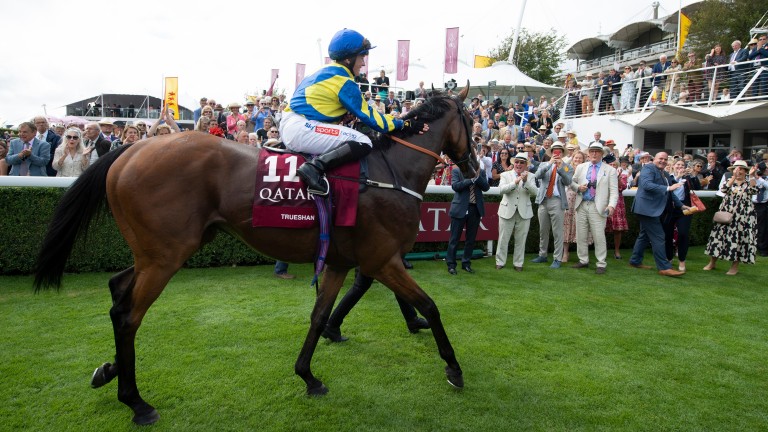 King certainly did. The trainer was not a regular at racecourses during the height of the pandemic and said he was a "little out of practice" after celebrating his breakthrough Group 1 on the Flat.

Asked how it compared to his victories in some of jump racing's biggest prizes, King said: "It's right up there with the Champion Hurdles and things, of course it is. All I want to do is train proper horses – I really don't mind whether they're jumpers or not."

Trueshan certainly falls into that category but that does not mean King was not nervous, especially after Stradivarius's withdrawal.

"I was okay until about 1.30 – maybe it was too many glasses of red wine – but suddenly the nerves kicked in when John [Gosden] took out Stradivarius and we got shorter and shorter," the trainer added.

"Then the nerves kicked in and I've not felt like that for a long time. I haven't been racing much in the last 18 months and I don't think I've ever saddled him to win so I was nearly told to stay at home."

"Hollie Doyle dejected when they took him out on Gold Cup day, patience is a virtue!"#RacingPostLive pic.twitter.com/Lhmnxn6fdy

Trueshan was on course to run in the Gold Cup at Ascot but he was redirected to the Northumberland Plate due to unsuitable ground.

"He was just a little bit keen but he can be like that," said King. "Thank God we came to Newcastle because he could have been fairly ferocious today so I was glad he had a proper race there and then we were able to let him down for a fortnight and build him back up.

"A lot of people thought we were mad running him off that weight but he needed to go somewhere then. He was ready to go at Ascot and I couldn't run him, it was very important he had a race then.

"It was a no-brainer to take him out at Ascot. The rain was never coming and you just can't run this horse on quick ground so it wasn't that difficult a decision and luckily we put him in at Newcastle."

Fortunately for King, the "gods were kind" to him with the rain this week, which was much more than forecast, and he said Trueshan's next target will almost certainly depend on the ground conditions.

"He's in the Lonsdale," said King. "We'll probably take him out of the Irish Leger on Wednesday. The Prix du Cadran would probably be his big target for the autumn but he's very ground dependent. Good ground is fine because it's safe but he's more lethal on this ground."

Read more from day one at Goodwood:

FIRST PUBLISHED 3:45PM, JUL 27 2021
I was calm all morning and then Stradivarius was pulled out and we got shorter and shorter – that's when the nerves kicked in