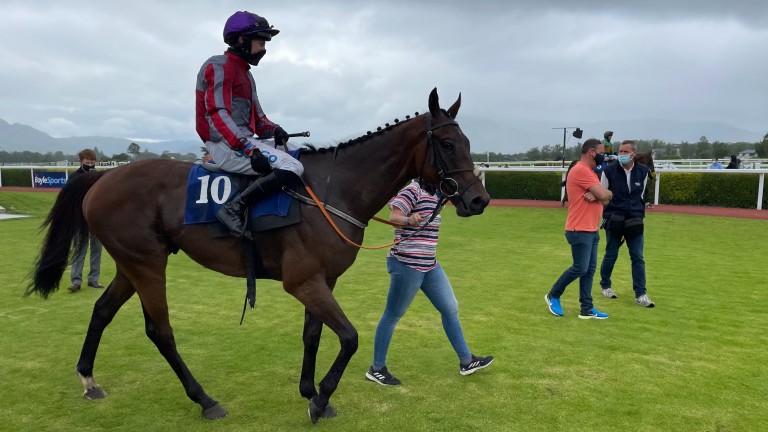 The Tom Mullins-trained Excelcius finally showed what he can do over hurdles as he ran out an emphatic winner of the feature 2m1f handicap hurdle on the penultimate day of the track's July festival.

Watching the race, one would wonder how the horse had won only one of his previous 25 starts, but he travelled well for Sean O'Keeffe, who got the response he wanted when asking his mount to pick up.

The impressive winner could now get a big enough hike to sneak into one of the nice handicap hurdles at Galway, and might not look out of place on this evidence.

O'Keeffe said: "He was a bit keen through the race but they went a nice gallop and he jumped really well. He was good and he is starting to progress and learn his job over hurdles. He was a nice horse on the Flat and he showed a bit of pace today."

What drama there was on the day was mostly confined to the second division of the 2m4f handicap hurdle, which proved memorable for trainer Eamon Courtney as he saddled his first winner under rules at his local track.

He had to settle for a dead-heat though with Da Big Fella, owned by his sister Valerie and ridden by Phillip Enright, being joined on the line by joint top-weight Christmas Jumper.

It's a deadheat! Da Big Fella and Christmas Jumper cannot be split by the judge pic.twitter.com/WJ4glUbsFA

It did not spoil the occasion for the imposing Courtney, who trains over the road from the course at nearby Muckross.

He said: "We bred the horse ourselves so we're delighted. We've had horses with different trainers in the past but it's the first one we've trained ourselves and he is a horse that has really improved this year.

"We've only six horses riding out, all our own, and I've had the licence three or four years. We have had a few point-to-point winners, and it's great to have our first winner at home at Killarney."

Christmas Jumper would have been unlucky not to get a share of the spoils as Rachael Blackmore almost had to pick him up off the floor after he was badly hampered before three out.

His co-trainer Patrick Harty commented: "He took a bit of time to get himself back together after the incident but he ran to the line and was brave. He would have been very unlucky and hopefully he can win another one."

Once the declarations were made on Tuesday, the question was whether Ruaille Buaille would break the record for the shortest starting price in Irish racing history with just two vastly inferior rivals to contend with in the 2m4f mares' hurdle.

She had to make do with equalling the record.

After cruising to a 22-length victory under Paul Townend, the Willie Mullins-trained mare was returned the 1-25 favourite, equalling the winning SP of the ill-fated Wicklow Brave, also trained by Mullins, in a race at this venue in 2018, and the Gordon Elliott-trained Fury Road, who landed the Grade 3 Monksfield Novice Hurdle at Navan in November 2019.