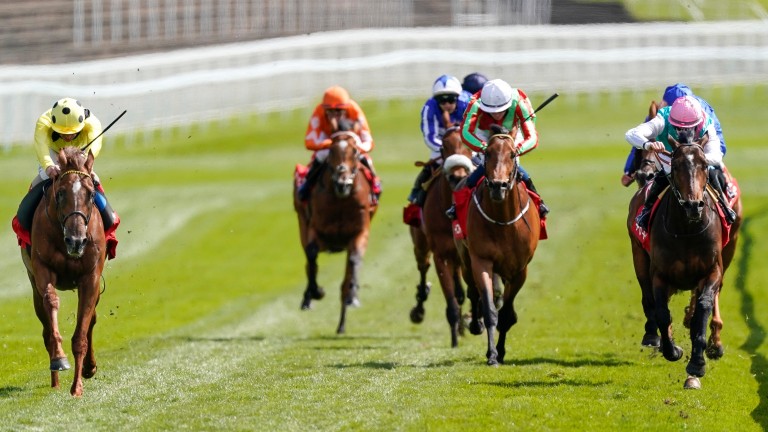 Those searching for some much-needed Classic clarity in the Dee Stakes got a Derby pointer – but maybe not for Epsom.

El Drama, sent off a largely unconsidered 12-1 shot for one of the spring's key trials, took the step up in class in his stride to earn quotes ranging from 16-1 and 33-1 for the Cazoo-sponsored Derby on June 5.

However, trainer Roger Varian and owner Sheikh Mohammed Obaid Al Maktoum were leaning towards the French equivalent over the shorter trip for the son of Lope De Vega, although all options will be considered.

Despite showing his inexperience, El Drama unearthed major improvement from two third-placed finishes on the all-weather this year.

Varian was pleased to see the colt stay the trip on his first try at 1m2½f, but he was unsure about the suitability of the Derby distance.

Speaking from his Newmarket yard, the trainer said: "We thought he'd stay ten furlongs well and be a better horse back on grass and we're delighted to see him do today what we've always thought he was capable of.

"He was enthusiastic but he was racing professionally and once I saw him not over-racing I was confident he'd get home. It was nice to see him reignite his reputation and his campaign."

Regarding future targets, Varian added: "If he did run in a Derby there would be a question mark whether he'd get a truly run mile and a half. You wouldn't know until you tried it, but he's not short of pace and ten furlongs might be his best trip for now.

"Having spoken to Sheikh Obaid, all options are open and he'd like him to be considered for the Prix du Jockey Club [at Chantilly on June 6]."

Winning rider Andrea Atzeni voiced a similar opinion after steering his mount down the centre of the straight to score by a length from Maximal.

"He showed a lot of ability as a two-year-old and we were treating him as a Guineas horse, so we had to get a couple of runs into him to get some experience. He ran well but we knew he'd be a better horse on the grass," he said.

"He's bred to stay and there were solid horses in the race. At the moment I think a mile and a quarter is as far as he'd want to go but that's not for me to decide."

On a day when Lingfield Derby Trial absentee High Definition was usurped at the head of the Derby betting, the Dee Stakes, like the Chester Vase the day before, failed to provide a clear picture for the Derby.

Fallon to give up York rides to partner The Lir Jet in French 2,000 Guineas

FIRST PUBLISHED 2:30PM, MAY 6 2021
If he did run in a Derby there would be a question mark whether he'd get a truly run mile and a half