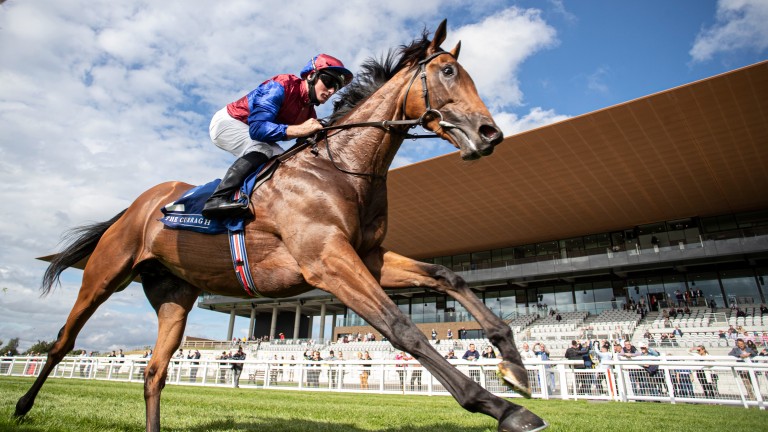 Luxembourg wins the Beresford Stakes under Seamie Heffernan at the Curragh on Saturday
Patrick McCann (racingpost.com/photos)
1 of 1
By Justin O'Hanlon UPDATED 7:31PM, SEP 25 2021

Luxembourg stormed to the top of the betting for the 2022 Cazoo Derby with an impressive display in the Alan Smurfit Memorial Beresford Stakes, giving Aidan O'Brien his 11th consecutive success in the Group 2 and 21st overall.

Although main market rival Swan Bay disappointed, few of O'Brien's previous winners look as potentially exciting as this son of Camelot. He was cut to a general 10-1 joint favourite for the Derby after this performance.

In the Westerberg colours, carried to victory a matter of minutes earlier by Tenebrism in the Cheveley Park Stakes at Newmarket, Seamie Heffernan rode Luxembourg with plenty of confidence, tucking him in at the back of the field and enjoying an instant response when asking him to quicken over a furlong out.

Despite drifting to the far side, he went away up the hill to win by nearly five lengths from outsiders Manu Et Corde and Tuwaiq, with market rival Swan Bay fourth. 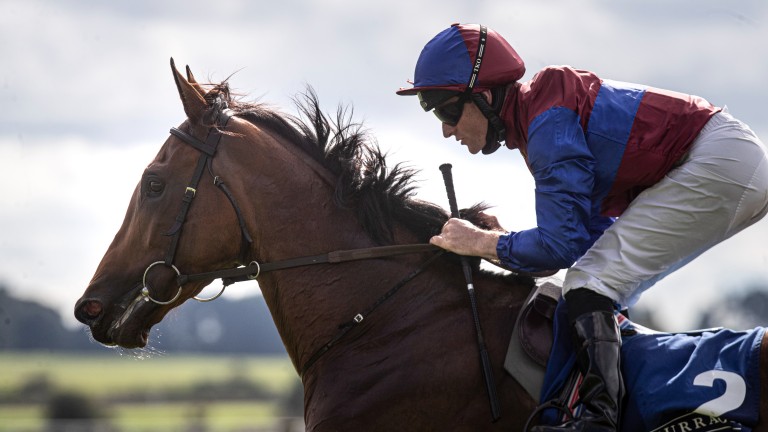 Straightforward success: the son of Camelot bounded clear of his rivals at the Curragh
Patrick McCann (racingpost.com/photos)

Luxembourg had originally impressed when winning on his debut in a maiden at Killarney in July, a venue where O'Brien has won maidens with subsequent Derby winners Wings Of Eagles and Anthony Van Dyck.

Heffernan said: "He's very smart at home and has proven it twice now. He's very talented and I was very impressed.

"He's a very impressive individual. When they have a turn of foot like he does, a mile is not out of his reach, although that is a race for middle-distance horses, but a mile is well within his comfort zone.

"Aidan gave me plenty of confidence and I was very confident every step of the way. He was a steering job and I was happy to be on board.

"His dad was a good staying horse and he had the pace and class to win a Guineas. The turn of foot he showed me today was exciting, so I don't know where he'll be targeted. He's a well-balanced colt and a fine lump."

Speaking from Newmarket having after watching the race, O'Brien said: "He has always been a horse to show us a lot of class and you would have to be pleased with the way he did that.

"After Killarney the plan was to go to the Beresford Stakes and then go to Doncaster for the Futurity, so we'll talk to the lads and see what they want to do."

Terrific Tenebrism surges home under Moore to give O'Brien another success

FIRST PUBLISHED 2:45PM, SEP 25 2021
His most impressive aspect is that he knows he's good and he doesn't show it off

'Four Gold Cups, an unbelievable horse' - Aidan O'Brien recalls Ascot hero Yeats Order Of Australia 'didn't show up' as he trails in last in Keeneland Grade 1 'Man among boys' - Native Trail storms home in Dewhurst to cement Guineas claims Ryan Moore: 'I try not to offend anyone but for me it's always about the horses' Aidan O'Brien: 'Drug talk must stop - don't tear apart the sport with no facts' Love misses Champions Day as Aidan O'Brien reroutes Snowfall to Fillies & Mares