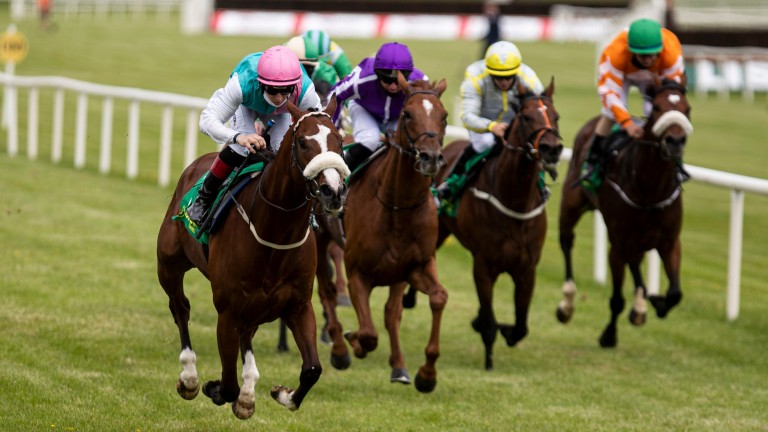 Probe: impressive winner of the feature at Listowel on Saturday
Patrick McCann
1 of 1
By Justin O'Hanlon UPDATED 10:50PM, JUN 5 2021

On a day when the late Derby winning jockey Pat Smullen was among those remembered at Listowel, it was fitting that Dermot Weld recorded his first double of the season – headlined by the performance of Probe in the feature 7f rated race.

In the Juddmonte colours – worn to victory so many times by Smullen – the Colin Keane-ridden Probe followed up his seven-length Killarney maiden win the previous month with a classy display.

Keane showed what sharp elbows he has when manoeuvring Siskin to daylight in last year's Irish 2,000 Guineas, and they were displayed in a similar light here as he had to manufacture a gap for the Kingman colt in the straight. When he saw daylight though, Probe quickened smartly to beat San Martino and the somewhat unlucky favourite Corps Des Pages by two lengths.

Keane said: "He's progressing with racing. The step up to a mile suited him at Killarney and he's sharpened up since then. He was man enough when we needed to get out.

"I think he could get up to a mile and a quarter in time, although he's not a slow horse. He's versatile and that ease in the ground suits him well."

Keane and Weld had teamed up successfully earlier in the afternoon when Tashgheel took advantage of a good opportunity in the 6½f maiden. The gelded son of Dark Angel showed that he too likes cut in the ground as he took command close home to account for the Fozzy Stack-trained pair Moving For Gold and Stalingrad.

Those winners formed the first two legs of a 524-1 treble for the champion jockey which was completed by victory in the first division of the mile handicap on Shazza for Philip Rothwell.

Tom Egan and Bridget Dillon's mare won with some authority, striking by two lengths from the staying-on Mudawy, and the significance of it was not lost on the winning trainer.

He said: "It's great that Listowel have put on these racenames and I had a great affiliation with Pat myself. I was thinking of all the races he won down here for me especially the day he won one of the big handicaps on Rose Hip. He was a special man."

On Galtee Mist, he added: "She's a good mare. She was one horse that did well for us last season and we haven't done anything different with her this year, we just sat and waited for the right race.

"We'll go to Gowran on Monday over seven and then we'll try and get a bit of black type. She goes on any ground."

FIRST PUBLISHED 6:02PM, JUN 5 2021
I think he could get up to 1m2f in time, although he's not a slow horse. He's versatile and that ease in the ground suits him well.