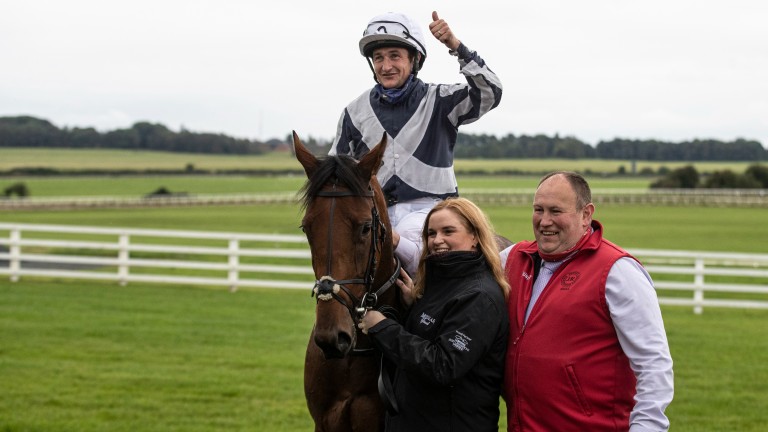 Saturday's Group 1 celebrations were put on hold pending the outcome of a stewards' inquiry but there was no such delay to Shane Foley and Jessica Harrington's unbridled joy after Discoveries upheld family honour with an ultra-gutsy Moyglare Stud Stakes success.

Beautifully bred by owners the Niarchos Family as a sister to superstar filly Alpha Centauri and half-sister to dual top-level winner Alpine Star, the 17-2 shot had too much for the courageous Agartha after a hard-fought final furlong.

The only Group 1 defeats in Alpha Centauri's career came as favourite for this race and the Matron Stakes, but any memories from those losses were banished by the unstoppable Commonstown trainer, who came away with both prizes on a sensational weekend. 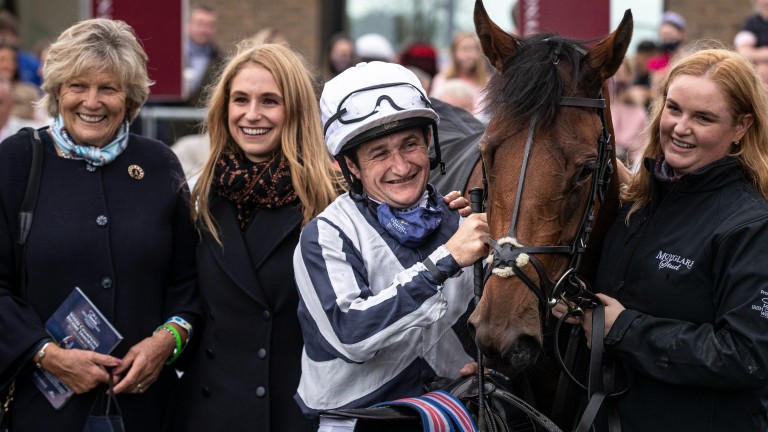 Jessica Harrington with Discoveries and Shane Foley after the Moyglare
Patrick McCann (racingpost.com/photos)

"How can I be so lucky to have three fillies out of the one mare all win Group 1s?" said an ecstatic Harrington.

The supplemented Cairde Go Deo was well backed to continue Ger Lyons' outstanding weekend and was sent off the 85-40 favourite, but seemingly over-raced before fading to sixth, while Homeless Songs was a shade disappointing. 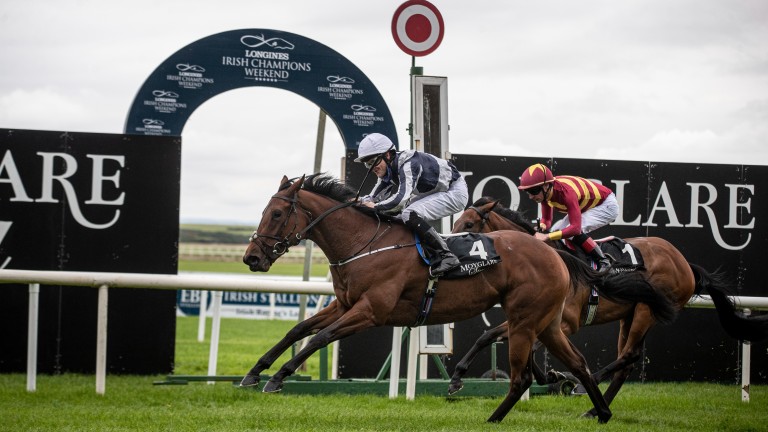 Discoveries: got the better of Agartha in the Moyglare Stud Stakes
Patrick McCann (racingpost.com/photos)

"I thought I'd get closer to Agartha today sitting closer to her on better ground. There was no hiding place, we were skipping along, but I knew this filly had stepped forward from the Debutante. She's still quite green and had never gone that fast in her life."

Bookmaker reaction was mixed with a view to next year's Qicpo 1,000 Guineas. Betfair Sportsbook introduced her at 20-1, whereas Ladbrokes were more impressed and cut her to 10-1 (from 33).

Harrington, who saddled four winners across the weekend, said: "To win two Group 1s this weekend is something else. We'll sit down with the Niarchos Family and have a discussion as to what she'll do next. It's very special to win this."

'Everybody had a fair chance' - new cutaway rail at Leopardstown gets thumbs up Classic prospect Sissoko has Donnacha O'Brien dreaming of Epsom glory 'It can get congested' - Leopardstown to trial cutaway rail on Saturday Plan comes together perfectly for 84-year-old John Kiely in Irish Cesarewitch Can Charles Byrnes claim the Irish Cesarewitch with in-form Turnpike Trip?