Baltinglass shows Blackmore at her brilliant best on bittersweet day 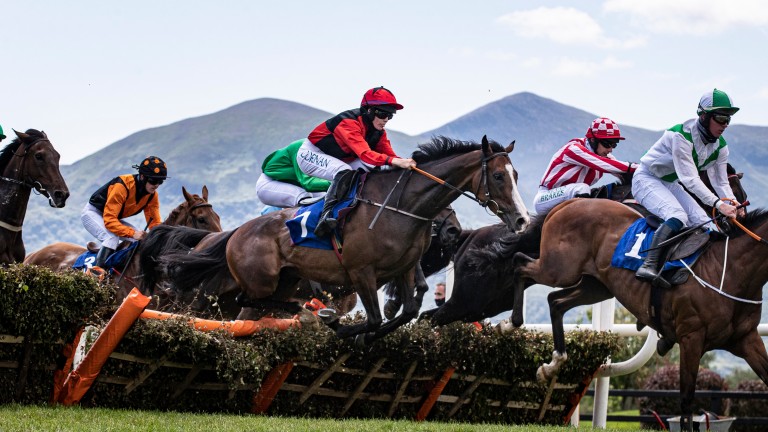 Everyone in racing will hope Rachael Blackmore's spell out of action is brief after her fall from Merry Poppins, which came 35 minutes after showcasing her capabilities in the saddle and willing home Baltinglass Hill in the second division of the 2m1f handicap hurdle.

It was a race she had no right to win. Her mount was running on, but leader Rich Belief was a length or two in front and travelling strongly coming to the final flight, but in a typical piece of Blackmore bravado she fired her mount at the hurdle and he landed running and in front. He held on by a nose, much to the delight of a raucous group of about a dozen racegoers who had clearly just collected.

"Rachael at the last, oh my god, class! It made all the difference!" said winning trainer Philip Rothwell, and nothing more needed to be said. Let us hope that it is not too long before another winning trainer is expressing similar sentiments about Blackmore.

Rothwell recorded the opening leg of a double in the first division of the contest when Ricky Langford came through from off the pace under Paddy O'Hanlon to win by three and a half lengths.

"I thought he would win, he's a good-ground horse. Paddy was down to ride one at Kilbeggan and I told him to get off it and come down here, so it worked out really well for him," said Rothwell.

"Ricky Langford is owned by a syndicate made up of school friends of mine. He won for them last year. He's similarly handicapped over fences so we might go for a handicap chase this summer."

The rest of the day belonged to Henry de Bromhead, who landed a A 105-1 treble with three different riders, starting with Leac An Scail Lady, winner of the opening mares' maiden hurdle under Blackmore.

The highlight of his hat-trick was the convincing success Capuccimix, who landed the feature BoyleSports Handicap Chase, which was delayed 15 minutes as medical staff treated Blackmore on track.

The winner contested big-field and ultra-competitive handicap chases over the spring, and appreciated this easier test as Jordan Gainford partnered him to a six-length victory over Everlastingpromise.

"He loved the ground. He had a nice break after his last outing and Henry was very confident of a good run. He's been in big handicap chases so it's great that he got his day," said Gainford.

The improving Cavalry Master completed De Bromhead's treble in convincing fashion when winning the 2m7f novice chase. The son of Milan won for the fourth time in a row under Mike O'Connor.