'We're expecting a bold show' - can Diamond make class count in a handicap? 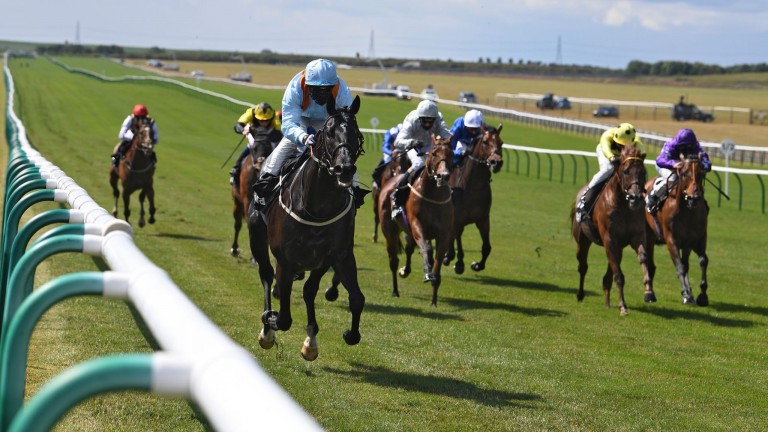 Marie's Diamond: has Listed and Group race form and drops down to handicap company for only the second time
George Selwyn
1 of 1
By Graeme Rodway and Charlie Huggins UPDATED 12:22PM, JUL 19 2021

This time last year Marie’s Diamond was competing in Group 2 company following an excellent third in the Queen Anne at Royal Ascot and, if he can reproduce that sort of form, he will make short work of this Class 2 field from the top of the weights off a mark of 102.

He was rated a peak 113 by the BHA and has a career-best Racing Post Rating of 115, but this year his highest RPR is 110 and that came when he was second in the Earl of Sefton at Newmarket on his seasonal return. He hasn’t bettered a figure of 106 in three runs since.

However, that still suggests he might not have regressed as quickly as his BHA mark suggests. If he were to run to 110 he would probably win, and even a 106 wouldn’t put him out of it. The race revolves around how much ability he retains and we might get a better idea here.

He faces a couple of horses who are on the upgrade and Shelir comes into that category.

The David O’Meara-trained five-year-old has twice run to his career-best RPR of 103 in his last five starts and that includes when beaten a short-head over course and distance last time.

He has gone up 1lb in the weights but may still be improving and looks set to run well again.

Tinker Toy is the other potential improver. He beat only one home in the Criterion Stakes at Newmarket last time, but that was a Group 3 and he takes a drop in class back in a handicap.

Tinker Toy had recorded an improved performance on each of his previous four outings, culminating in a career-best when winning at Newcastle in May, and he still looks unexposed.
Race analysis by Graeme Rodway

Mike Prince, syndicate manager for Middleham Park Racing, owners of Marie's Diamond
It’s only his second run in a handicap. The first time being when he had a wide draw at Sandown last time. He’s down to a mark of 102, which we think is handy. Considering the races he has been running in, this is calmer waters for him. He's also at his best when it’s fast ground which he’s rarely encountered. We keep managing to land him on good or good to soft, so he will certainly relish the conditions. We’re expecting a bold show.

David O'Meara, trainer of Shelir
He ran a lovely race last time at the track, where he was only narrowly beaten. He's in great form, loves the track and the ground should be grand for him as well, so we’re looking forward to going back up there.

Jim Goldie, trainer of Nicholas T
He's won over course and distance four times and he is in good form at home. The slow pace of the race at York last time out just didn't suit him.

What is required to win the Cambridgeshire? Graeme Rodway runs the numbers 'He deserved that' - Nayef Road out from shadow of Stradivarius with Listed win 'Why not the Guineas?' - Roger Fell dreaming big with Eldrickjones 'Genius' Duran Fentiman brings Silver Cup joy for Ontoawinner 'I bought her dreaming of the Oaks' - progressive Five Stars exciting owner Trainer views and tipster analysis before an ultra-competitive Ayr Silver Cup