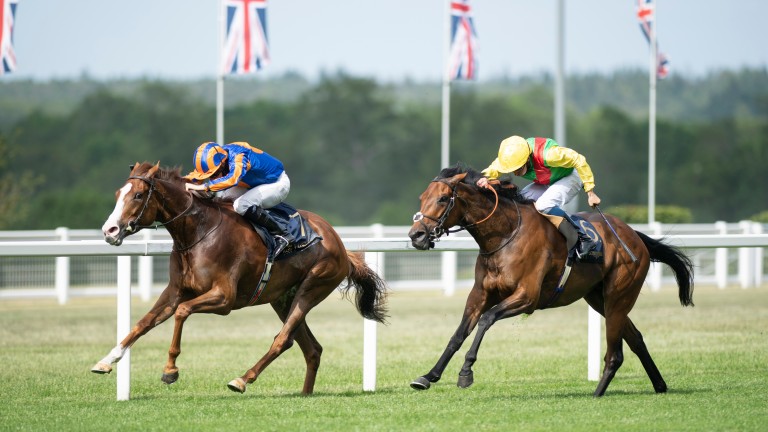 With a furlong to run in last year's Prix de l'Opera, Audarya looked set to follow up her first Group 1 success in the Prix Jean Romanet and provide Newmarket trainer James Fanshawe with his second win in this race after Speedy Boarding's success in 2016.

After travelling smoothly, Ioritz Mendizibal produced her towards the far side of the track and she briefly put her head in front. There is no denying she battled all the way to the line on heavy ground but was passed close to home by star fillies Tarnawa and Alpine Star.

Bleak weather forecasts indicate the ground will be even deeper this year, which could prove an issue for last year's third. For all that she went through the mud, Audarya certainly wasn't able to showcase the turn of foot we witnessed on firm ground at Keeneland on her next start. Wootton Bassett's progeny don't tend to appreciate too much cut, either.

Furthermore, Audarya enters this race on the back of a winless campaign and snatched defeat from victory in the Romanet in August. Her conqueror Grand Glory reopposes and the pair are sure to be closely matched once again off identical weights – there shouldn't be such a disparity in price.

Three-year-olds have won 14 editions of this race since the turn of the century and are well represented once again. Prix de Diane heroine Joan Of Arc represents trainer Aidan O'Brien, who will hope that she bounces back after a below-par run in the Prix Vermeille. Stablemate Snowfall also failed to perform that day, so perhaps take that form with a pinch of salt.

Andre Fabre, who hasn't won this race since 1997, has a good chance with Vermeille fourth Burgarita. The similarly unexposed Frankel filly Sibila Spain, who finished fourth in the Diane behind Joan Of Arc, may be best suited by testing conditions.
Race analysis by Tom Collins

Fanshawe satisfied with draw and ground for Audarya

With last year's winner Tarnawa a leading fancy for the Arc, Audarya looks well placed to go two places better than last year as she attempts to land a third Group 1 success in the Prix de l'Opera.

Audarya went down by just a length 12 months ago and advertised her wellbeing when headed only in the final stride by the reopposing Grand Glory in the Group 1 Prix Jean Romanet at Deauville in August.

Last year's Breeders' Cup Filly & Mare Turf winner was just three-quarters of a length behind another Qatar Prix de l'Arc de Triomphe contender, Love, in the Prince of Wales's Stakes at Royal Ascot back in June and Audarya's profile certainly stands up to close scrutiny.

"She's in good shape and I think her draw in three is probably better than being stuck on the outside," said her trainer James Fanshawe.

"It was very firm ground when she won the Breeders' Cup but she's run well on every type of ground and that won't be a problem.

"There are 15 runners and you just hope you get a smooth passage but we'll let [her rider] Ioritz Mendizabal get on with it. She travelled over well and is ready to go."

Runners from Britain or Ireland have won five of the last six runnings of the Opera and Audarya is joined in the field by Thundering Nights, trained by Joseph O'Brien, Joan Of Arc (Aidan O'Brien) and Zeyaadah (Roger Varian).

Joan Of Arc enjoyed her finest hour when landing the Prix de Diane at Chantilly in June and her trainer said: "We thought there was a chance she wouldn't get a mile and a half last time but we had to try it. We think that was the reason for the disappointing run but she's very comfortable at a mile and a quarter.

"She's uncomplicated, genuine and won't mind an ease in the ground."

Xavier Thomas-Demeaulte trainer of Ambition
She needed her first two runs this season and she has come forward on each occasion. She ran very well in this race last year on heavy ground and has won in such conditions so I'm not worried on that score.

Joseph O'Brien, trainer of Thundering Nights
The form of her last run is very good and she's meeting a lot of the same fillies again in this. We're hoping she can run into a place at the very least.

Andre Fabre, trainer of Burgarita and Babylone
Burgarita is a consistent, reliable filly and is in very good shape. The soft ground won't harm her chances and she will run a very good race. Babylone may not be the filly she was before.

Andreas Wohler, trainer of Palmas
This will be tough competition but she deserves to take her chance. She has been running on soft ground but it will be even softer so we really don't know if she will handle that.

Pauline Chehboub, co-owner of Rougir
If she gets a strong pace to run at, she's a serious candidate and I can't see her finishing out of the first five.

Jim Crowley, rider of Zeyaadah
If she ran to the form of her Nassau Stakes second to Lady Bowthorpe she would go very close. You can put a line through her run at Deauville last time as she lost many lengths at the start. She won on soft as a two-year-old but probably wouldn't want it heavy.

Christopher Head, trainer of Sibila Spain
Stall 11 is not ideal but I think it will be okay. She was jumping around this morning – she's so well. This is a hot Group 1 and it's the first time she's encountered older fillies so we're going in with a degree of humility.
Reporting by Lewis Porteous

1.50 Longchamp: why Andre Fabre's race record means we should take note of his Lagardere runner

3.05 Longchamp: the lowdown on Adayar, Tarnawa and more in the 2021 Prix de l'Arc de Triomphe

3.05 Longchamp: a blue day in Paris? Keith Melrose assesses who will come out on top in the Arc (Members' Club)

4.25 Longchamp: 'She's been there and done it' – Glass Slippers camp bullish before Abbaye bid

5.00 Longchamp: I've been trying to get Space Blues in the race for three years – Charlie Appleby

FIRST PUBLISHED 6:00PM, OCT 2 2021
It was very firm ground when Audarya won the Breeders' Cup but she's run well on every type of ground and that won't be a problem