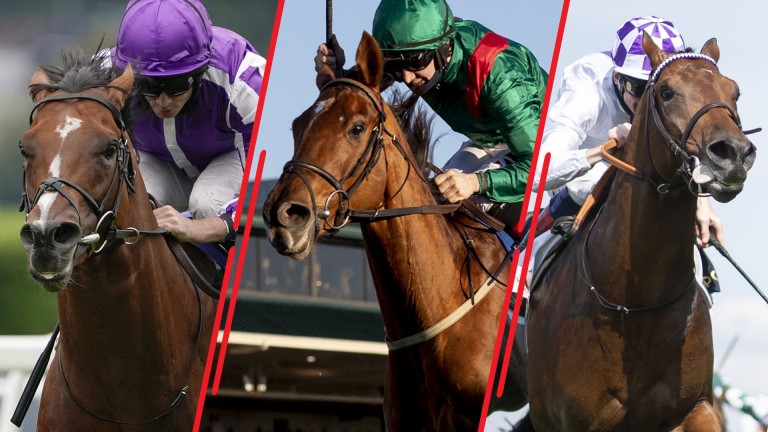 Aidan O'Brien says missing the Juddmonte International at York with St Mark's Basilica at the 11th hour because of a freak incident on the gallops is not playing on his mind as the superstar three-year-old seeks a fifth Group 1 win in a row.

St Mark's Basilica, who won the French 2,000 Guineas and French Derby, confirmed himself to be a bit special in the Coral-Eclipse when scooting past subsequent wide-margin Juddmonte International winner Mishriff and victory here would cement his status as one of the best horses in the world. 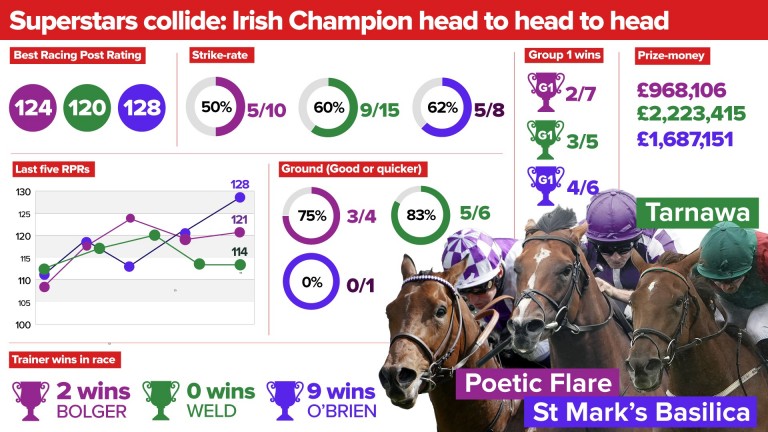 The gallops incident, in which his front shoe came off and cut his near-fore hind joint, is the best part of a month ago now and O'Brien reports his preparation for Leopardstown to have gone swimmingly.

He said: "After he won the Coral-Eclipse, the plan was to go to the Juddmonte and then on to the Irish Champion, but we obviously didn’t get to do that. Missing the Juddmonte is not playing on our minds because we've been very happy with him lately and everything has gone well with him.

"St Mark's Basilica is very straightforward. He's happy to follow along and he's very off-handed. The plan all along was that, if he was to run in this race, he'd be our only runner. He's so versatile and he quickens well."

'Tarnawa is in great order but, ideally, we would like a little bit more ease'

Dermot Weld would have preferred the heavy showers which hit a lot of Ireland on Thursday to have zoned in on Leopardstown but they seemed to skirt around the south Dublin venue so quick ground is likely to face his magnificent mare Tarnawa.

But that is not to say she will not cope with such conditions. She reeled in Magical in the Breeders' Cup Turf on what was officially fast ground at Keeneland so she is able to adapt to whatever meets her underfoot.

Weld said of his leading Arc contender: "She's in great order. I've been quite satisfied with her since her last trip to Leopardstown and her preparation has gone very well. With regard to the ground, we'll just have to take it as it is. There is nothing else we can do. Ideally, we would like a little bit more ease in the ground for her."

It will be the eighth outing of Poetic Flare's Classic campaign and only once has he finished out of the first two. That came in the French 2,000 Guineas on very soft ground at Longchamp just 15 days after his Newmarket heroics.

You could fall into the trap of thinking Poetic Flare's trump card is his toughness, but his class was the main factor in his victories in the 2,000 Guineas and the St James's Palace Stakes at Royal Ascot.

The Dawn Approach colt has never been beyond a mile but the way he hit the line in the Jacques le Marois at Deauville last month suggests he is certainly worth a try over ten furlongs as he was coming back at Palace Pier as the line loomed.

Jim Bolger has won the Irish Champion Stakes twice – with New Approach in 2008 and Park Express in 1986 – and in Poetic Flare he has a colt capable of completing the hat-trick.

If he relaxes in the early part of the race and gets into a good rhythm, he could have a major say in the outcome.

Sarsfield the odd one out but could he put it up to the principals?

Patrick Sarsfield is very much the odd one out as he is the only member of the four-strong field yet to win a Group 1 and the official figures suggests he needs plenty to go wrong for the others for things to go right for him.

Even if he finishes last, he will pick up €50,000, and Joseph O'Brien was not giving any secrets away about how he might be ridden – leaving it up to Declan McDonogh to decide what to do.

O'Brien said: "It's the million dollar question how the race will pan out but my horse is very straightforward and we can lead or we can drop in. I'm looking forward to seeing how he gets on and hopefully we get a cheque for our troubles.

"Declan will decide what to do. In a field like this, you can't really plan, and have to be alive to what your competitors will do. We’ll just break and see what happens."

FIRST PUBLISHED 6:00PM, SEP 10 2021
Tarnawa is in great order but, ideally, we would like a little bit more ease