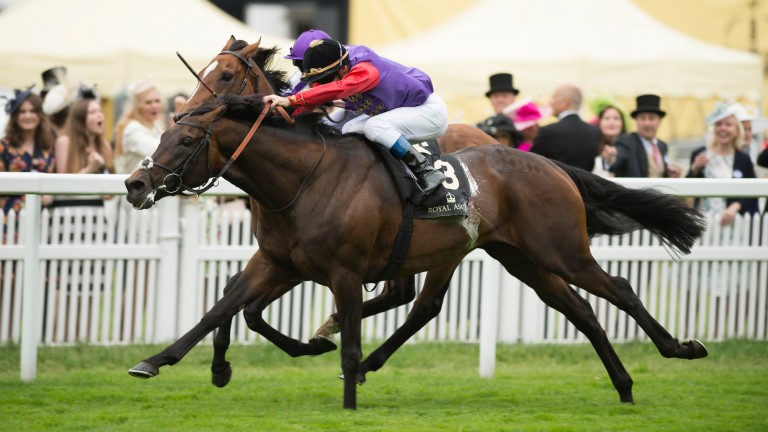 On one level – just above eye-level, actually – Royal Ascot is all about hats. Tall hats, big hats, small hats, hats that looked a good idea in the shop but not so much now, hats that the bookmakers make markets on, home-made hats made with love and slightly crooked stitches.

All these hats will be firmly in place – yet what the vast crowd at Ascot is really looking forward to doing on Saturday is taking those hats off and waving them in the air.

Right about 3.45pm would seem appropriate, for that's when Dartmouth could be carrying the Queen's colours to victory in the Group 2 Hardwicke Stakes, just as he did last year.

The five-year-old had the temerity – and the stones – to see off the implausibly tough Highland Reel in this race last year, and if that's taken as any sort of benchmark then this year will be easy, surely.

Oh, but it's never easy at Royal Ascot. Obstacles to royal success are everywhere – John Gosden is mob-handed again, just as he was in Thursday's Ribblesdale Stakes, and we know how that turned out.

His three contenders are headed by last year's Derby fourth Wings Of Desire, whose brother Eagle Top narrowly missed out in this race two years ago. Family honour is at stake, yet surely such internal affairs are easily set aside for Queen and country.

Dartmouth proved he had a heart almost as capacious and true as the utterly magnificent Big Orange when grittily grinding out a neck success in the Yorkshire Cup on his seasonal debut.

Before the sweat had cooled, the Queen's racing manager John Warren had advised: "I suspect Sir Michael [Stoute] will be looking at the Hardwicke again, as it's always fun for the Queen to have a runner at Ascot."

Mice and men may get it wrong now and again, but regal plans are of a different stripe entirely. With top jockey-elect Ryan 'Crockett' Moore – who has evidently been searching through his Miami Vice box-sets for inspiration given the way he pushes his sleeves back these days – in the saddle then Plan A might just spark a red-letter day.

The pure purists among us will consider the Hardwicke a mere hors d'oeuvre to the feast offered up in the Group 1 Diamond Jubilee Stakes, in which the slightly slower top-class sprinters get their chance without the danger of catching a cold as Lady Aurelia swooshes by.

Victory for the hugely popular Limato would put Ascot's carpenters back to work nailing down the roof following its Dartmouth-inspired raising 40 minutes earlier, and his owner Paul Jacobs will be hugely encouraged by the right sort of clouds in the Berkshire sky this week (ie. none at all).

The lugubrious training genius who has charted Limato's career thus far doesn't tend to become hugely encouraged by anything, but Henry Candy won this last year with Twilight Son and it is safe to say Limato has a little more ooomph about him than his former stablemate.

The Tin Man, named by an Irishman after his trainer James Fanshawe, has course-and-distance laurels and will be a tough cookie to crumble, while the Yankee sprinter Long On Value might yet prompt Bill Mott to enjoy another Cigar.

Those who are thinking of siding with Librisa Breeze should not grow concerned if Robert Winston has yet to make his move entering the final 50 yards. It'll be a thriller.

The Wokingham Handicap, as impenetrable as the mind of a woman and just as intriguing, will occupy those whose lucky pin is not at the menders, as well as those who are still glued to the subject of track bias.

Which side is the best to be on? This side, that side? Any side is better than going over to the dark side of the middle ground, but really, in this sort of nerve-shredding cavalry charge you simply pays yer money and takes yer choice, whereupon the bookie keeps yer money and buys himself a new car with it.

I'll look clever if Edward Lewis wins it, but you could choose ten horses and not have one in the first six. What fun!

September could be hotter than June

The top and tail of the final card at another memorable Royal Ascot concerns Aidan O'Brien, whose march to the trainer's title may well be assisted by the august presence in the Chesham Stakes of the enormously exciting September, who hacked up in a Leopardstown maiden this month and has already been earmarked for the 1,000 Guineas and the Oaks.

She's going in the right direction, which is not really something we can say about last year's Derby runner-up US Army Ranger, who suffers the indignity of/is offered a new opportunity to shine in (delete as preferred) the Queen Alexandra Stakes, over a mile further than he's ever run before.

Once was the day that Derby winners ran in the Gold Cup, but US Army Ranger is surely making his own little bit of history. That's what Ascot is all about, though, a glorious history and the thrilling present coming together for the undiluted pleasure of all.

That's something we can take our collective hat off to – unless it's already off, of course, for Her Majesty.

FIRST PUBLISHED 6:00PM, JUN 23 2017
Those who are thinking of siding with Librisa Breeze should not grow concerned if Robert Winston has yet to make his move entering the final 50 yards

'He could be a Guineas/Derby horse' - O'Brien excited by Point Lonsdale Four things we learned on the fifth and final day at Royal Ascot 'There is no denying the phenomenal training that has gone into Rohaan' Ascot due a fitting finale with racing's greatest fan set to star on day five Duchess of Cornwall's prominence could offer clues to the future of royal racing Royal approval: King's Lynn and Oisin Murphy going all out for Ascot Group 1