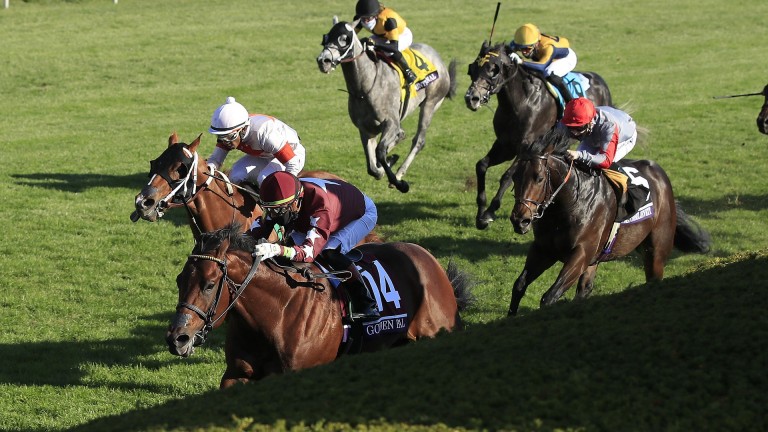 Golden Pal, who finished second behind The Lir Jet for Royal Ascot's favourite visitor Wesley Ward in the Norfolk Stakes in the summer, ran out a convincing winner of the Breeders' Cup Juvenile Turf Sprint, in which Ubettabelieveit ran a screamer, finishing third for North Yorkshire trainer Nigel Tinkler.

He was no match for the impressive winner as the 2020 Breeders' Cup kicked off at Keeneland on Friday, but still emerged with plenty of credit under Rowan Scott, who had partnered the juvenile to a shock 40-1 success in the Flying Childers at Doncaster's St Leger meeting in September.

Golden Pal, however, had too much for his rivals, which included second-placed Cowan, and earned a quote of 6-1 from Betfair for the Commonwealth Cup at Royal Ascot next year after he gave Ward a second victory in the race following success for Four Wheel Drive 12 months ago.

Like then, Irad Ortiz was on board, riding his tenth Breeders' Cup winner on a horse who was Ward's fourth at the meeting.

Betfair also quoted Ubettabelieveit, a Kodiac colt, for the Commonwealth Cup, offering quotes of 16-1 (from 33).

Golden Pal, whom owner-breeder Randy Lowe revealed is named after his late friend and fellow racing enthusiast John C Mabee, is 10-1 with Ladbrokes for the Commonwealth Cup and 5-1 for the King's Stand, which could also be an aim.

Ward said: "He's amazing, although I got a bit worried as Irad kind of took a hold of him and he lost a little moment, but then he accelerated down the lane and is a champion colt. Thank God Randy gave him to me to train.

"I got a little worried in the last part and was grabbing my son, but we got there."

'The second biggest moment of my life'

The aforementioned Lowe was understandably chuffed as well, especially as he bred Golden Pal, who is by Uncle Mo out of Lady Shipman, second in the Breeders' Cup Turf Sprint for the owner in 2015.

"This is probably the second biggest moment of my life, the first being when I got married to my lovely wife," he said.

"When he was born, I went into his stall and normally the mares are very protective, but I stood there, put my hand out and he came right over to put his chin in the palm of my hand. I knew from then on he was going to be something special.

"We couldn't go to Royal Ascot because of Covid-19, but we were screaming and hollering and I couldn't believe he got caught."

Of Ubettabelieveit, Scott said: "He got a good run round there. He was just a little bit slow here because his usual running style is coming from off the pace. He picked up well but the first two were away and gone. I'm really happy with him. He ran a blinder."

Mother Earth, the horse who was third in the Fillies' Mile at Newmarket recently after many had thought she had finished eighth, hit the frame in a big race again when claiming second behind Aunt Pearl in the Juvenile Fillies Turf.

Trained by Aidan O'Brien, Mother Earth was saddled incorrectly at Newmarket by the trainer's staff, who, having been based in Britain due to coronavirus restrictions, were unfamiliar with her and stablemate Snowfall.

The BHA last month swapped their places and Mother Earth performed respectfully once more, running on encouragingly under Ryan Moore, although the impressive Irish-bred winner, who could have Royal Ascot aspirations next year, was long gone.

Miss Amulet, second in the Cheveley Park Stakes for O'Brien's Irish counterpart Ken Condon was third, while Wesley Ward and Frankie Dettori teamed up to finish fourth with Campanelle, who won the Queen Mary at Royal Ascot and followed up in Deauville's Prix Morny.

Reacting to the result, Paddy Power left Mother Earth at 20-1 for next year's 1,000 Guineas and were unmoved by Miss Amulet, who is 33-1.

Aunt Pearl, a daughter of Lope De Vega bought at a Newmarket sale 13 months ago, is trained by the 40-year-old Brad Cox, a Kentucky native who set up in 2004 and now has a string of more than 150 horses.

He knows a good filly when he sees one, winning the Kentucky Oaks with Monomoy Girl in 2018 and this year with Shedaresthedevil.

"She's a nice filly," he said. "I don't think there's any doubt how special she could be and when you dig into her pedigree, she might be able to go beyond a mile. She's a super-talented filly and I'm very proud of her. We've been here before and it's huge." 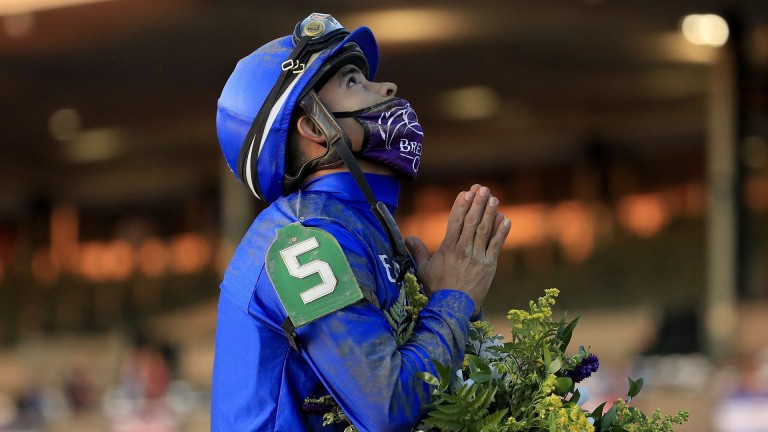 It soon became a red-letter day for Brad Cox, who recorded a fine double in the Juvenile with Godolphin's homebred Essential Quality.

The trainer had been on three Breeders' Cup winners, but made that five in the space of some 50 minutes, although it was a first for jockey Luiz Saez, who was aboard Maximum Security in last year's Kentucky Derby when the pair finished first only to be placed 17th after stewards deemed interference had occurred.

"I'm blessed," he said. "My first day with him I knew he was going to be a super horse."

Cox was also full of praise, adding: "It was a tremendous effort by this horse. He overcame a lot today and is a nice colt, while distance is no issue to him – he'll run all day. I'm very proud of him and happy for the Godolphin organisation. What a horse.

"He stayed on and has an amazing amount of stamina. We'll enjoy this one, but the Kentucky Derby will be our goal." 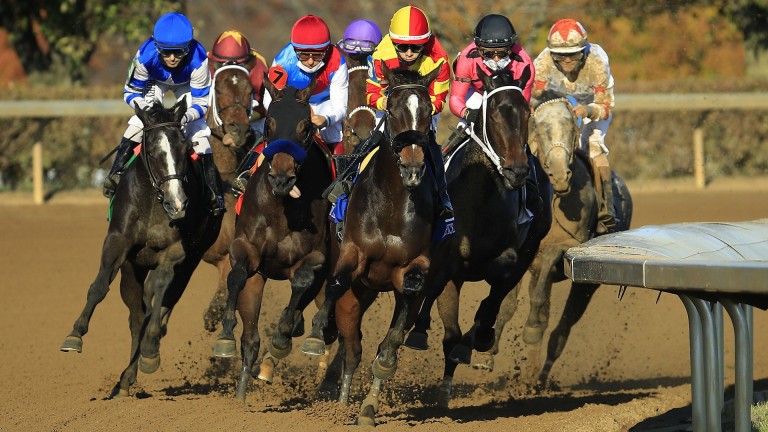 It had been a long time between Breeders' Cup drinks for trainer Butch Reid, who was back in the big time after Vequist landed the Juvenile Fillies under a cute ride from Joel Rosario.

The Pennsylvania-based Reid, who has been training since 1983, won a Breeders' Cup race with his first runner when Afleet Again struck in the Marathon in 2011.

"She's really thrived on the air and weather here," he beamed of Vequist, who was reversing Grade 1 Frizette Stakes form with Dayoutoftheoffice.

"She looked great coming into the paddock and I knew we'd be laying up close as she's a sharp filly with good speed. Se doesn't mind the inside and I told Joel to break sharp and put her wherever he wanted.

"I don't know if you ever have that feeling that it's your day, but she'd been doing very well and is a talented filly – you put those together and sometimes it comes out in a victory.

"This is sensational. It's my second win at the Breeders' Cup but my biggest by far."

Read more from the Breeders' Cup:

'I came here thinking I could win them all!' – Bob Baffert joins What A Shout

FIRST PUBLISHED 7:50PM, NOV 6 2020
I got a little worried in the last part and was grabbing my son, but we got there

Violette victory sparks joy just days before centenary of 'bravest of the brave' No July Cup bid for Campanelle as Wesley Ward takes US raiders back home 'I didn't say that. He's wrong' - Dettori counters Murphy best-horse claim A day when two big decisions had to be made - officials at Ascot got both right Did the stewards get it right in the Commonwealth Cup? Experts have their say 'Oisin's horse drifted about eight lanes' - Commonwealth Cup result reversed