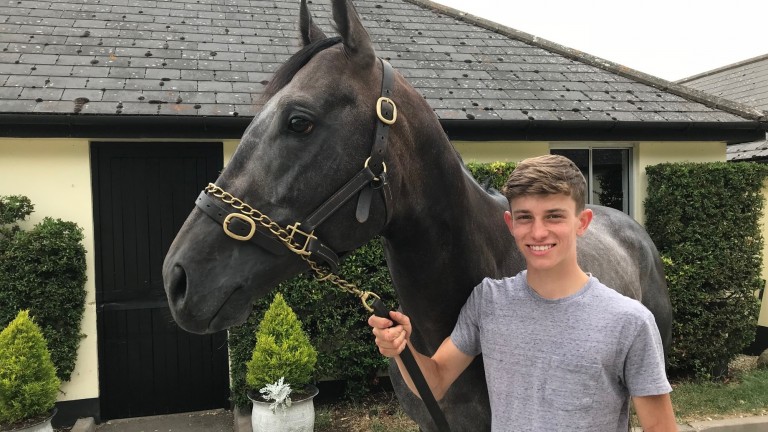 George Rooke: could be a red letter day for the young rider with Cosmelli in the Northumberland Plate
1 of 1
By Andrew Dietz UPDATED 6:53PM, JUN 26 2020

All-weather apprentice champion George Rooke has admitted to feeling some nerves about his ride on lively outsider Cosmelli in the historic Northumberland Plate.

However, the 19-year-old could not have picked a better mount for such an occasion as the Gay Kelleway-trained seven-year-old won the Plate consolation race two years ago and is having his third run in the main event.

"It's the biggest day of my career so far and I'm excited," said Rooke. "There are also some nerves as you've got to be on top of your game in a race like this and there'll be a lot of pressure. Cosmelli finished fifth in the race last year and is in better form this time round."

Rooke, who is apprenticed to Richard Hughes, has made excellent progress since starting out two years ago to the month. He gained 24 wins during the winter season and has notched another three since 5lb claiming apprentices were allowed to resume at the start of last week.

"It was annoying watching horses I'd won on before running, but the timing of our return has worked out well," he said. "With a lot of the big jockeys at Royal Ascot, I had a few rides and have built up my racing fitness."

Rooke has gained 31 winners in total but is waiting on the outcome of a BHA investigation, which could result in him being stripped of some of his winners after it emerged he failed to inform the authority of three victories he had in Jersey.

Kelleway is predicting big things from Rooke, who will also ride Fleeting Visit in the Northumberland Vase (4.10).

"I gave Adam Kirby and Saleem Golam their first winners and George is one of the best apprentices I've ever had," she said. "He has a light weight, lots of natural talent and is a boy going places."

Alan King, trainer of Rainbow Dreamer
I do think he'll run well but I'm worried he might be weighted out of it. He's on a career-high mark after his run in the Sagaro and there could be others lurking lower down. He does seem to love the all-weather surfaces and might improve a little for his run last time, but it's a tough ask.

Hugo Palmer, trainer of Collide and Caravan Of Hope
I wasn't going to declare Collide, but he's full of himself. The ground was just too quick at Ascot last week when Ryan [Moore] did not give him an overly hard race. I was hoping to run Caravan Of Hope at Ascot with some give in the ground but he didn't get in the Golden Gates Handicap. This looks a good option and he's been crying out for a step up in trip. He got no luck with his draw at Wolverhampton last time and both of my runners have had no luck again in stalls 17 and 19. They go there in great heart, but if either wins the jockey will be getting a lot of praise for getting it right.

Charlie Fellowes, trainer of Carnwennan
He was very impressive in the Northumberland Vase last year and a big field really suits him as does a flat, galloping track on the all-weather. There is a lot in his favour.

John Ryan, trainer of Sevenna Star and Hiroshima
Sevenna Star was a serious horse and if he can bring his class back for being gelded, he could be well handicapped. Hiroshima has his first try over this distance, but it shouldn't be a problem.

Gay Kelleway, trainer of Mukha Magic and Cosmelli
Mukha Magic has been thrown in as a wild card. He ran well at Ascot and I'm hoping it's not taken too much out of him. He's a lovely horse who stays all day. Cosmelli loves the track and has a very light weight with George [Rooke] taking off 5lb. He was fifth in the race last year and it's been his objective since the beginning of the year. His work has been brilliant this week and I don't think I've ever had him better.

David Simcock, trainer of Smart Champion
He had a hard race at Ascot but seems to have come out of it well. He ran over two-miles-four there and is a horse that needs an extreme test. He has winning course and distance form over a couple of his rivals and it's a race that should suit.

William Muir, trainer of Just Hubert
He has a nice weight and goes there with a realistic chance, if handling the Tapeta. He's a character who likes his routine, and he was going well on his comeback at Haydock before blowing up. That run will put him spot on.

Roger Varian, trainer of Australis
He's a lovely horse who has the right profile for the race. He didn't race as a two-year-old and is a typical late-maturing type who looks a good deal stronger for the time over the winter. He has won on synthetic surfaces, and although he hasn't raced over two miles before, I don't see that as a problem. He won a tidy race at Wolverhampton a couple of weeks ago and we've been very happy with him since.

Tom Dascombe, trainer of Rajinsky
He won over a mile-six at Wolverhampton and I'm sure he'll stay. The step up in trip won't do him any harm at all and he's only got 8st 2lb. His jockey Jane Elliott was third in the race last year on a similar type called Proschema. He's got a reasonably good draw as well.

Dan Skelton, trainer of Denmead
We didn't think he'd get in so we're delighted he has. He's got no weight and ran well at Pontefract the other day, so hopefully he's got some sort of chance.

FIRST PUBLISHED 6:00PM, JUN 26 2020
I gave Adam Kirby and Saleem Golam their first winners and George is one of the best apprentices I've ever had