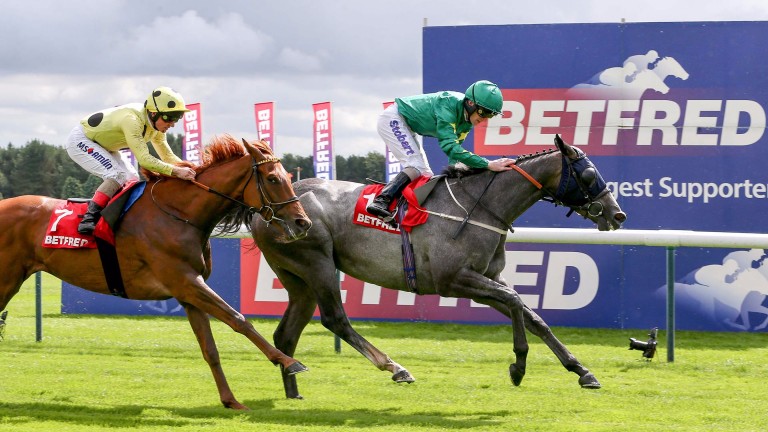 Joe Fanning produced a brilliant front-running masterclass aboard Frankuus, who was wearing blinkers for the second time, to lead from pillar to post in the Group 3 Rose of Lancaster Stakes.

Winner of the Listed Ascendant Stakes on soft ground as a two-year-old before winning a Group 3 at Chantilly, the son of Frankel again showed his liking for Haydock’s saturated turf as he bounded out in front ahead of Francis Of Assisi, Ayrad and hot favourite, Laraaib, who was coming into this unbeaten in three starts.

Mount Logan made an eyecatching mid-race move under Andrea Atzeni, but Frankuus was encouraged into a clear lead entering the straight under Fanning, which he maintained coming into the final furlong.

Mount Logan closed to within three-quarters of a length at the line, but never looked like getting past the long-time leader. Laraaib – sent off a well-supported 2-1 – could never land a blow in third.

Mark Johnston, who saddles stable star Permian in the Group 1 Secretariat Stakes at Arlington Park later on this evening, said: "I felt he was stuck between the top class races and handicaps as he was running in good races and not getting involved in the shake-up –apart from last time when he ran a great race.

"On paper he had a little bit to find but he has won here before and handles soft ground so we knew conditions were right for him."

He added: "It's nice to get another Group race under his belt and it's pleasing for the owners."

FIRST PUBLISHED 2:39PM, AUG 12 2017
He has won here before and handles soft ground so we knew conditions were right for him

Newbury to host charity race to celebrate Queen's Platinum Jubilee Are Grade 1 ambitions justified for improving Tommy's Oscar? Jonbon 'in great form' ahead of Supreme prep run but will he justify the hype? Tracks not expecting any issues for stellar cards on a super Saturday