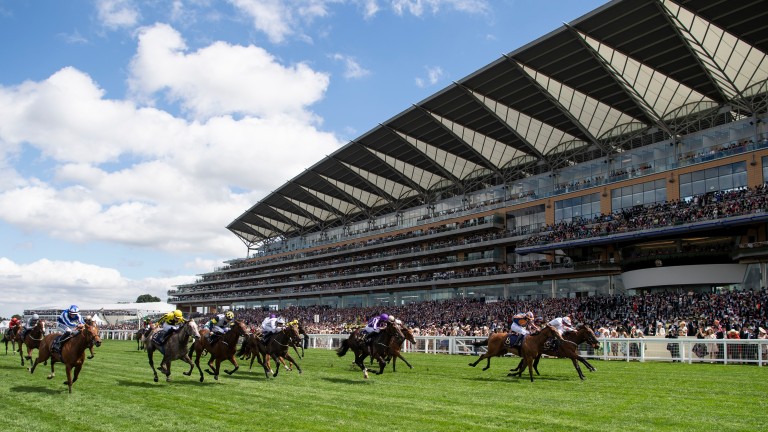 Signora Cabello: filly won at Royal Ascot after landing the Marygate
Edward Whitaker / racingpost.com/photos
1 of 1
By James Burn 6:08PM, MAY 16 2019

A five-furlong Listed event for juvenile fillies is an obvious place to keep an eye out for Royal Ascot pointers and the Marygate has served well as a trial for Flat racing's most fashionable week.

Ceiling Kitty (2012) and Signora Cabello (2018) have completed the Marygate-Queen Mary double in the past ten years, while Misheer was second and Patience Alexander third in the Albany at Ascot after winning on the Knavesmire.

Marygate winners in the Queen Mary

Plenty of these look the part, including Fleeting Princess, whose trainer Jeremy Noseda had a two-year-old winner at York on Wednesday with Bomb Proof, while Archie Watson, who saddles the unbeaten Lady Kermit, can do little wrong with his juveniles at the moment.

Richard Fahey, trainer of Baileys In Bloom and Mighty Spirit
I'm happy with them and they're early sharp two-year-olds. Baileys In Bloom did nothing wrong when winning at Beverley, while Mighty Spirit got left at the start at Newcastle, but I hope she's more streetwise because she ended up running well. I've no issues with the ground for them.

Mark Johnston, trainer of Companion
You just don't know with this race now, it's like a prequel to the Queen Mary. She has one run under her belt and we're in the same boat as so many others and it will be find out time. I'm not sure about whether the draw helps or hinders.

Jeremy Noseda, trainer of Fleeting Princess
We'll find out how nice she is in this race. She's a filly I like a lot but this is a much bigger test of her. She's in good order and I'm very happy with her. We had this race as the plan before she ran at Yarmouth, so hopefully she can put in a good performance.

Archie Watson, trainer of Lady Kermit
She's in great order at home and I hope her class will show because she is good.

Gay Kelleway, trainer of Lady Quickstep
She's always been quick and on the sharp side, but I've not really got any other two-year-olds to test her because my others either want further or are a bit backward. I don't understand why she hung when she won at Brighton – it must have been greenness because she doesn't hang or anything at home – but she did it so well. If she'd kept straight she'd have won by eight lengths. I don't think we beat a lot, but she's come on for the race and I think she's got a good draw in 20. The ground should be fine.

Karl Burke, trainer of Macho Touch
She has a better chance than it might appear from the bare form of her debut sixth at Newcastle. She wasn't fit that day and she got very tired. Ours looks a nice filly judged on her work at home and I'd be disappointed if she's not winning soon.

Richard Hannon, trainer of Separate
She was unlucky not to win on debut at Newbury last time when she lugged slightly left in the last furlong, probably due to tiredness on the soft ground, so she'll be much happier on this surface and will have come on plenty for that experience. She is a filly with a lot of ability and one we like a lot, so I'd be hopeful she can go close; that said, this looks extremely competitive.

Charlie Hills, trainer of Silver Start
She was good when winning at Bath and is a talented filly. This is a step up, but most of the field are in the same boat coming from maidens or novices. It's a big field so she'll need some luck, but she'll be fine on the ground and has plenty of pace.

All of York's runners and riders on Friday

The best bets of the day

Read exclusive previews of the big races from 6pm daily on racingpost.com and the Racing Post mobile app