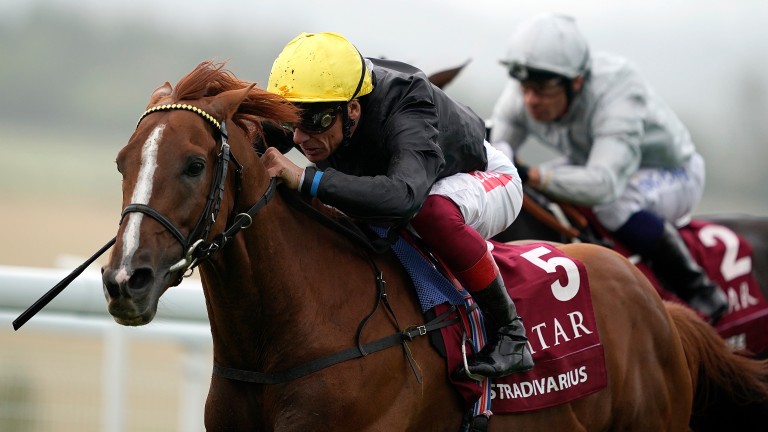 The best presents are the unexpected ones. On the 253rd anniversary of the first running of the Doncaster Cup, John Gosden has surprised everyone by gift-wrapping supreme stayer and two-time £1 million bonus collector Stradivarius to Town Moor and his legions of fans.

Stradivarius, who last year went straight to Champions Day at Ascot from York, will return to Doncaster for the first time since finishing third in the 2017 St Leger, seeking to extend his unbeaten record to ten races.

The Bjorn Nielsen-owned star will also be aiming to emulate the great Double Trigger, another chestnut who was the last horse to complete the stayers' triple crown in the same year when winning the Gold Cup, Goodwood Cup and Doncaster Cup in 1995.

One of Stradivarius's enduring qualities is that he only ever just does enough, with his biggest margin of victory a length and a half since he started his famous winning spree with a three-length success in last year's Yorkshire Cup. 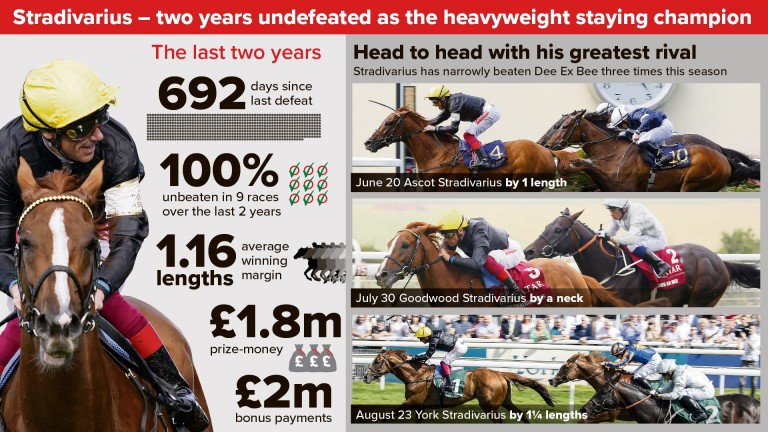 Frankie Dettori, who has been aboard Stradivarius for eight of those nine victories, said: "You know what to expect from him, he wears his heart on his sleeve and is a worthy favourite.

"We're taking it one race at a time but I suspect he might go back to the Long Distance Cup at Ascot after this."

Could any of the others cause a huge upset?

Max Dynamite, second to stablemate Thomas Hobson in the race last year, has something to find on the two principals but he does possess some interesting back form, having twice been placed in the Melbourne Cup.

"He's been a fabulous horse for us but it's hard to find winning opportunities these days," said trainer Willie Mullins' son and assistant Patrick. "Stradivarius is very good and we're just hoping he can run well and get some good placed prize-money."

Barsanti, a staying-on fifth in the Ebor, makes his first start beyond 1m6f for trainer Roger Varian, who said: "He was desperately unlucky at York – had he got the room when he needed it, it could have been a very different story. Stradivarius will be hard to beat but if he gets the trip he could run very well."

The trip should hold no fears for Cleonte, who won the 2m5½f Queen Alexandra Stakes at Royal Ascot in June.

Trainer Andrew Balding said: "Obviously it's a strong renewal and he's got it all to do. He stays well, it's good prize-money and it tees him up for some autumn objectives."

FIRST PUBLISHED 6:00PM, SEP 12 2019
You know what to expect from him, he wears his heart on his sleeve and is a worthy favourite