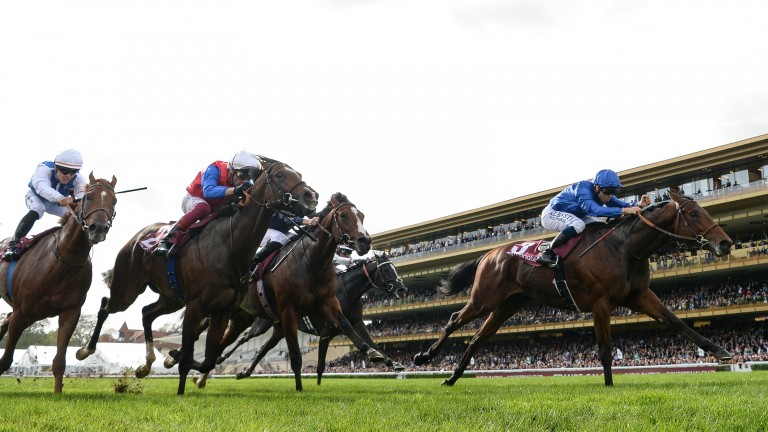 Nine colts and 12 fillies have been declared for the first two European Classics of the season, the Emirates-sponsored Poule d'Essai des Poulains and Pouliches.

Andre Fabre will be strongly represented in both races, with Alson set to join ante-post favourite Victor Ludorum and Coolmore's Arapaho in the Poulains, rather than wait five days for the Qipco 2,000 Guineas at Newmarket.

Alson had been backed for Newmarket after Fabre had highlighted him as a possible for the Guineas earlier this month.

But the difficulties surrounding travelling and the long-running uncertainty over whether British racing would resume as scheduled next week, as well as the transfer of the French Classics from Longchamp to the straight mile at Deauville have changed calculations for a number of owners and trainers in the last three weeks.

"The Guineas was never more than an option," said Fabre. "It became clear some time ago we couldn't travel."

Frankie Dettori rode Alson to his Group 1 success last October on the son of Areion's last start for trainer Jean-Pierre Carvalho but with quarantine restrictions in place, Vincent Cheminaud takes the ride.

Ladbrokes reacted to the news of Alson's declaration by cutting him into 9-2 (from 6) for Monday's race.

Tropbeau has been favourite for the Poule d'Essai des Pouliches ever since a cosy victory in the Prix de la Grotte at Longchamp and will line up alongside stablemate Tickle Me Green.

Mauricio Delcher-Sanchez is one trainer who is far from happy with the decision not to attempt to replicate the Longchamp version of the two Classics around a right-hand turn, despite the fact Marieta enjoyed two wins last year on the straight course at Maisons-Laffitte.

"I am a bit surprised they never thought of running on the round course," said Delcher. "The Poules d'Essai in France are traditionally run around a turn and the 1,600 metre [mile] track at Deauville gives you the entire length of the back straight for the field to sort themselves out. I don't see the interest in running it over the straight course, and they could have at least consulted the professionals."

The Poulains and Pouliches were run over the straight course at Deauville in 2016 and 2017 during the redevelopment of Longchamp.

FIRST PUBLISHED 10:32AM, MAY 29 2020
The Guineas was never more than an option, and it became clear some time ago we couldn't travel